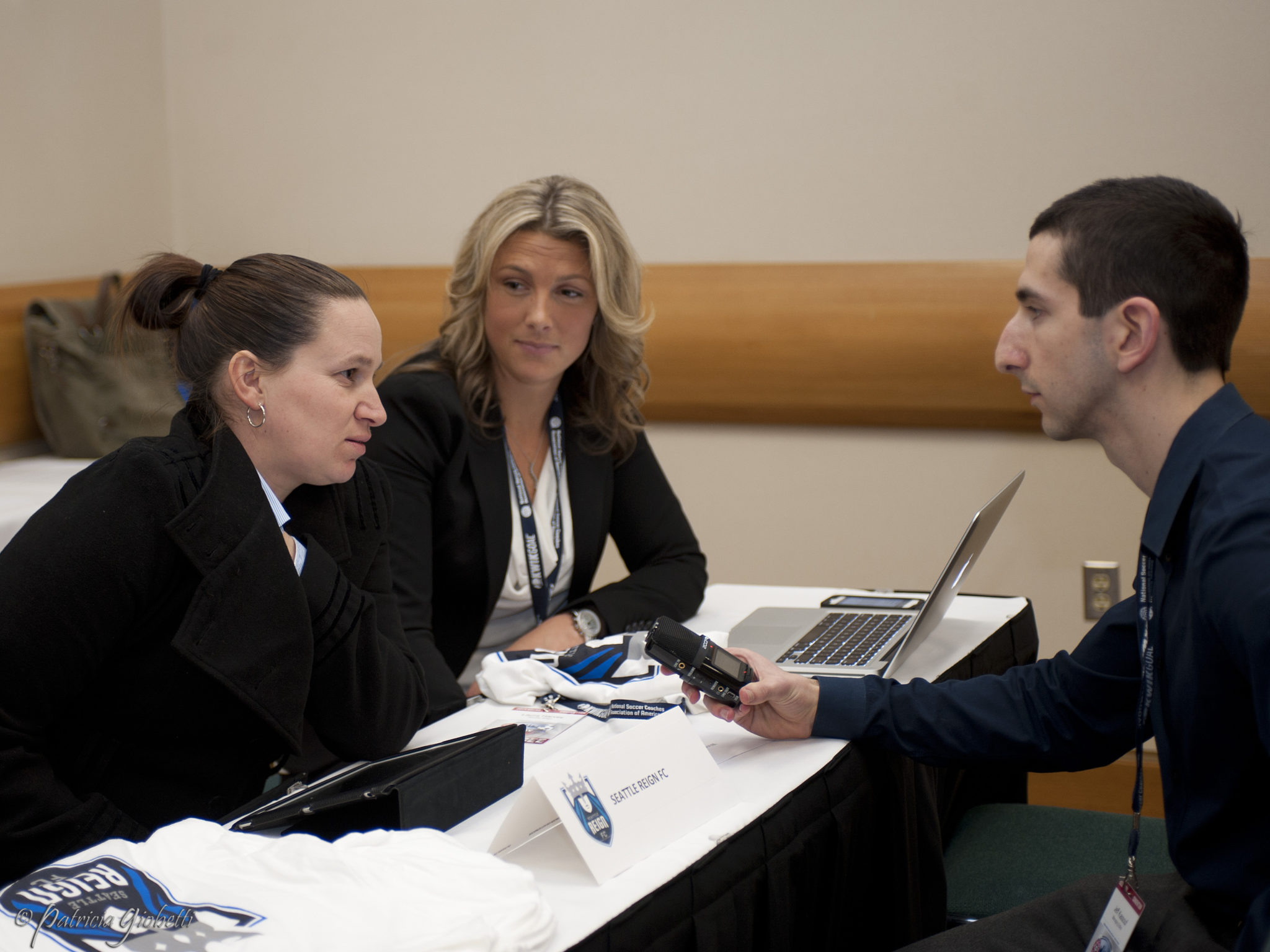 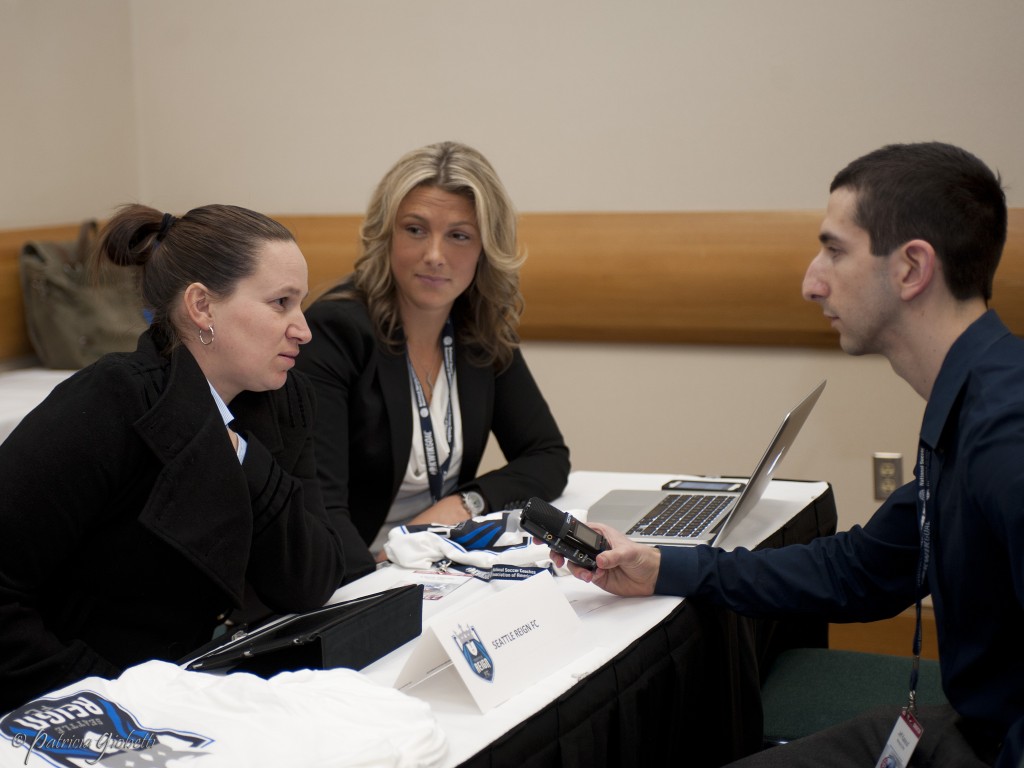 A Nike shirt appears in the bottom left of the photo as Seattle's Laura Harvey and Amy Carnell talk to yours truly. (Copyright Patricia Giobetti | http://www.printroom.com/pro/psgiobetti)

On Monday we learned NWSL news on Twitter. That’s cool, I guess. On Tuesday came more league news, this time from a team’s Facebook page. Next we’ll have Google Chat press conferences and uniform leaks on Pinterest.

Of course, they followed that up on Twitter to confirm the news that Amy Rodriguez is pregnant.

We already knew the season would begin on April 13, but now we know that the championship game will take place on August 31. Mark your calendars. The final schedule could come by Feb. 15 (coincidentally, a Friday — NWSL seems to like to break news on those days).

This inaugural season is likely shorter than the NWSL season will/should be in the future. By the above time frame, it’s only a four-and-a-half month season. And ending on August 31? Expect players to have European deals lined up to keep playing through the fall and winter months.

The team expects to live stream games for free (according to the comments section of that post).

Also interesting is a note about team uniforms:

Kits – All NWSL teams will have kits supplied by a soon-to-be-named sponsor (which we much appreciate!). We’re working with the sponsor on the design now, but won’t have kits available to purchase until just before the season.

It’s been rumored since the start of the league that the U.S. Soccer-Nike relationship would carry over to the NWSL. Considering teams had Nike gear with their logos splashed on them at the draft on Jan. 18, it’s a pretty safe bet that this means Nike is supplying uniforms for the league. See the photo above for an off-centered look at Seattle’s dri-fit shirt from the draft and the below photo, with goalkeeper Jill Loyden holding a Nike Sky Blue FC shirt. 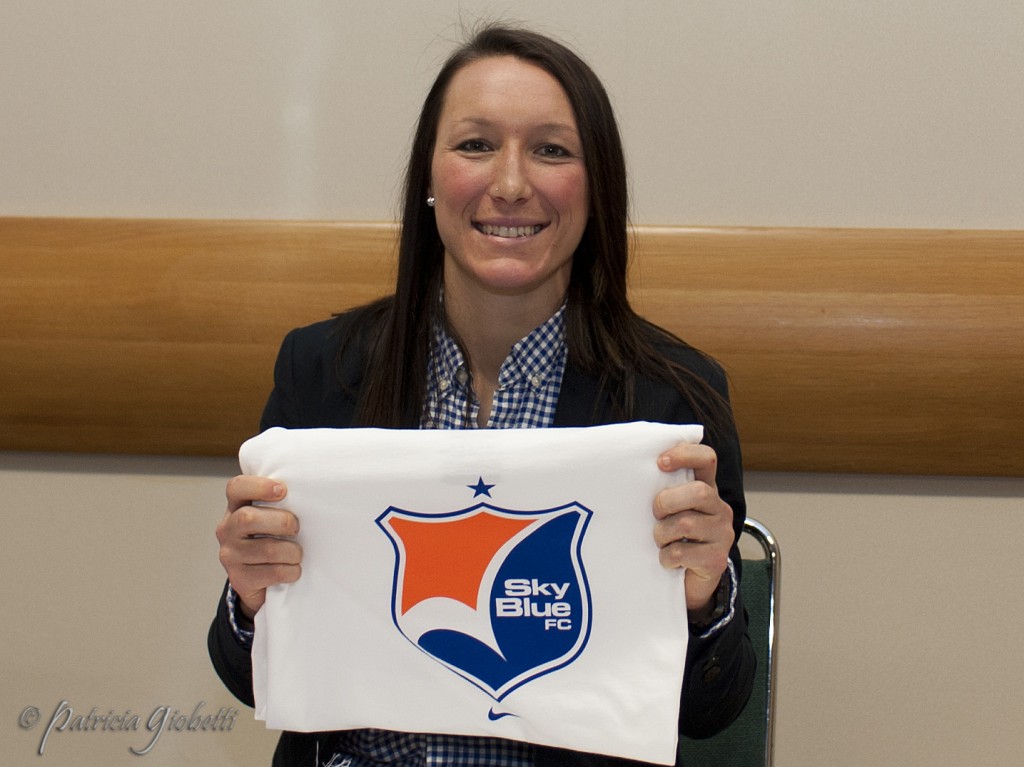 Here’s a quick (ok, a super wordy) update on some stuff we’re working on:

Tickets – Ticket sales are exceeding our expectations. If you want a VIP table or Premium Grandstand seating you’ll want to move quick—both will be sold out soon. Single match tickets and Group tickets will be available by mid-March.

Squad – Reign FC has agreed to terms with three new players, including one international, which we will announce as soon as contracts are executed. Expect to hear more by early next week. Additionally, the supplemental draft (which includes players not currently under contract by a NWSL club) will happen next Thursday, Feb 7. More details on the supplemental draft to follow soon. We’ve also got a player-related update that we’ll share tomorrow AM.

Kits – All NWSL teams will have kits supplied by a soon-to-be-named sponsor (which we much appreciate!). We’re working with the sponsor on the design now, but won’t have kits available to purchase until just before the season.

Merchandise – We are negotiating with a retailer and supplier on Reign FC apparel. Our best estimate is that it will be early March before we have gear available for sale. We’re dying for some gear ourselves, so we promise we’ll move this along as quickly as possible.

Website – We’re wrapping up a small, temporary site that we plan to launch early next week. It will be limited in scope, but should suffice until we launch our full site in April, prior to the start of the regular season.

Open Tryouts – We plan to do open tryouts, but have not yet set a date. We’ll update you as soon as we’ve got more info to share.

League Schedule – We hope to have a final schedule from the league by Feb 15. We’re working with the league to limit mid-week matches (expect 3-4) and avoid conflicts with Sounders FC matches (we’re shooting for zero conflicts).

Regular Season – Scheduled to begin the weekend of April 13. The season will conclude with a Championship match on Saturday, August 31.

Whew! Feels good to get that all out…now we’re back to work!