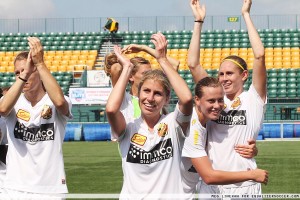 McCall Zerboni will return to the Western New York Flash for the 2013 National Women’s Soccer League season, she tweeted on Monday.

The news comes as little surprise, but is still a major free agent signing for the Flash. Zerboni was one of the unsung heroes of the 2011 WPS champion Flash team and captained the team during last year’s WPSL title-run.

If Western New York can bring back some of its best players from the last two years (Becky Edwards and Brittany Bock should be high priorities), the Flash should be a force once again. Western New York already has U.S. stars Abby Wambach and Carli Lloyd as well as Mexican youngster Veronica Perez through allocation.