Rapinoe takes next step in changing the game 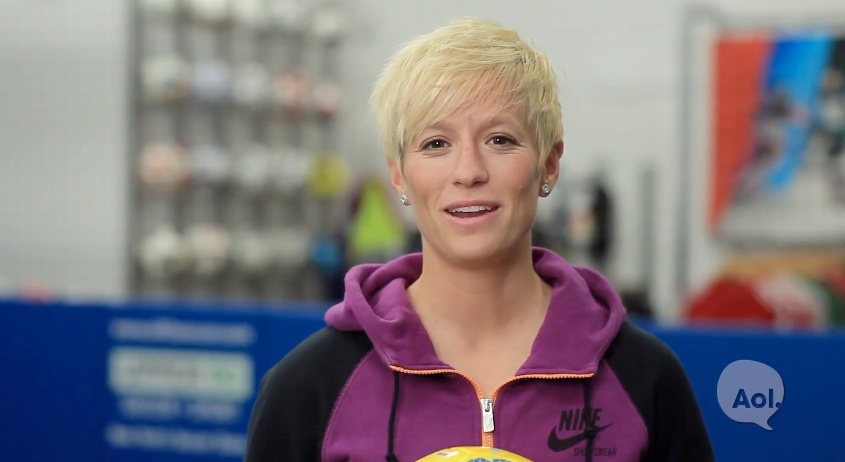 One of the Equalizer’s top moments of 2012 was Megan Rapinoe’s coming out before the London Olympics, and Rapinoe hasn’t slowed down in the start of 2013.  She was allocated to the Seattle Reign FC after signing a short-term contract with Olympique Lyonnais, and she scored in her first appearance.

You can add one more thing to the list: speaking up for the LGBT community.

Rapinoe recently partnered with The Gay, Lesbian & Straight Education Network (GLSEN) to appear in a new video about name-calling.  The video coincided with the organization’s annual No Name-Calling Week, and Rapinoe’s involvement focuses on respect on the field.

Rapinoe’s involvement with the GLSEN campaign is another high-profile example of Rapinoe’s willingness to step into the spotlight on and off the field.  The video about name-calling fits into a larger GLSEN program called Changing the Game. The project’s focus is to develop a safe climate in K-12 schools’ athletic programs and physical education classes for all students, regardless of sexual orientation or gender identity/expression.

Rapinoe acknowledges the unique position she’s in right now in the video: “If I can stand on a platform and use the popularity that I have and the team has to make people more aware and to make this place more accepting for all people is something that I’m really, really proud to do.”

GLSEN Executive Director Eliza Byard was enthusiastic about Rapinoe’s participation in the video and wider campaign for the organization.  Byard noted first that Rapinoe’s coming out already made an impact.

“When someone like Megan Rapinoe steps up and comes out, it makes a huge difference,” Byard said.

“The world has changed dramatically,” Byard added during a discussion of the differences between the the cultural environment of today’s U.S. women’s national team and those of the late ’90s and early ’00s. She pointed to a huge shift in public opinion after GLSEN teamed with the NBA, not just with fans, but in athletes’ willingness to speak up for LGBT issues.

“Seeing Grant Hill every night in the playoffs was a game changer for us with athletes.” Byard says the shift became a landslide about two years ago, after the NBA campaign for Think B4 You Speak (another website currently featuring Rapinoe’s video). “There was an enormous sea change in the world of sports.”

Rapinoe isn’t the first female professional soccer player to appear in a video campaign for GLSEN. In August 2011, Joanna Lohman, then of the Philiadelphia Independence of the WPS, appeared in a brief video for Changing the Game.

In the video, Lohman states, “I wake up every day and I’m proud of who I am and who I am becoming. It’s never easy to be different and it doesn’t mean you’re wrong if you’re different.”

Byard hopes that GLSEN can expand it’s work in the arena of women’s soccer.

“Think of the players who show up on these teams,” she said. “These women are amazing in all kinds of ways. They’re crusaders for fairness, respect, and equality.”

It may be too early for the National Women’s Soccer League to form a partnership directly with an organization like GLSEN or GLAAD (The Gay & Lesbian Alliance Against Defamation). The primary focus of the league’s front office and executive director Cheryl Bailey will be the product on the field. Lohman says focusing on on a large campaign in 2013 would be considered “a distraction from their core goals” for the NWSL.

That isn’t to say that teams or players couldn’t partner directly. Lohman thinks “individual players or teams would have more resources to participate and more interest in doing so.”

“Soccer is the world’s game,” she said. “We could support people in the most desperate conditions if we can connect to international players in the U.S.” Byard is hoping to work behind-the-scenes this year to connect with international players via the NWSL and international friendlies and tournaments. GLSEN would then give them the support and resources they need to bring back to their home countries.

But Lohman knows the work is only just beginning. “We are all working towards the same goal and, more importantly, working together to build a movement.”