SEATTLE — Starfire Stadium in Tukwila, Wash., could be home to two high-profile women’s soccer teams this summer. Seattle Reign FC announced on Wednesday that it would play its home games at Starfire, where the Seattle Sounders Women played in recent years. 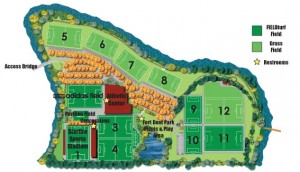 Map of the Starfire Sports complex, with the stadium in the bottom left-hand corner and Seattle Sounders FC training facilities on the right-hand side. (Photo: StarfireSports.com)

In addition, Reign FC announced its season ticket prices for 11 league matches and two friendlies at its home venue. Prices range from $195 (bleacher seats) to $286 (midfield covered grandstand) and will be sold exclusively on its website.

Starfire is about 12 miles from downtown Seattle. Seattle Sounders FC plays its U.S. Open Cup matches in the stadium and has its training facilities in the back section of the field complex.

The Sounders Women are expected to be back at Starfire for the 2013 USL W-League season, although no official announcement has been made. Starfire Director of Business Development and Tournaments Teddy Mitalas rejoined the Sounders Women staff as director of community relations in October after serving as head coach in previous years.