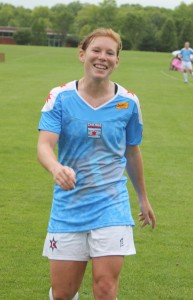 Lori Chalupny is one of the top free agents on the market for NWSL teams.

The National Women’s Soccer League appears determined to make stocking rosters as difficult and convoluted as possible. The current process is free agency although it is not clear when teams will actually begin signing players officially. Whenever that is they will grab four each before moving on to a supplemental draft and discovery period.

Following is our 13-for-13 list, a look at 13 free agents of note for the 2013 season. We have not included Leslie Osborne on the list. She has already made it clear that she’ll play in Chicago. The same goes for Allie Long who is heading to Portland. Sinead Farrelly is also headed to FC Kansas City.

Brittany Bock: Versatile veteran of the 1st round of the very first WPS college draft Bock spent some time with foot issues but is healthy and ready to go. Her ability to play all over the field should make her a sought after commodity by multiple teams.

Jen Buczkowski: Underrated defensive minded player helped save Sky BlueFC’s season in 2009 when she stepped in to play central defense in the playoffs. Later went to Philadelphia and Chicago where she excelled as a defensive mid. Red Stars midfield looks booked so look for Buczkowski to move on again.

Lori Chalupny: Midfielder with exquisite ball skills and a tireless work rate was one of the top handful of players in WPSL Elite last summer when she played for the Chicago Red Stars. One-time national team regular would be an asset to any midfield.

Becky Edwards: A vital part of WPS champions during both seasons in the league, Edwards is heading home from Sweden to play in NWSL. The D-mid slots are filling up quickly, but there is one open in Western New York where Edwards spent the 2011 season.

Tina Ellertson: The unsung soccer mom, Ellertson is now 30 and looking for a team in need of a solid central defender. She long ago played for the Sounders Women near where she was born.

Val Henderson: With Alyssa Naeher in Germany, Henderson is the top goalkeeper available. The Breakers and Flash stand out as needing keepers having been allocated the less experienced Mexicans.

Nikki Krzysik: Unheralded at the outset of WPS she turned herself into an excellent defender and captained the New York Fury in WPSL Elite last season. Solid if unspectacular center back.

Nikki Marshall: Solid defender who can occasionally get into the attack. Figures to be one of the prized back line players on the market.

Ella Masar: One of the great WPS success stories, Masar was one of the most improved players from the day the league kicked off to the end of the 2011 season. Went to France after that where she scored six times for Paris-St. Germain. Masar can score which will be a prime asset for NWSL teams. Back to Chicago?

Casey Nogueira: Creative whiz spent time in Dallas and Long Island last summer. Nogueira is often the most dangerous player on any field she sets foot on but too often struggles to stay relevant for long stretches.

Brittany Taylor: An outside back who got a brief look in the U.S. national team from Pia Sundhage, will also be a big pick-up for any team. Her versatility and ability to play pretty much anywhere on the field will be beneficial in a league rosters of only 20 players per team.

Cat Whitehill: Whitehill may not be the player she was in the mid 00s but is still solid in back and her free kicks for distance are remarkable. No one expects her to land anywhere besides Boston. Is she one of the new signings the club mentioned via Twitter?

McCall Zerboni: Tweeted that she has selected a team but has yet to make an announcement about which it will be. She was the best player on the Flash in WPSL Elite and was publicly grateful to the team for sticking by her after some trying personal issues cropped up. Was the Flash’s utility player and engine during 2011 WPS season. Expected to keep her strong ties to the Flash.

-The Breakers have signed two players and are set to reveal them in the coming days.

-Beverly Goebel-Yanez can be added to list of domestic players who won’t be participating in the inaugural NWSL season. The former Freedom and Flash player has signed to continue playing for INAC Kobe in Japan. Goebel-Yanez bagged 13 goals last season playing with former FIFA World Player of the Year, Homare Sawa.

-Other players reportedly heading to Kansas City are Melissa Henderson and Leigh Ann Robinson. Henderson spent 2012 with the Breakers following a standout career at Notre Dame. Robinson was a key cog in the Philadelphia Independence defenses.

–The Flash will be granted $24,000 that can be used on a single player above and beyond the salary cap. The money is compensation for being allocated one less player than the rest of the teams.

-The season will open Saturday, April 13. No other scheduling information has been made available.

-Manya Makoski, who played for the Los Angeles Sol in 2009, is looking to return from Finland and find a spot on an NWSL team. Makoski tore her ACL in training camp three years ago and did not play in WPS again.

-Other players who will not be playing in NWSL this season include: Yael Averbuch, Whitney Engen, Meghan Klingenberg, and Ali Riley.

-Lianne Sanderson is also said to be speaking to NWSL teams.

-Estelle Johnson is out there and talking to teams. She is an underrated outside back who would be an asset in most places.

-Highlights of Tom Sermanni’s first camp roster as U.S. national team coach include: the return of Ali Krieger one year after tearing her ACL and MCL in Olympic qualifying; the maiden call-ups for Hermann winner Crystal Dunn, U-20 captain Julie Johnson, and 17-year old goalkeeper Jane Campbell; and NWSL no. 3 overall pick Kristie Mewis. Of the 29 called in Sermanni will name 18 of them to face Scotland on February 9 and 13.