Sorting through the history of women’s league drafts 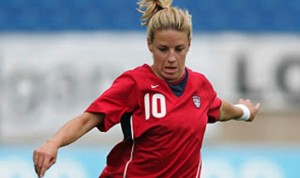 Sort through the list of players picked No. 1 overall out of the respective college drafts from WUSA and WPS and one name jumps out: Alex Morgan. The California product was taken by the Western New York Flash in 2011 and two years later she is the face of American soccer. At 23 her international soccer résumé is topped by few others.

But was Morgan the most effective player in her league as a No. 1 overall pick? She was certainly a key cog for the Flash, who won the championship in 2011, but Morgan had Marta and Christine Sinclair to lean on in Western New York. Had WPS continued she may well have been one of the top handful of players by now, but her one season of work is probably not the best among top choices.

Instead that honor goes to Danielle Slaton. The lead-up to the 2002 WUSA draft pitted Slaton, a defender from Santa Clara, and Florida forward Abby Wambach as the main players in line to be drafted first by the Carolina Courage. In the end they went with Slaton, leaving Wambach to a Washington Freedom team who had eyed her all along.

Slaton stepped right into the Courage back line and was a big reason why the team rose from the bottom of the league all the way to the top, finishing first and winning the Founders Cup. Slaton was named Defensive Player of the Year for the entire league, and in a touch of irony, Wambach walked away with Rookie of the Year honors. Unfortunately for Slaton a series of knee injuries hampered her career which was over by the middle of the decade.

A year later all of the focus for the draft was on another Santa Clara Bronco, midfielder Aly Wagner (above). The New York Power held the No. 1 pick in 2003, meaning Wagner would have to relocate to the other side of the country. Before it could happen the Power pulled off a surprising trade acquiring Shannon Boxx, Margaret Tietjen, and Sherrill Kester for two players and the right to swap the first pick with the second. That allowed the San Diego Spirit to select Wagner while the Power took Christie Welsh.

Wagner was by far the better player than Welsh, and the Spirit finished ahead of the Power in 2003, but the trade itself was favoring the Power for the one more season the league was around. Boxx blossomed into a star in her season on Long Island, Welsh was a serviceable forward, and Tietjen helped stabilize things in back.

WUSA launched with three different drafts. In the college supplemental draft the CyberRays held the first pick and used it on Kelly Lindsey. She was a rock in central defense in the team’s inaugural season championship, but knee issues stymied her after that.

In the main draft Sun Wen went first to the Atlanta Beat. On a global scale Sun was probably the most recognizable WUSA player after Mia Hamm, but injuries were a big part of her two seasons in the league. There had previously been an international draft when the league packaged players in pairs in an effort to make their transition to life in the United States easier. The Courage used the first pick on the tandem of goalkeeper Bente Nordby and midfielder Hege Riise. Nordby was a spectacular bust, unable to meld her aggressive style with her defenders. She was dealt to San Diego before the season was up. Riise however was brilliant, never more than in the Courage’s Founders Cup II win a season later.

Now UCLA’s Zakiya Bywaters enters her name into the No. 1 pick hat, and she knows that comes with high expectations.

“Yea I do feel a little bit of pressure, but I just try to focus on my game — my love and passion for the game,” Bywaters said. “That’s going to be greater than anything. As long as I am enjoying what I am doing I am going to always continue to just play my best. Just coming from the UCLA environment and the history we have at UCLA for women’s soccer, I think that’s helped prepare me a little bit. Mentally I’ll get to where I need to be, but right now I’m just trying to foster on the love and the passion that I have.”

Here is a look back at the top picks and some additional info from all three WUSA and WPS seasons.

International Draft – Bente Nordby and Hege Riise, Carolina Courage: This was a flawed mechanism, but the Norwegians were always considered the top pair on the board. DIAMOND IN THE ROUGH: Tough to pick one out of a single round draft but the Breakers took Maren Meinert and Bettina Weigmann sixth. Meinert became a fan favorite teaming up front with Dagny Mellgren and was voted WUSA MVP for 2003.

Inaugural Draft – Sun Wen, Atlanta Beat: The oft-injured star scored a spectacular goal in Founders Cup I but wound up missing a penalty in a tough loss to the Cyber Rays. REST OF 1ST ROUND – Liu Ailing (Philadelphia Charge); Fan Yunjie (San Diego Spirit); Gao Hong (New York Power); Dagny Mellgren (Boston Breakers); Wen LIrong (Carolina Tempest (became Courage); Anne Makinen (Washington Freedom); Thori Bryan (Bay Area CyberRays). DIAMOND IN THE ROUGH – Angela Hucles: The Breakers took Hucles at no. 93, and just more than a year later she made the first of what would be 109 appearances with the U.S. national team. Also considered were Kristin Luckenbill (no. 76) and Jen Tietjen (no. 83).

Supplemental Draft – Kelly Lindsey, Bay Area CyberRays: Lindsey was a tremendous center back who helped the Cyber Rays to a championship before injuries slowed her. REST OF 1ST ROUND – Jen Grubb (Washington Freedom); Staci Reynolds (Carolina Courage); Tina August (Boston Breakers); Katie Tracy (New York Power); Karissa Hampton (San Diego Spirit); Courtney Saunders (Philadelphia Charge); Maite Zabala (Atlanta Beat). DIAMOND IN THE ROUGH – Jaclyn Raveia: This one is a stretch ,but after being taken 14th by the Courage she went to New York and was a contributor to the Power in 2002 and 2003

College Draft – Aly Wagner, San Diego Spirit: After an average rookie season Wagner went on to have several solid seasons with the national team and surfaced for a season in WPS, helping the Los Angeles Sol to the best record in the league. REST OF 1ST ROUND – Christie Welsh (New York Power); Devvyn Hawkins (Boston Breakers); Hope Solo (Philadelphia Charge); Callie Withers (Atlanta Beat); Deliah Arrington (Philadelphia Charge); Mary McVeigh (Philadelphia Charge); Breanna Boyd (Carolina Courage). DIAMOND IN THE ROUGH – Jenni Branam: The Spirit grabbed Branam 17th and she saw some playing time on their playoff side. She hung around through WPS where her super-aggressive style helped Sky Blue win the championship in 2009.

International Draft – Formiga, FC Gold Pride – She spent one season with Gold Pride before heading to Chicago and was a bust for just more than the team not wanting to pay for Marta—which they wound up doing a year later. REST OF 1ST ROUND – Kelly Smith (Boston Breakers); Marta (Los Angeles Sol); Daniela (Saint Louis Athletics); Cristiane (Chicago Red Stars); Homare Sawa (Washington Freedom); Sarah Walsh (Sky Blue FC). DIAMOND IN THE ROUGH – Christine Sinclair: Lisa De Vanna was a contributor for the Freedom at No. 16, but four years later is it even believable that seven players in any draft could be selected ahead of Sinclair?

Draft (open to college players and others not taken in general draft) – Amy Rodriguez, Boston Breakers – the consensus best player available struggled through her first season, missing oodles of quality scoring changes and being publicly trashed by her coach Tony DiCicco. Went to Philadelphia in a trade and helped the Independence to a pair of finals appearances. REST OF 1ST ROUND – Megan Rapinoe (Chicago Red Stars); Christina DiMartino (FC Gold Pride); Yael Averbuch (Sky Blue FC); Brittany Bock (Los Angeles Sol); Kerri Hanks (Saint Louis Athletica); Allie Long (Washington Freedom). DIAMOND IN THE ROUGH – Jen Buczkowski: The 39th pick to Sky Blue was a reserve midfielder most of the season but when Anita Asante left to play in the Euros, Buczkowski took her place in central defense and the team didn’t miss a beat on the way to a championship.

College Draft – Alex Morgan, Western New York Flash – Morgan had a very strong rookie season and a year later became an American favorite thanks to one of the great years ever for a national team forward. REST OF 1ST ROUND – Sinead Farrelly (Philadelphia Independence); Meghan Klingenberg (magicJack); Christen Press (magicJack); Lauren Fowlkes (Philadelphia Independence); Keelin Winters (Boston Breakers); Kylie Wright (Atlanta Beat); Eli Reed (Western New York Flash). DIAMOND IN THE ROUGH – Meghan Lenczyk: Not much to go on here but Lenczyk scored the goal that gave the Beat their only win of the season after being taken 14th.