The Lowdown: Perspective on this allocation thing 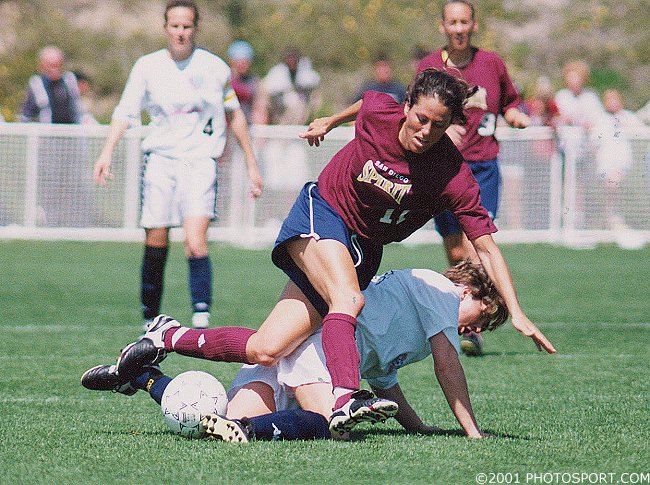 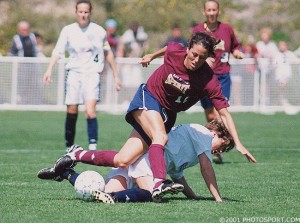 Julie Foudy was part of a stellar San Diego allocation, but the Spirit struggled in WUSA. (Photo: Photosport)

It’s a funny thing, this process they call allocation. It may be the most used word since the NWSL was announced late last year. It was certainly the buzz word last week when the lists were announced and the players assigned. But once the league plays out a few seasons, fans will be hard pressed to remember all but the best and most successful allocations.

This is the third time in 13 years that U.S. players have been divvied up between teams getting ready to launch a league. One player, Christie Rampone, has now been allocated three times (the first as Christie Pearce).

The buzz coming out of last Friday’s announcement was that Portland Thorns FC were the team to beat and needed only add a few spare parts to have a championship team. Veteran followers of pro soccer around here might remember the same was said about the 2001 San Diego Spirit who wound up on the bottom half of the table.

“I think that the allocation process is huge and it’s not something to be taken lightly,” said Abby Wambach who was allocated to the Washington Freedom in WPS and the Western New York Flash last week.

“Based on all of the skills of the players who were allocated that year do I think it made a difference? No. Do I think that it will make a difference for the first half of this season? Probably. But you never know what can happen and how two or three players can play together.”

Jim Gabarra was the coach of the Washington Freedom in 2001 and in 2009 and had the privilege of getting Mia Hamm and then Wambach as part of his allocations. Now with Sky Blue FC, Gabarra did not get anyone with similar star power this time but noted the difference with getting seven players instead of three.

“I think just like the league and the business model the process has evolved,” he said. “The allocations (this year) were certainly based on lessons learned off the previous allocations and certainly some other areas as well. The difference with this one is instead of getting allocated two or three players you’re getting seven. That’s a lot. It adds to the anxiety for coaches and GMs because that’s a huge chunk of your team that you don’t have complete control over.”

Here’s a trip down memory lane and a look at the allocated players from WUSA.

One of the most successful allocation trios, they all played key roles in helping the Beat to the playoffs all three seasons (no other WUSA team did that) and to the title game twice. Serlenga was one of five allocated players who was not a Founder but was one of the best defensive midfielders in WUSA.

The CyberRays faced immediate adversity when Venturini broke her arm less than a half hour into the inaugural game on a hard tackle by Lindsay Stoecker (who earned the league’s first yellow card for the play.) The CyberRays started 1-4-1. Buoyed by Chastain famously inviting David Letterman to the Founders Cup if the CyberRays were in it, they club rallied to the playoffs and won a thrilling final in which Chastain and Venturini both scored. Beane (a non-Founder) was named Goalkeeper of the Year, ran off a streak of 624 minutes without allowing a goal, and earned a look with the national team. In 2002 the team changed its name to San Jose CyberRays and missed the playoffs two years in a row.

Ducar was a disaster, replaced almost immediately as starting goalkeeper by Karina LeBlanc. Lilly and Sobrero were their usual steady selves but it did not help the Breakers reach the playoffs until the third season. Ironically it was two internationals, Germany’s Maren Meinert and Dagny Mellgren from Norway who found instant chemistry and played the game together as if they were from the same soccer brain.

Originally this was the Orlando Tempest and Michelle Akers was slated to be the team’s central figure while Overbeck took a year off after having a baby. When a late issue in Orlando forced the team to play in the Triangle, Akers retired and Overbeck decided to suit up. They finished last but rallied to win the championship in 2002 with all three allocated players in tow. Fotopoulos was one of the league’s best scorers before hurting her knee in 2003 and Roberts was a superb defensive midfielder.

Milbrett was an instant hit on Long Island scoring 16 goals and winning MVP during the inaugural season and leading the club into the playoffs. They fell on hard times in 2002 though. Milbrett did not score a single goal at home the entire season, Pearce struggled in the aftermath of ACL surgery and Whalen’s career ended when she hurt her knee during a game at Mitchel Field. They returned to respectability in 2003 under now national team coach Tom Sermanni but did not make the playoffs.

This was the most widely panned trio and it wound up playing out that way. Webber was not even the opening day starter in goal (Melissa Moore got the nod) and was traded to the Power after the season. Clemens (non-Founder) played reasonably well and was part of two playoff teams before being traded herself (to the CyberRays). Fair was her usual steady self but could do little to half the team’s downward plunge in the standings in 2003.

The crown jewel of allocations, and they even lived up to billing individually, particularly MacMillan who was a goal-scoring machine until hurting her knee in May 2003. (The injury ended MacMillan’s WUSA career but she made a remarkable recovery and made the World Cup team later that fall.) The team though, stumbled and bumbled through two disappointing seasons before reaching the playoffs in 2003 only to lose a heartbreaking playoff game to the Beat in sudden death extra time.

The only team to be allocated two non-Founders – French and Mullinix – the Freedom started slowly and wound up dealing French to the CyberRays after missing the playoffs in 2002. Hamm, who had minor surgery after 2001, gradually found her game in ’02 and eventually teamed with 2002 draft pick Abby Wambach to help the Freedom reach the title game in 2002 and again in 2003 where they brought home the trophy. Mullinix did not have a long shelf life as the national team keeper but she was solid in three seasons for the Freedom. Wambach wound up being allocated back to the club when they were part of the WPS launch in 2009.

– It would be nice to know the college draft order by now. Hopefully the order is set and the clubs at least have the information.

– Wambach said Monday that she did not want to go back East to play in WPS but did so out of loyalty to Freedom owner John Hendricks.