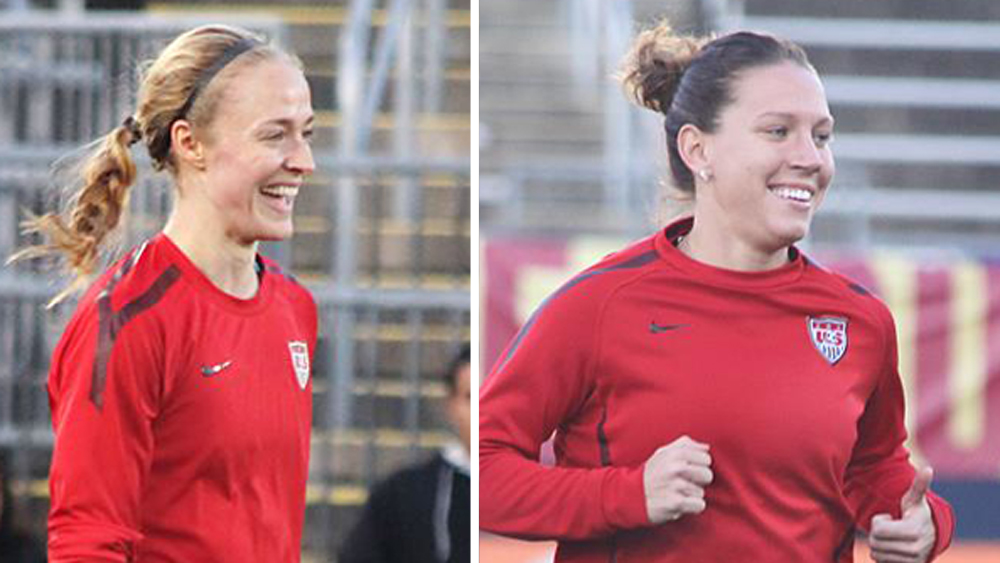 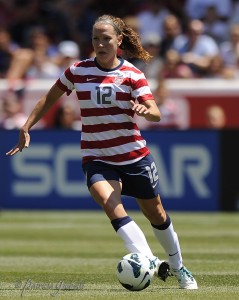 Lauren Cheney said she is excited to be back in the Midwest and playing for FC Kansas City. (Photo Copyright: Patti Giobetti | http://www.printroom.com/pro/psgiobetti)

“We did have a little bit of a say in where we wanted to go. Kansas City was one of my top three choices,” said Cheney, who is from Indianapolis. “I’m really excited to come back to the Midwest. I don’t think there are any better people in the world than people from the Midwest.”

Sauerbrunn, originally from St Louis, echoed those sentiments during an introductory conference call with FC Kansas City. “Having a team so close to home, for selfish reasons I am very excited. That’s (one of the reasons) it was my top pick.”

Cheney and Sauerbrunn, plus goalkeeper Nicole Barnhart, make a solid foundation for the Blues when they launch their club this spring. Also joining the club via allocation were Canadians Desiree Scott and Lauren Sesselman, plus Mexicans Renae Cuellar and Marylin Diaz.

“I have to say we were very happy with the allocations,” coach Vlatko Andonovski said. “The fact we got players that we ranked very high on our list just makes us very satisfied.”

FC Kansas City may not have been allocated mainstream names like Alex Morgan or Abby Wambach, but most observers (including me) have their group ranked just behind the Cascadia clubs. Barnhart is a solid keeper that comes with no baggage and a desire to supplant Hope Solo as the top choice keeper on the national team. Canadians Sesselman and Scott have tons of experience and Cuellar netted a dozen goals as a senior at Oklahoma last fall.

“The way I would describe her is she is a true goal scorer,” Andonovski said of Cuellar. “She has a bright future and is someone we’re very, very excited to have on the team because I think she will help us score some goals.”

Diaz might be the least known among all 55 allocated players. She is only 21 years old and is a recent addition to the national team in Mexico.

“Marilyn Diaz is a defender. She is very strong, a good sized defender,” Andonovski said.

Of Sesselman and Scott, Cheney said they have been impact players during recent U.S.-Canada matches and it will be interesting to “see how we mesh as teammates.”

The gem among the seven may be Barnhart. She was the WPS Goalkeeper of the Year in 2010 with a 0.77 goals against average. Reserved by nature, Barnhart lets her playing do most of her talking.

“Even though she is not the starting goalkeeper on the national team I think a lot of coaches will agree that she is top five in the world,” Andonovski said.

Kansas City was the most surprising of the eight markets when NWSL announced them in November. Questions mounted when Andonovski was named head coach despite limited visibility at the top of the women’s game. The allocation process helped debunk any suggestions that the city or the coach would be a hold up.

“I was excited at the prospect of having new coaches,” Sauerbrunn said. “I’ve played for a lot of coaches that are in NWSL so I’m kind of excited for new blood and a new approach on soccer.”

“I agree with Becky,” Cheney chimed in. “When I had never heard of the coaching staff it was more exciting to me. Kansas City has always been a good area for soccer and well known for soccer so I’m what they can produce.”

Andonovski said the team was aware that Kansas City was getting panned as an undesirable spot for allocated players.

“We were aware of that and we definitely put that in consideration, but there was nothing we could do except hope that some of the players would say they wanted to play for Kansas City. At the end of the day that’s what happened.”

NOTES: FC Kansas City has taken more than 500 refundable deposits for season tickets……The club hopes to have an announcement on a home venue in the next two weeks.