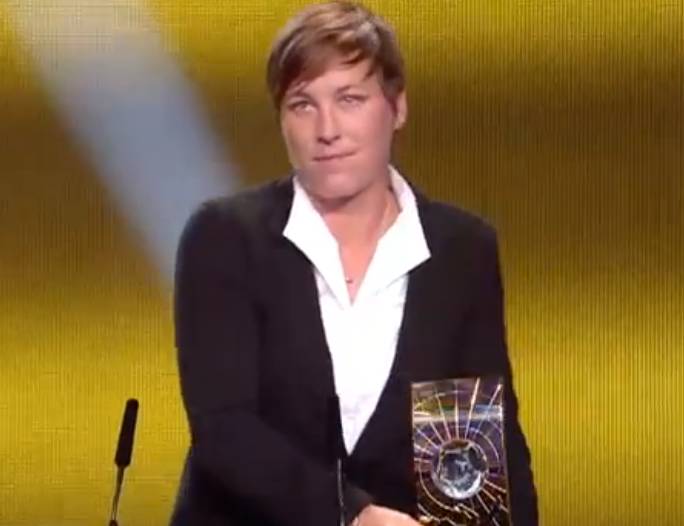 For the first time in over a decade, an American won the FIFA Women’s Player of the Year. Abby Wambach took the award over fellow nominees Alex Morgan and Marta, becoming the first American since Mia Hamm in 2002 to win it.

“They told me to prepare a speech, but I really didn’t expect this,” Wambach said as she got up on stage.

American goalkeeper Hope Solo joined FIFA president Sepp Blatter in presenting the 2012 Women’s Player of the Year Award. She ended up presenting it to one of her own teammates.

“I really didn’t expect this. Thanks to FIFA and President Blatter for having us. Pia (Sundhage), coaching staff and the medical staff as well, thank you,” Wambach said. “Most importantly, winning any individual award is a total product of the team that you play for. I’ve never scored a goal without receiving a pass from somebody else. Thanks to all the fans out there who continue to inspire me and the rest of the team to win as many games as we can.”

Wambach acknowledged her co-nominees, especially Morgan, her strike partner with whom she shares the goalscoring burden on the U.S. team.

“It’s almost as if when you score, I need to score, and when I score, you need to score,” Wambach said. “It makes us a better team.”

In 2012, Wambach closed in on Hamm’s national team goalscoring record, which stands at 158 goals. Wambach is on 152 goals as of today.

In addition to Wambach winning the women’s Ballon d’Or, former U.S. women’s coach Pia Sundhage won the Women’s Coach of the Year Award. In typical Sundhage fashion, she sang during her acceptance speech (“If Not For You” by Olivia Newton John), which drew on-camera laughs from Wambach and Morgan.

Full analysis and discussion to follow on The Equalizer later today.