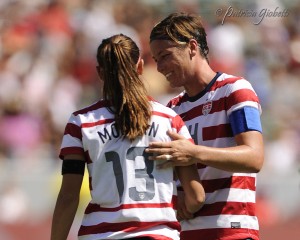 Like that taunting clock at the front of the room for high school students taking their SAT exam, the seconds hand ticks louder as each second passes. There’s just enough time to get through that section of the test, but you may have to skip a few questions.

The clock is atop a tower — like Big Ben’s presence over parliament in London — for the National Women’s Soccer League. The first step to teams filling out roster for the league’s inaugural season, which is set to begin in approximately three months, is allocating the national team players from United States (up to 24), Canada (up to 16) and Mexico (at least 12).

But with the NWSL College Draft less than two weeks away, national team players still don’t know where they will play and teams don’t have that critical piece of their roster to build (and market) off of.

And so the clock keeps ticking.

Sources around the league have slightly different takes on how far along the process is, but two things are consistent: It still isn’t done and the statement that sounds more like hope is that the process will be completed before the draft on Jan. 18 in Indianapolis.

That feet have collectively dragged on this shouldn’t come as a surprise.

As we noted on This Week in Women’s Soccer a couple weeks ago, U.S. women’s national team players have publicly been very guarded about their stance on the league. They have collectively hesitated to commit to playing in the league, which likely serves as the bargaining chip of strength in numbers for ongoing negotiations with U.S. Soccer.

U.S. midfielder Megan Rapinoe stated it best following that 4-1 win over China on Dec. 15 when she said, “we need to know a lot more.” That was the night the NWSL announced its name, which apparently wasn’t delivered to players ahead of time. Rapinoe led off postgame questioning by asking the name of the league.

Rapinoe, according to recent reports, will play for Lyon this spring before returning to the NWSL mid-season.

Sydney Leroux’s statement after that Dec. 15 match probably best summarizes the U.S. team’s ‘if they meet our demands than we’ll be excited’ view of the league.

“I think if it works out we’re all excited and we’re all for it, but we still don’t know all of the details so we are trying to figure that out.” – Leroux

Leroux had previously stated she would play in the league, but, of course, there are contracts and a Collective Bargaining Agreement to be worked out. Again, strength in numbers.

How much longer this process will take is unknown. It has to be done before the draft and it should have been done weeks ago, but the process surely has not gone as smoothly as the U.S. Soccer Federation and NWSL teams would have liked.

To jump to any conclusions about major U.S. stars not playing in the league would be yellow journalism at its finest. But it’s more than worth noting that negotiations have taken far longer than expected.

Canada seems to have its 16 allocated players selected, even if coach John Herdman won’t tell who they are. Mexico’s selected players remain unknown.

In fairness to U.S. players, they dealt with enough shenanigans during the WPS years and they’ve accomplished enough in the last 18 months to demand higher standards out of a domestic league.

“Quality of training staff, quality of coaching staff, compensation — small things that really affect whether a person can live off of playing professional soccer,” Alex Morgan said on Dec. 15, referencing what remains unanswered.

With all team coaches now identified, there’s clearly one big holdup: money. Whether or not U.S. Soccer will pay enough remains to be seen, but the pressure is on the federation and, in turn, the league. If the players don’t get that, European and perhaps even Asian teams are suitable homes for the American women.

Dec. 20 episode of This Week in Women’s Soccer: