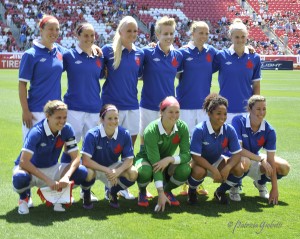 John Herdman declared that Canada would not rest on their laurels in the new year and his roster for the Yongchuan Cup in China is reflective of that philosophy. The second-year coach called in a young roster, the start of what everyone in Canada hopes will be a lengthy process that culminates with a sterling performance at the 2015 World Cup, which they will host.

“Some of these players I’ve been working with for nine months and I know them inside out,” Herdman said of his veterans. “Now there’s a whole roster of new players that we’ve got to get to know. Some players will be left at home and they’re aware of that and comfortable with that because it’s what the team needs.”

To that end, only 12 of the 21 players on the roster own bronze medals from last summer’s Olympic odyssey. One of the 12, Christine Sinclair, is suspended and cannot play in the matches against China (January 12), South Korea (January 14), and Norway (January 16.)

“I really didn’t have an option, she wanted to come,” Herdman said of Sinclair, who was suspended by FIFA for her conduct following the Olympic semifinal loss to the United States. “She doesn’t want to miss what we’re going to cover over there as well as she asked to be there. She is our captain and our leader. And it’s to influence these young players. This will be with some the only contact she will have these young players.”

Sinclair’s partner in crime at the Olympics, Melissa Tancredi, is another veteran who will not travel to China. The 31-year old Tancredi is at Chiropractic school but was in training camp with Canada last month.

“Melissa is still committed to the program,” Herdman stressed. “But she asked if she could put school first and I think that’s the right thing for Melissa to do. Throughout the year we’ll sporadically bring Melissa in and we’ll monitor her progress. She still wants to be a big part of this team for 2015 and beyond.”

It sounds as if Sinclair would be playing if she was eligible and her absence gives other players a chance to step in and try to score goals against quality competition.

“The reality is it does give some players opportunity to get some game time,” Herdman said. On whether her suspension is a blessing in disguise because the team defers to her too much the coach added, “I’m not sure we need to wean the team off Christine because Christine is always going to be a major part of this team. There are some players who probably haven’t had consistent opportunities to show themselves because Christine is on the team. There’s about three players where you look at it and say they really have a chance to shine.”

That group plus fellow 16-year old Kadeisha Buchanan are part of a young crop of players that will be looking to integrate themselves into the team as Herdman tries to build a team that can control more matches through possession.

“As Canada we’re physically strong and we’re dominant physically. We counterattack with precision. We showed that at the Olympics,” Herdman said. “The final piece of the jigsaw puzzle for us will be the control aspect. This tournament will be the start of trying to shift the mindset and encouraging the players to move in a certain direction without recrimination.”

“It’s an important time when we have to really take a step back. We can’t think about winning, we have to think of certain processes now. We’ve identified a number of statistical measures going into this tournament that are going to help us towards this new DNA.

Of course winning is still a factor. A full squad would probably be favorites to win the tournament, but this incarnation of Herdman’s roster will be scratching and clawing for everything they get.

“Certainly for this tournament there will be some non-negotiables for this team,” Herdman said. “They’ll be the things that make us Canadian – the spirit, the passion, the discipline, and the hard-working. They’ll be our absolute non-negotiables. And players, whether they’re young or old, will commit to those things.”

Herdman said he has spoken to the veterans that were left off the roster and that they are alright with his decision to take a young team to China. He added that some of the players not selected are part of the 16 players the CSA will subsidize in NWSL for its inaugural season.

“There’s a couple of players from the 16 that aren’t in the roster. There’s a rationale behind it that it has been made quite clear that over this next six months this is going to be an exploratory phase with the team.”

About the only question Herdman failed to produce a good answer for was when those 16 subsidized players would be allocated to their NWSL teams.

“It’s going to be in January sometime,” he said. “The new league has got things under control. They’re moving things along quite nicely. But in terms of specific dates I’m yet to receive any yet.”