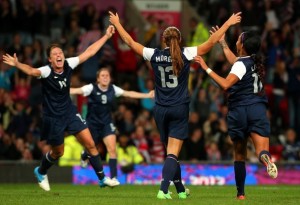 When Alex Morgan headed home the latest goal ever scored in a women’s FIFA competition she not only added a brick to her rapidly growing legacy, she decided one of the classic games ever played in women’s soccer and the sport as a whole. The Olympic semifinal between the United States and Canada contains all the elements of a classic sporting event. It was an important match played between border rivals in an iconic arena that included a transcendent individual performance, three comebacks, a controversial penalty, and a dramatic finish.

The U.S.-Canada series has not always been competitive enough to create a rivalry based on anything besides the 5,500 miles of border that separates the countries. But on August 6, 2012, at famed Old Trafford in Manchester, England, the mood was as chippy as it was dramatic, never more so than the moment Melissa Tancredi stepped on Carli Loyd’s face while the U.S. midfielder lay on the ground in the 55th minute.

Tancredi got away with her transgression, but that was hardly the most talked about refereeing decision on the evening. Canada led 3-2 in the 77th minute when goalkeeper Erin McLeod was dubiously called for holding the ball too long. The U.S. was awarded an indirect free kick from inside McLeod’s area. The Canadians appeared to have cleared the ball but a penalty was called after Megan Rapinoe’s drive glanced off Marie-Eve Nault’s hand. Abby Wambach converted the penalty bringing the U.S. from behind for the third time.

The impetus for the Americans playing from arrears all game long was Christine Sinclair. The 29-year old striker was born to score goals, having done it at every level up to and including the international stage. Never before though, had Sinclair played so splendidly in such an important contest. She broke early U.S. momentum with a goal on 22 minutes courtesy of sublime footwork and finishing in close.

When Rapinoe’s corner sneaked through Lauren Sesselman’s legs for an equalizer in the 54th minute, it looked like the U.S. had seized momentum they would carry to the gold medal match. Sinclair was far from done, though. Taking a pass from Tancredi—who by the 67th minute should have been sent off for the Lloyd incident—Sinclair redirected it with her head past Hope Solo for a 2-1 lead. Rapinoe came to the rescue again three minutes later, settling a ball in the top corner of the penalty area and cracking it in off the far post with a perfectly struck shot that goes down as one of the best Olympic goals scored in the men’s or women’s tournament.

Canada’s 2-1 lead had lasted all of three minutes but so too did any safe haven for the United States. In the 73rd minute, Sinclair got on the end of a corner and completed the hat trick with another header that left Solo helpless. However, the match turned out from that point. Christine Sinclair had sewn up one of the great individual efforts ever put forth in a global women’s soccer tournament.

Four minutes later the sequence began that saw the U.S. get a third equalizer inside of 26 minutes. The world waited for the U.S. to break their northern neighbors and find a game-winner but it proved elusive. The Canadians were hanging with the Americans not only with impressive soccer but through a fierce will to win that never faded. When Wambach missed a sitter late in regulation and found the crossbar late in extra time it was looking like it may not be the U.S.’ day.

Penalty kicks loomed when, three minutes into stoppage time of the second extra time, Heather O’Reilly lifted the cross into the area that Morgan finished by poking it too high for McLeod to reach but just under the crossbar for the 4-3 U.S. victory.

The United States eventually won the gold medal. Canada returned three days later in Coventry and won the bronze on a goal deep into regulation stoppage time by Diana Matheson.

The bronze medal and epic semifinal brought a heroine’s welcome for Sinclair and her mates upon their return to Canadian soil. A year earlier they had crashed out of the World Cup having scored a single goal against seven conceded in consecutive losses to Germany, France, and Nigeria. Their coach, Carolina Morace, left Germany pleading for ways to find new female soccer players in Canada.

This time, under the direction of John Herdman, the Canadians played world-class football and Sinclair became one of the country’s most beloved athletes practically overnight. The Olympics ignited a women’s soccer flame in Canada that has a chance to burn through the 2015 World Cup that they will host. And though they did not win gold, the 2012 Olympic team will forever be linked with the U.S. for enthralling the world with two of the most invigorating hours of soccer most of us have ever seen.