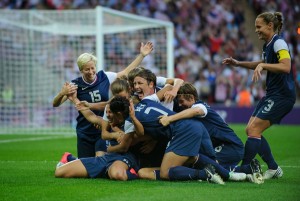 The United States women’s national soccer team is something of a walking cliché. It’s a never-say-die team, filled with that intangible American spirit that means the team can never be counted out of any game, no matter the deficit. And in 2012, there was the added angle of redemption following a bitter loss in the final of the 2011 World Cup.

Sounds kind of cheesy, doesn’t it?

It would get old, but the world’s No. 1 team keeps finding ways to twist the plot, despite everyone knowing what is coming.

The word “redemption” was being tossed around the U.S. media and the team itself with obnoxious frequency. Yet when the redemption finally came — in the tune of a 2-1 Olympic gold medal match with over Japan, which had beaten the Americans in the World Cup final a year earlier — the story had the genuineness of being written on the spot.

The epic 4-3 semifinal win over Canada will go down as one of the best games ever, but the wind would have really been taken out of the sails had the U.S. gone on to lose the final three days later (like the World Cup, which they lost after an epic quarterfinal win over Brazil).

The result was as important for what it wasn’t as what it was. More than any other soccer team in this country, the U.S. women’s popularity is tied to the place they hold in mainstream culture, and that mainstream culture was disproportionately incredulous when the inspirational 2011 team lost a heartbreaker to Japan in the World Cup final. To replicate that result in London would have tested the patience of an audience as skeptical of their heroines as they are their soccer.

And that’s the key thing to know about the U.S. women’s 2012 season. London wasn’t just about a gold medal. It solidified their place as the country’s most important soccer team — the highest profile women’s team in the world, one of the few sets of female athletes that have the profiles to be icons.

Carli Lloyd’s early header ensured the U.S. wouldn’t need their typical theatrics. Her second half screamer brought on the surreal. Japan applied considerable pressure, hitting the bar, forcing incredible saves out of Hope Solo and ultimately getting one goal back, through Yuki Ogimi’s 63rd minute strike.

Maybe there was too much at stake to risk the drama. Had the U.S. lost to Japan, the transient fans who’ve defined the team’s popularity would have left them. Instead, they’ll be there at the 2015 Canada World Cup.