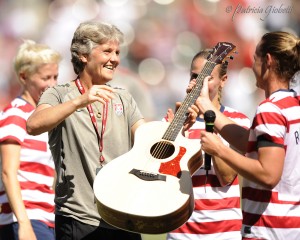 Soon to be ex-USA coach Pia Sundhage gets a send-off present from the team. (Copyright Patricia Giobetti | http://www.printroom.com/pro/psgiobetti)

Looking at Pia Sundhage’s record as coach of the U.S. national team, it is easy to forget the delicate situation she inherited in 2007. The former Swedish striker famously sang to her team on their first meeting together. It was a group that needed some soothing sounds to get back on track.

Sundhage was hired November 13, 2007, just 47 days after the most famous display of breaking ranks in the history of the team when Hope Solo called out Sundhage’s predecessor, Greg Ryan, for benching her in the World Cup semifinal (a 4-0 loss to Brazil). The aftermath was surreal. Solo was ordered to stay away from the team instead of attend the third place match against Norway. Solo’s time with the national team was in jeopardy, and the close-knit, ‘I will have two fillings’ era of team camaraderie was also at risk.

With little time ahead of the Olympics in 2008, Sundhage made an early decision that would shape her five hears at the helm. She asked the core members to move forward from what happened in 2007 – with Solo as their goalkeeper. However they felt about it individually at the time, the decision to bring Solo back to the fold paid dividends in the gold medal match when she was the clear difference against a Brazil side that was probably better on the day.

Sundhage would take the U.S. to the 2011 World Cup, where they wrote a remarkable story by avoiding a quarterfinal defeat at the very last moment only to suffer the cruelest of losses to Japan in the final. And then they were back at the Olympics this past summer where they survived an epic semifinal against Canada before avenging their loss to Japan to win gold again.

Although Sundhage has been criticized for not expanding the player pool enough, one of her strengths was creating a feeling among those who were there, that any one of them could make the difference in a given match. It was that mentality that helped the team win gold in ’08, even after Abby Wambach broke her leg in the team’s final warmup match before heading to Greece.

Sundhage also continued to deal with drama surrounding Solo. When the keeper wrote a controversial book Sundhage approached her and asked that she wait until the Olympics were over to release it rather than open up the entire tournament as a question and answer platform about it. Solo complied and was once again in goal for a gold medal victory.

This fall Sundhage decided she was ready to go home to Sweden. She informed U.S. Soccer that she was stepping down. That day she was named to the same position in Sweden, where the European Championships are scheduled to be played next summer.

Sundhage finished her tenure as U.S. coach 91-6-10, pulled the team safely from the rough seas that followed the 2007 World Cup, and bridged a path of success onto her replacement, Tom Sermanni.

Next up, moment No. 6: WPS folds, W-League and WPSL Elite