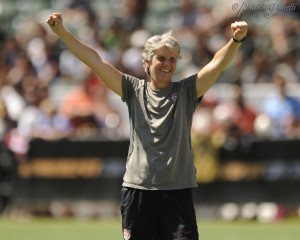 The wait to see Pia Sundhage’s first game against the team she used to manage won’t be long. Sweden, which Sundhage was named head coach of in September, will face the United States at the 2013 Algarve Cup on March 11, according to the website Soccerway.

In just under five years with the United States women’s national team, Sundhage guided the team to the 2008 and 2012 Olympic gold medals, as well as the silver medal at the 2011 World Cup.

Abby Wambach has 152 goals and could conceivably tie or break Mia Hamm’s all-time international record of 158 international goals. The U.S. women play Scotland twice in February prior to the Algarve Cup. And if Wambach reaches the record in Portugal, we should actually be able to see it Stateside. Al Bann Media is set to broadcast U.S. women’s games at the Algarve Cup.