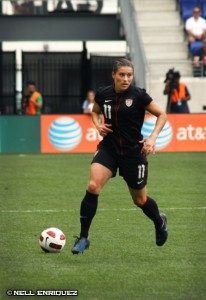 UPDATE: Ali Krieger told the Washington Post‘s Steve Goff that she plans to play in the National Women’s Soccer League and that she wants to play for the Washington Spirit. Krieger went to Forest Park High School in Woodbridge, Va.

DEC. 16: It appears Ali Krieger’s time at 1. FFC Frankfurt may have come to an end. Krieger tweeted on Saturday about her memories with the team over the last five years, with the hashtag “newchapter.”

Hmmm, there’s a new chapter of women’s soccer beginning in the U.S. with the introduction of the new National Women’s Soccer League, and Krieger is tasked with working her way into the U.S. women’s national team picture all over again. Tom Sermanni is now the coach of the United States and he has talked up how great this current roster is. Krieger has missed nearly a year of national team action after tearing her right ACL and MCL in qualifying on Jan. 21.

Krieger was one of the best defenders at the 2011 World Cup and could be of use to a U.S. team still searching for answers at outside back. Kelley O’Hara has come along well at the left back position after converting from an attacking role, but Krieger’s flank play and defending would be a welcome sight on the right side for Sermanni and company. That is, assuming, that she is the Krieger of 2011, which remains to be seen following injury.

Clearly, her playing in the NWSL on home soil — where she can be noticed by Sermanni on a far more regular basis — would be beneficial to a national team return.

Last day in Germany…thank you to my team and my fans for all the support and great memories these past 5yrs! #newchapter #illmissyouall