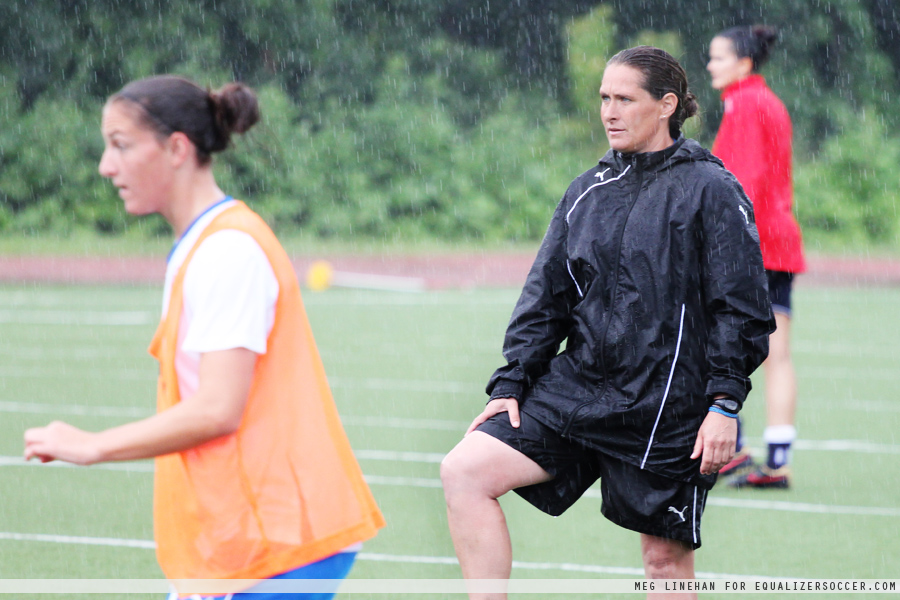 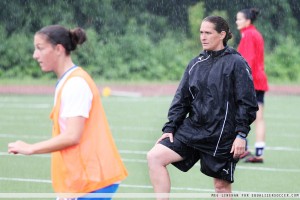 The Boston Breakers announced on Friday that Lisa Cole would be returning as head coach in 2013 for the inaugural season of the new women’s professional league.  After leading the team to their best regular season record in franchise history (11-3) in the WPSL Elite, Cole will oversee the Breakers in her first season as head coach in a truly pro league.

Earlier this summer, she expressed her thoughts on the need for a league in the States to continue the development of players on an international quality level of play.  Player development is still a top priority for Cole, and her efforts may pay off for the US in 2015.

Meg Linehan: Congrats on the news. The reaction has been very positive, although I think everyone had always assumed it was a bit of a foregone conclusion.

Lisa Cole: I know!  I was hoping that.  It was funny because people were asking, and I was like – yeah, of course I’m going to be back!  Isn’t that the perception?  I’ve been working here this whole time.  So it was funny.

ML: Things on the league itself are obviously still pretty tight-lipped, but with the next two U.S. women’s national team games being aired, will we see more come to light?

LC: There’s a meeting this week, so I think we’ll see a lot more information after that.

ML: In talking to Leslie Osborne the night of the conference call where we finally got all of these details, she said that she thought the Breakers and the Red Stars and the other existing teams have a slight advantage, just because they’re all coming off of a season already.  You’ve been playing, you already have a bit of a core team.  Do you think that’s still the case, considering all the attention that Portland and Seattle have been getting from the U.S. national team players?

LC: I think there’s some things that will give us an edge.  Familiarity with some of the players, the organization, myself.  At the end of the day, we don’t know who the players on our team will be.  That’s still to be determined.  Obviously, there’s a lot of great players that I want to have back, but we don’t know what’s happening with the national team yet.  We can’t do the whole “who do you build your team around” thing yet.  We do already have some pieces in place, while other teams are probably looking.  But until the national team players get allocated, it’s hard to say whether we’ll be ahead.

ML: Additionally, there’s still Canada and Mexico to figure out as well.  Wherever a player like Christine Sinclair ends up (if she plays in the league) will have a great advantage.

LC: And I think a lot of national team players want to be on the West Coast, unfortunately.  So I think of the teams on the East Coast, I think we’re definitely attractive.  But Seattle and Portland will have a little bit of an edge, just because that’s where people want to live their lives.

ML: Leslie also said that coaches are going to play a big role in attracting players, and I definitely agree with her.  A player knowing they’re going to a city with a high-caliber coach in place, like you or Aaran Lines.  That’s going to be a pretty big sell, knowing the system that gets run in Boston.

LC: [Laughs.]  I hope that that’s the case.  I think that players have had good and bad experiences in the WPS with the quality of the coaches that were at different organizations for sure.  I hope we’re able to attract good players because they know that the environment’s going to be professional, they know they’re going to get good coaching, they know they’re going to have access to good treatment, and all the things that they need to gain another level.  This is an interesting time for players.  These two years will play an important role in what happens with the World Cup squad, what happens with the Olympic squad.  I know for sure when I’m talking to players that I say we’re going to be committed to developing players so that they get to that next level.

ML: That was the unstated thread for that announcement conference call, that this new league is really the stepping stone to the next Women’s World Cup in Canada, and that North America can really dominate there.  Not just the U.S., but Canada and Mexico as well.  Is that in the back of your mind as you’re putting the pieces of the team together in the offseason?  Not just a successful season in Boston, but the successful development of players for the future of national teams?

LC: Yes, obviously I want to put together the best squad for Boston, but I’m also looking at players.  And a lot of these players you know, or Tony [diCicco] had them in the Under 20s, like the [Meghan] Klingenbergs and the [Keelin] Winters and [Christen] Press, that level of player who hasn’t quite gotten the opportunities that Alex Morgan got.  And Morgan’s taken hold of that, and is now a superstar.  There’s other players that are waiting for their turn.  Those are the players I’d like to be involved with.  It always helps to have the veterans.  We hope that maybe Heather [O’Reilly] will be coming back to our team, but we won’t know that until player allocation.  But we could get a couple good young players with their future still ahead of them, with their best soccer still to be played.  I would be proud to be involved with that, for sure.

ML: For the team itself, are there any needs that you’re hoping to address through a draft or player allocation?  Not to say that the level of play in the WPSL Elite was lacking, but this new league is going to have Alex Morgan, Abby Wambach, that level of player floating around out there.  Where do you need to step it up to compete with that?

LC: Based on the players that I’ve talked to, and the players that want to come back to Boston, the place that we still need to solve is keeper.  That was something we thought we had; three different goalkeeping high-quality players coming in last year, for whatever reason they ended up in other places.  [Alice] Binns did a great job for us in the interim.  But an international level goalkeeper.  We need to add some more players in the attacking mid position.  I think we have some talented young players there, but it would be nice to get some veteran leadership in that position.  And then, as always, you’re looking for a goal-scorer.  And then the pieces will start to fall into place.  Again, it’s hard to plan not knowing where the national team players are going.

ML: There are a lot of players out there floating around, players who have gone to Europe, players who have stayed in the U.S. in addition to the national team pool.  I think starting with eight teams, there will be a lot of depth to pick from, not to mention all the kids that are graduating from college this year.

LC: I agree, I think there are players that are going to be left out, to be honest.  With Canada and Mexico, and then trying to keep costs down, there might be some good players here that get left out.  That’s why we’re hoping to have a good reserve team, so that some players will have a chance to keep developing their game in the WPSL Elite.  They might not be ready for the next jump right away, but this way they’ll keep playing.

ML: Are there any other staffing changes in the coaching at the Breakers?  I don’t know what Kristine Lilly has planned for 2013 at this point.

LC: Lil and I are going to talk in the next month to get an idea of what her schedule looks like to see if we can get her back in some role or some capacity.  Andrew Quinn, our goalkeeping coach from last year, is willing to come back.  We just have to work out his time with Harvard and whether or not that makes the most sense.  I’ll be hiring somebody full time, because both Lil and Andrew will have their other stuff going on.  I’ll need somebody to be here day in and day out.  I have a couple of good people that I’m talking to, so that should get worked out in the next month.

ML: There’s been a lot of talk lately about what the league needs to do in terms of its audience.  The Breakers have been successful in building an engaged fan base.  The Breakers had the Riptide back in the WPS days.  Would you like to see something like that come back?

LC: It’s always great to have a supporters club.  And people who are passionate about the game and knowledgeable about the players, and who give me a hard time and keep me on my toes.  It would be great to have a more soccer educated fan.  We’ll always attract the kids, and they’ve got to be a part of it because we’re hopefully being good role models.  The players that are out there for the young people.  It would be nice to have fans that are going to travel.  We showed up in Western New York and there’s a group of Breakers fans there; we’ve had great fans that way.  That will definitely be something we’re looking to do.  Our fans have been fantastic, so we’re just looking to continue to grow at this point.