Ohai does it again, North Carolina advances to final 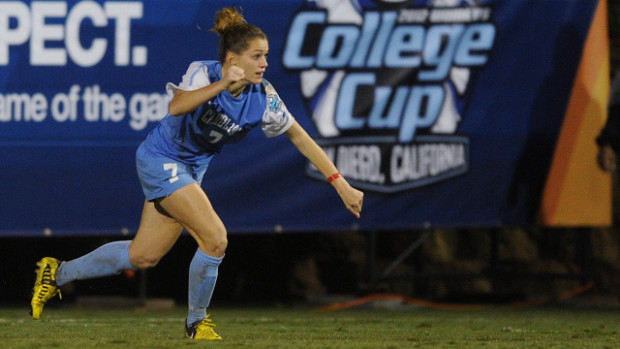 The North Carolina women’s soccer team is headed to the final match of the NCAA College Cup – again.

The Tar Heels, who have won 20 of the 30 women’s soccer tournament titles, knocked out the defending champions, No. 1 Stanford, with a golden goal by junior forward Kealia Ohai in the 105th minute of overtime for the 1-0 win in the semifinals match in San Diego on Friday night. North Carolina will play Penn Stat — which beat Florida State in overtime of the first semifinal — in Sunday’s championship.

“Right before the overtime started, Anson (Dorrance) looked at us and said someone has to make the big play, someone has to be courageous enough to step up and score this,”Ohai said. “So when I got that chance, that’s actually when I thought I have to score this – I have to make the big play. Crystal has been carrying us, and she still carries us throughout this whole NCAA tournament and it was time for someone else to put one away.”

Ohai is no stranger to big, game-winning goals. She scored the goal that lifted the United States U-20 women to a World Cup title in September.

UNC outshot Stanford 20-13, with Ohai taking a game-high five shots. Her game-winner hit the left post and bounced into the goal after Katie Bowen sent a pass through to Crystal Dunn, who ran into a couple of defenders and passed it off to Ohai .

“I think that was probably the best chance of the game, so to win the game on the game’s best chance is certainly a nice way to win,” said UNC head coach Anson Dorrance. “It wasn’t the ball bouncing around in the box or some sort of fluke -it was and engineered attack with a great final pass, a composed finish, and I think that’s just a tremendous way to win a soccer game.”

With rain falling on and off, and an extremely slick field, both teams were challenged, especially the goalkeepers.

Stanford’s goalkeeper Emily Oliver certainly did an outstanding job of keeping her team in the game, coming up with 10 saves in the game.

“I think our team had a great game,” Oliver said. “I was really proud on how everyone battled up to the end. I was trying to just do my part. That said, I think our backline was solid. Everyone left their heart out on the field tonight and I’m really proud of our team.”

Stanford’s offense was led by Sydney Payne, who took four shots in the game. Adelaide Gay made four saves between the pipes.

Stanford has 10 seniors and they have reached the College Cup every year that they have played, including last year’s championship. But, the Cardinal has never beat North Carolina and is now 0-9-3 against the Tar Heels.

“It was a disappointing end to a great year,” said Stanford head coach Paul Ratcliffe. “It’s always difficult to lose in overtime because you can’t make any changes or do anything to get back into the game because the game is over with one kick of the ball. Overall, I’m proud of the team – great year. Tough way to end.”

North Carolina will play Penn State in the final match on Sunday at 4 p.m. ET in San Diego.