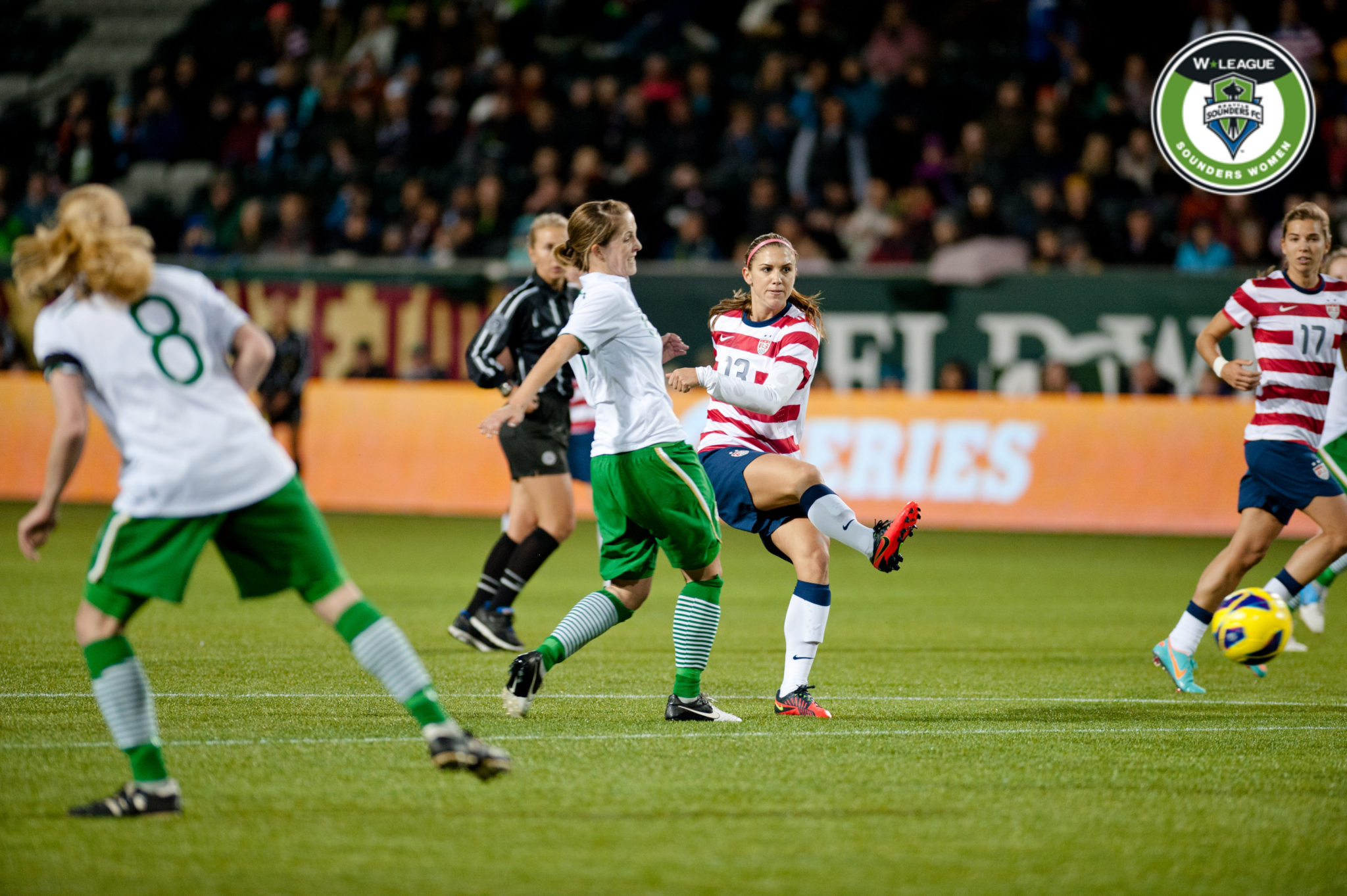 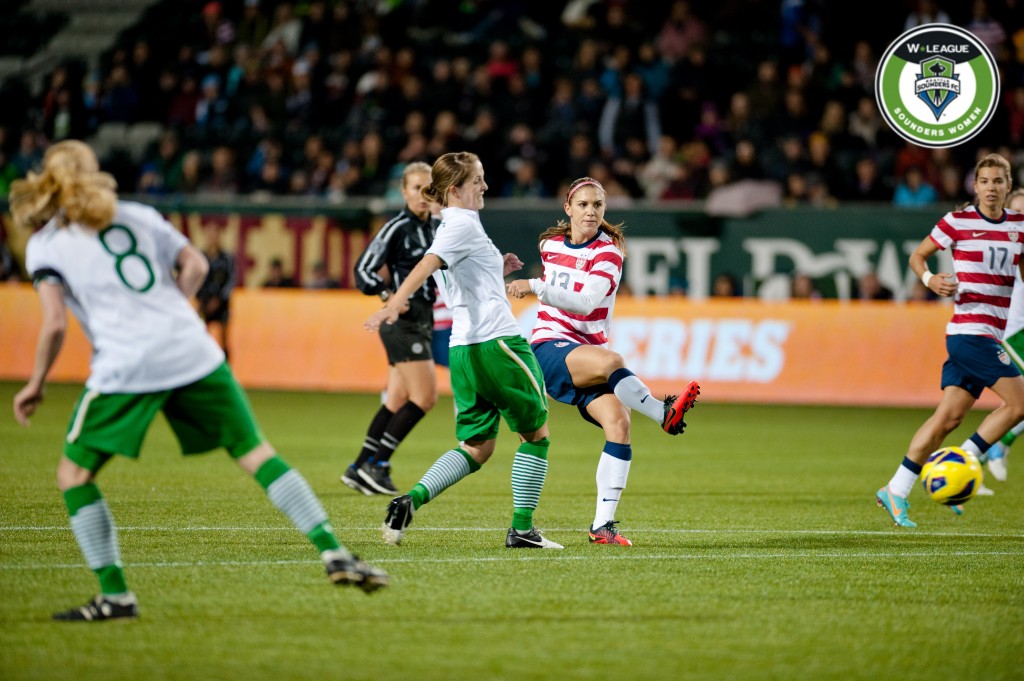 Alex Morgan scores her third goal of the night on the way to a 5-0 U.S. win over Ireland at Jeld-Wen Field. (Photo: Jane Gershovich/SoundersWomen.com)

PORTLAND, Ore. — Christmas came early for fans of the U.S. women’s national team on Wednesday, as they witnessed the Americans light up Ireland on the way to a dominant 5-0 win. The victory extended the U.S. all-time record over the Irish to 9-0, the last six of which have been shutouts, outscoring them 35-1 in the process.

It took a few minutes for the U.S. to start clicking. In the early going, the Americans missed some connections on the cold turf at Jeld-Wen Field.

“We decided to pick up the tempo a little bit (after the first 20 minutes) and decided to play with a bit more width, and now we started to create some chances,” interim U.S. coach Jill Ellis said after the game. “Overall, I thought the performance was good. Very good.”

Tobin Heath got free twice in quick succession down the left side, sending crosses into the Ireland penalty area. Her first service resulted in the first shot of the game, as Ireland goalkeeper and captain Emma Byrne parried Alex Morgan’s seventh-minute shot.

Byrne was the most-capped player on Ireland’s roster. Its starting lineup had a combined 351 caps, while the Americans boasted a combined 1,245 appearances and 274 goals.

The loudest cheers from the 10,092 in attendance came for Megan Rapinoe, who also received the warmest reception during lineup introductions. The former University of Portland star took on two players near the endline in the 15th minute, maneuvering past them only to be taken down.

“It’s good to be back in this city — no rain, beautiful weather, great crowd,” Rapinoe said. “I’d definitely like to end up here (in the new league). I have a place here now, and I love the city.”

Heath intercepted another pass down her side in the 20th minute, and on the next possession, she split Ireland’s defense with a through ball to Morgan. Her left-footed shot from close range forced Byrne into a foot save, poking the ball away with her toe.

Four minutes later, Morgan would find the back of the net.

Heather Mitts threw the ball in to her on the right side of the penalty area, and she dribbled across the defense on top of the box. Finding a small space between defenders, she hit a curling shot with her left foot that dinked off the left post and in to give the U.S. a lead it deserved.

It was Morgan’s 35th international goal and her 25th of the year, making her only the third player in U.S. history to score a quarter century in one calendar year. Wambach (2004) and Michelle Akers, who scored 39 goals in 1991, were the others.

She doubled her tally and the lead 10 minutes later, tapping in a pass from Lauren Cheney. Cheney received the ball with her back to the goal and a defender marking her closely, but she found space to turn and deliver the pass to Morgan.

Through individual action, Morgan would make her natural hat trick on the stroke of halftime. She had her first shot from 19 yards out blocked, but she converted on the second opportunity, putting it past Byrne for the third time in a span of 20 minutes.

“From the beginning of the game, Abby and all the players kept saying, ‘Just shoot. Shoot. It’s a slick surface,’” Morgan said. “So that’s what I tried to do, and it went our way.”

She nearly created a fourth U.S. goal at the start of the second half before being substituted. After an incisive run across the back line, she cut a ball back across the six-yard box that Heather O’Reilly nearly tapped in, but Byrne was quick to smother it.

“She’s special,” Ellis said of her star striker. “Every time she touched the ball today, something dangerous happened. To score a hat trick in 45 minutes is pretty impressive.”

The player who came on for Morgan, Sydney Leroux, did add a fourth goal in the 62nd minute. After O’Reilly diced up defenders on the right side, she crossed the ball to the top of the six-yard box for Leroux to head back across Byrne and into the near post.

Trying not to be outdone by her fellow striker, Leroux added a second for herself in the final 10 minutes. Amy Rodriguez put a through ball into the penalty area at a wide angle, and Leroux hit a hopeful shot that squeezed under Byrne and into the goal.

It was the only goal of the night on which the Irish goalkeeper could be faulted. From start to finish, it was a thoroughly dominant performance from the Americans, who outshot Ireland 20-3 (10-1 on target).

“It’s a bit of a weird period for us right now,” Rapinoe said. “We’ve had a lot of time off, and we’re kind of on-again, off-again with these games, but I think we came out and put a good show on.”

These two teams will meet again on Saturday in Phoenix, and the U.S. rounds out its Fan Tribute Tour with three matches against China, Dec. 8 in Detroit, Mich., Dec. 12 in Houston and Dec. 15 in Boca Raton, Fla.