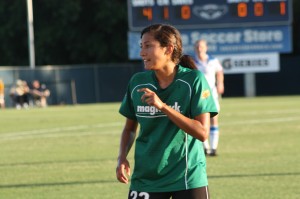 Five of the eight UEFA Women’s Champions League quarterfinalists were determined on Wednesday. Arsenal, Göteborg, Malmö, Lyon and Røa are all through to the next round.

Kelly Smith exploded for a hat trick to lead the Arsenal Ladies over German side Potsdam in the marquee match-up of the Round of 16. Smith scored 27th, 34th and 57th minutes to give Arsenal a 4-3 win on Wednesday and a 6-4 aggregate win. American goalkeeper Alyssa Naeher was the victim of that hat trick and American Keelin Winters scored in the 55th minute for Potsdam.

U.S. forward Christen Press scored twice for Göteborg to lift her team to a 3-2 win on the day and a 4-3 aggregate victory over Fortuna. American Cami Levin played the full 90 minutes, while U.S. midfielder Yael Averbuch was replaced by fellow countrywoman Ingrid Wells at halftime. Americans Tiffany Weimer and Casey Ramirez were on the losing end with Fortuna.

Lyon only beat Zorkiy 2-0 on Wednesday but it was enough for an 11-0 aggregate victory.