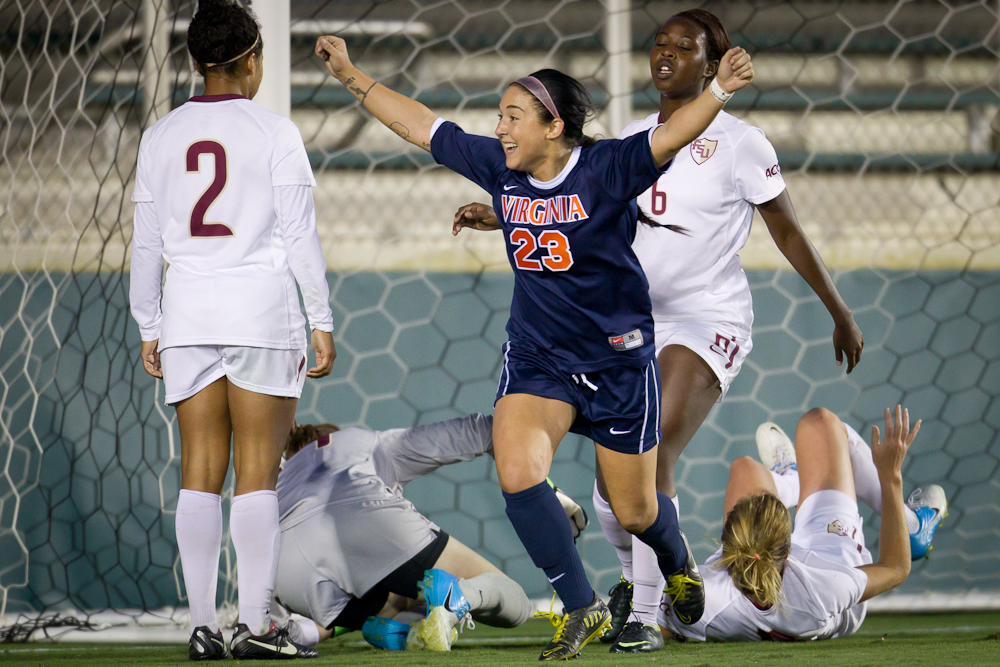 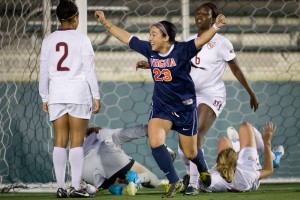 CARY, N.C. — The first semi-final of the ACC Championship Tournament between No. 7 Virginia and No. 5 Florida State was exactly the offensive slug-fest no one expected.

The goals started less than five minutes into the game as Virginia jumped out to an early 1-0 lead when Caroline Miller received the ball around the top of the 18-yard box off a cutback from forward Gloria Douglas. The newly-anointed ACC Offensive Player of the Year slalomed through a crowd of defenders before finding enough daylight to stroke a high, precise shot just inside the post past 2011 tournament MVP Kelsey Wys.

Douglas, who played in place of freshman sensation Makenzy Doniak, was lively down the flanks most of the night, receiving several deep balls and keeping Florida State’s normally adventurous outside backs pinned to their defensive third.

Five minutes after the first goal, the Cavaliers added another when midfielder Erica Hollenberg played a clever diagonal ball through the heart of the Seminoles’ surprisingly porous defense to find Morgan Brian, who got behind the defense, took the ball wide to the left of goal and fired to the opposite corner past a helpless Wys.

Two goals up in under 10 minutes, the start for Virginia was especially shocking considering No. 1 seed Florida State had only given up seven goals all season while keeping clean sheets in half of their 18 games.

Virginia coach Steve Swanson credited the surprising outburst to adjustments the team made after their first game against FSU, a 1-0 overtime loss two weeks ago.

“I think we did a good job putting a little more pressure on their back line than we did the first game,” Swanson said of their modified strategy. “It was a close game… but we didn’t generate as many chances as we should have or could have. After that game… we kind of looked at things as a staff and just thought maybe if we tweaked things a little bit, we could get a bit more numbers around the ball in the midfield and we might be able to penetrate with our front-runners.”

Less than two minutes later, though, a Florida State corner kick put the reins on the Cavaliers’ offense when the UVA defense failed to clear a ball sent in off a corner kick. It eventually fell to Tiffany McCarty in front of goal and she passed left to a criminally-unmarked Dagny Brynjarsdottir for an easy goal. 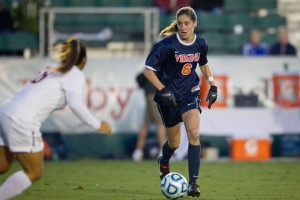 Morgan Brian led the Cavaliers' offense over the Seminoles with two goals and an assist on Friday night. (Photo Copyright: Steve Bruno for EqualizerSoccer.com)

The scoring abated until the second half, when a majestic 63rd minute cross from Florida State outside back Casey Short connected with McCarty in the center of the box. FSU’s leading scorer rose to head the ball toward the opposite corner past goalkeeper Danielle DeLisle, who seemed to have a hand on it, but merely inconvenienced the ball’s journey to the back of the net.

“Florida State’s the kind of team that [isn’t] going to quit,” Swanson said about his opponents’ comeback. “We could’ve dropped it there when it was 2-2, but I thought they responded really well.”

Having relinquished an early two-goal lead, the Cavaliers’ offense refused to give up and hit the throttle, with midfield boss Brian in the driver’s seat.

Virginia re-established their lead in the 69th minute when a cross from Douglas spanned the width of the 18-yard box to find Brian. The midfielder aggressively drove around her defender toward the endline before cutting back to Hollenberg, who fired on goal from point-blank range.

Less than two minutes later, Douglas looked to be in behind the defense again when Short brought the forward to the ground about 25 yards from goal. The foul set up a free kick for Julia Roberts, who connected with Brian on the near side of the goal. Brian sent a glancing header across the face of goal for her second of the night and gave UVA a 4-2 lead.

With five points in the game, Brian had a career night against a dominant Florida State team and her assist on the third goal was her fourth in as many games. Miller’s early strike, her 15th goal of the season, continues a sensational senior year. She moved to fifth place on the UVA charts for goals in a single season, while her 34 points ties her output from 2011, also ranking her fifth all-time in a season.

The Seminoles’ exit means, once again, the ACC will not have a repeat champion in the tournament. North Carolina is the only team to have ever done so. The loss also continues the Garnet-and-Gold’s late season skid which has seen the previously unbeaten team lose three of their last four games.

For Swanson and Virginia, it will be an opportunity to win only their second ACC Tournament as they advance to face Maryland in the final on Sunday. When the two teams met in September, the Terrapins handed Virginia a 3-1 loss in Maryland, their first in conference play.