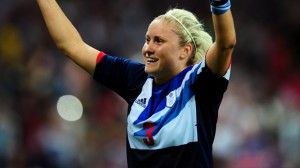 Steph Houghton got snubbed from the Ballon d'Or ballot, but no surprises there. (Photo Courtesy: thefa.com)

Quick, name some of the best soccer players in the world.

Done? Odds are that few, if any, on that list are defenders. That is the ongoing fate that these players of forgotten positions face around the world.

Soccer has progressed rapidly over the last two decades in particular. The game is faster than ever and coverage of the sport continues to increase. Media and fans alike love the flashy step-overs and the jaw-dropping goals. Those sell tickets and TV contracts.

Looking at the other side of the equation, however, should make defending that much more impressive. Every shutout should be that much more appreciated when one considers what it takes to defend such potent attacks.

But who are we kidding? It isn’t.

The appreciation and recognition of defending in modern sports (yes, it’s an issue across all sports) has been absolutely lost. And I don’t ever recall it even existing in my lifetime. Thursday brought that semi-annual reminder with the announcement of the FIFA Ballon d’Or (world player of the year) shortlist. Ten players are up for the award: One goalkeeper and nine attacking players (midfielders and forwards).

Japanese defender Saki Kumagai’s omission from this list is yet again a snub. The argument for her is the same as it was last year:  She’s a key element to the most organized team in the world.

New to the scene, however, is England’s (and for the Olympics, Great Britain’s) Steph Houghton, the most entertaining women’s outside back in the world right now. She should be on this year’s short list, plain and simple.

It’s a wonder that Houghton did not get any more attention because she isn’t just and out-and-out defender; she is an outside back who gets forward and buries free kicks into the back of the net. It’s impossible to not enjoy watching her play.

Houghton just hit another stellar free kick in a 2-2 draw with France on Saturday. (I really don’t approve of pirated video, but this one is worth seeing – at the 3:00 minute mark).

World, meet your Roberto Carlos of women’s soccer – an attack-minded, dead ball specialist left back who plays all over the field (Arsenal lists her as a midfielder). Carlos also hit a spectacular (and more impressive) free kick against France back in the day.

If Houghton can’t make the Ballon d’Or shortlist for being a defender who had an utterly brilliant offensive Olympic performance, defenders may never win the world player of the year award. She scored in each of Great Britain’s three Olympic group stage victories, including the game-winner in the opener against New Zealand.

We’ll see if Houghton’s success continues, but her year of brilliance will clearly go unrecognized by FIFA.