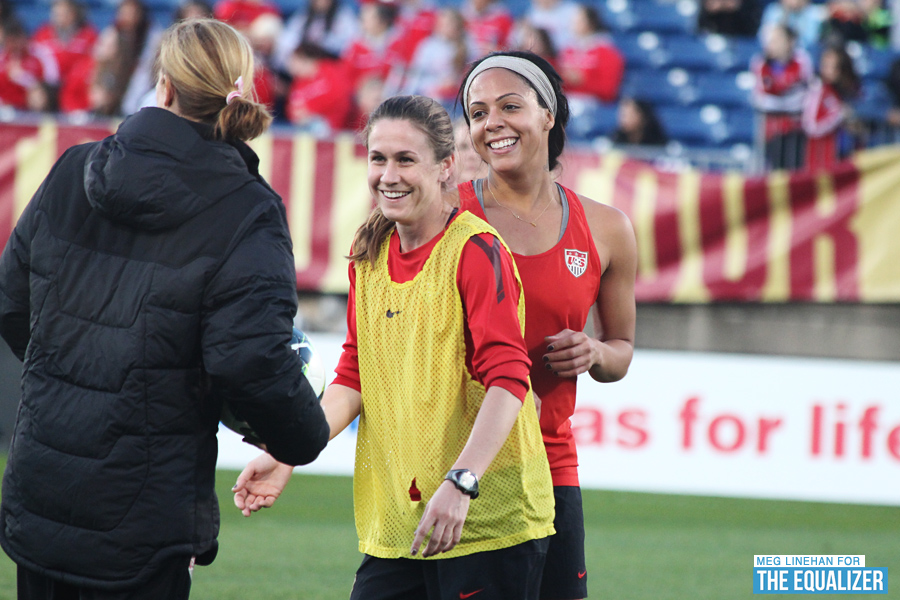 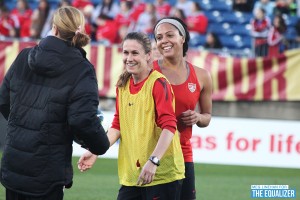 The U.S. women’s national team will face Germany for the second time in four days on Tuesday at Rentschler Stadium in East Hartford, Conn.  The team held an open practice for fans and media on Monday at the field on a brisk October New England evening.  As the goalkeepers went through drills, the rest of the players ran through some small-field scrimmages and shooting exercises for a little over an hour.  The team looked focused but relaxed, and spent considerable time signing merchandise for the fans.

While Germany might have been off of some American fans’ radars, despite their No. 2 ranking internationally, the players certainly weren’t planning to miss these two chances to size up a team they haven’t played since May of 2010.

Sydney Leroux was quick to point out that “the Germans have a lot to prove.  They lost the World Cup at home, they didn’t go to the Olympics.”  The combination of the gold medal win and the number one FIFA ranking simply makes the US the biggest target for every other team to want to beat.  Leroux summed it up fairly simply: “Everybody wants to be the champions.”

On tomorrow night’s game, Leroux acknowledged there was some tweaking in the works.

“I think we all know what we need to do,” she said. “We haven’t been together recently like everyone else has, so just playing that first game gets us back into the feel how it’s supposed to be, so hopefully we can put things together a bit better.”

The gap between matches didn’t faze Heather O’Reilly, who spoke about the chance to go home and get back to basics.

“Between the last game and the Germany matches, everybody on the team had their time to pick up their training, get a little bit sharper, get a little bit fitter,” she said. “We knew these Germany games were going to be a battle.  We were excited for some big games.”

The common theme amongst the players certainly was excitement to get a second chance against Germany.  O’Reilly noted that the games had a bit more weight to them than the other recent matches played on the Victory Tour.

“We don’t get to play very many matches against Germany, so even though they’re friendly matches, I think they’re very meaningful matches.”

As Jeff Kassouf noted in his talking points for Saturday’s match, the second half looked considerably different from the first half.  O’Reilly was a large turning point in the momentum in Saturday’s game, and she found that “we learned some things as the game went along.”  The travel day to Connecticut on Sunday and Monday’s practice meant the team had yet to watch the footage from Saturday’s match.  While specific adjustments haven’t been discussed, O’Reilly knew what the theme would be.

“For us, it’s all about that balance of the direct and indirect game, and still playing possession,” she said. “It’s always a blend, and it’s always about finding the right moment to go forward.”

As for Kelley O’Hara, her sights were firmly set on a win on Tuesday night.

“We need a little bit of redemption after Saturday.  No one wants a tie.”

The game will be covered on NBC Sports Network at 7:30 p.m. EST, live from Rentschler Stadium in East Hartford.