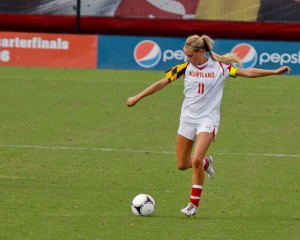 Olivia Wagner scored a late brace to lead Maryland over Virginia 3-1 Thursday.  After trailing 1-0 for over a half an hour, Maryland scored three goals in the span of 14 minutes to seal the victory.

Virginia outshot Maryland 15-9 in the game and had more dangerous scoring opportunities. Maryland won the game, however, on two well executed free kicks.

Kaili Torres gave Virginia a 1-0 advantage with four minutes remaining in the first half. The score came from a scrum in the box that Maryland could not clear. It took a couple of attempts but Maryland’s defense finally succumbed to the pressure. Danielle Colaprico was accredited with the assist.

For about the first 30 minutes of the second half, both sides traded some chances but neither could find the back of the net.  Possession was near evenly divided between the two sides, although Maryland struggled at times to maintain possession in the midfield.

In the 74th minute however, Maryland found the equalizer off a free kick. Wagner’s free kick was knocked into goal by a Virginia defender. The free kick was awarded to the Terrapins after Alexis Prior-Brown was tripped by Julia Roberts. Roberts was given a yellow card.

After the match Maryland head coach Jonathan Morgan admitted that the Terrapins got a little bit lucky on the equalizing goal. Maryland may have been lucky in more ways than one on Thursday as lightning started streaking across the field about five minutes after game’s conclusion. If the bad weather had started a bit sooner, the game might have been called before Maryland equalized.

About ten minutes after the equalizer, Wagner added another off a free kick after Virginia was called for a handball. The foul was committed about 25 yards from goal. Wagner bent the ball into the upper left beyond the reach of Virginia’s Danielle DeLisle.

Two minutes later Danielle Hubka added an insurance goal.  Kaplan was in Virginia’s box and passed it to Hubka who was on her left. Hubka then took the open shot, which found the back of the net. Hayley Brock was also credited with an assist.

Following the match, Morgan stressed on the importance of the team’s successful road trip against Duke and Wake Forest .

“I can tell them all day how good they are,” he said, “but that really made them believe, ‘ok, we’re a good team.’”

Although the Terrapins believe they can beat the best teams, Wagner feels that the team is sometimes underrated but she prefers it that way.

“I like it that way because we go in as underdogs every single game and I think people kind of underestimate us,” she said. “They look at our freshman and sophomores on the field and think they’re inexperienced but we’ve come together so well as a team.”

If Maryland beats Virginia Tech on the Sunday, it may be difficult to continue billing them as underdogs. Maryland is currently 8-2-2 and in first place in the ACC standings.

With tonight’s loss Virginia falls to 8-2-2. Virginia’s next match will be Sunday at home against Duke.