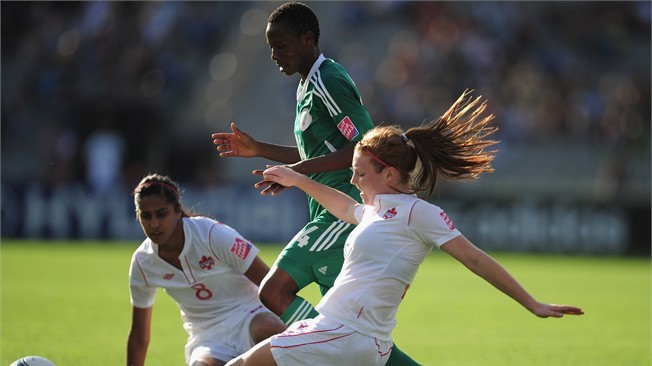 The United States U-17 women held tough against France to earn a 0-0 draw despite being out-shot 23-3 on the opening day of the World Cup in Azerbaijan. Canada also settled for a draw, losing a lead late to Nigeria to tie 1-1.

France dominated much of the match against the U.S. and was unlucky not to breakthrough for a game-winner. U.S. goalkeeper Jane Campbell was called upon several times in the second half and made a series of critical saves late in the match to preserve the shutout for the United States. The match wasn’t pretty for the U.S., but a point is a point.

“I think getting a point against one of the favorites is not a bad result,” U.S. head coach Albertin Montoya told FIFA.com. “I didn’t think we played well. It was our first game, and we were a bit nervous going into it. We played against a team that plays very well, that can make their way to the final. So we got a good results against them.”

Both teams now sit on one point in Group B, two points behind North Korea, which dismantled Gambia 11-0 earlier in the day.

Canada and Nigeria also had to split the points in their Group A opener with a 1-1 draw. Nigeria was the better side throughout the match but was denied by the woodwork on two clear-cut occasions in the first half.

Amandine Pierre-Louis gave Canada the improbable lead in the 63rd minute, but Chinwendu Ihezuo equalized for Nigeria on a nice volley in the 81st minute to salvage the draw.

Colombia beat host Azerbaijan handily in Group A, winning 4-0. The result, however, was less important for the host nation than the big picture: a U-17 women’s team and a tournament on home soil. As U.S. captain Morgan Andrews pointed out in her pre-tournament blog, this is the first Women’s World Cup held in a predominantly Muslim country.

Oh, and Azerbaijan sure is taking this tournament seriously. The opening ceremony drew almost 30,000 fans and included a musical performance from J-Lo. Good crowds continued to show up for the matches on Day 1, too.