Morgan Andrews Blog: Speedos in Cyprus ahead of U-17 Women’s World Cup 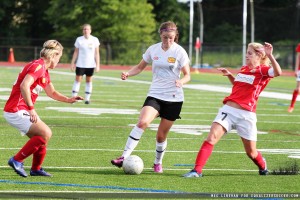 We’re finally at the World Cup. Can you believe it? We stopped in Paphos, Cyprus, eight days ago for a short training camp before making our way to Azerbaijan. It was a good place to train and break up the trip. We stood out just a tad, seeing how our hotel was kind of a couple’s retreat area. Imagine twenty-one loud 17-year-old girls on your honeymoon trip? However, it’s not like we spent too much time in the pool or anything. This is not spring break! We only needed it for leg recovery sessions. We weren’t allowed to touch the floating candles.

Anyway, we are a very respectable group, who likes long walks on the beach which was right outside our hotel. Not many people from my hometown get to say they went from Hampton Beach in New Hampshire to the Mediterranean off of Cyprus. The view was beautiful and the sun set every night around 7:05 p.m. The endless strips of orange and pink fading into the darkness set up the perfect backdrop for our pictures with the American flag.

I had a few questions for the people of the resort, though. Why are you at the pool right now when the beach is literally 10 steps away?!? Second, why are there so many speedos? I’m sorry, but unless you are Michael Phelps or Ryan Lochte, you cannot pull off the speedo! What’s our next challenge? Exporting as many board-shorts as possible to Europe.  Don’t worry, my eyes have recovered, and training is going well!

The first thing that people think about American soccer is that we are fit and strong. That’s true, but our team has deeper levels of skill. The mix of our strikers’ quick but cheeky moves often leaves defenders confused. Our midfield’s passing makes our teammate’s next touch as easy as possible for them and our defensive third is beyond organized and tougher than brick to break through. Every day we work as hard as our bodies will possibly let us and every day we push a little bit more. After all, a tired body today makes for a stronger body tomorrow, right?

After adjusting to the time and the heat in Cyprus, we left the Mediterranean Sea for the Caspian Sea. We were welcomed to Baku – the capital city of Azerbaijan – by our World Cup mascot and flowers! Sorry boys, the girl in the 6-foot-4-inch soccer costume beat you to giving me my first flower bouquet.

Even though Cyprus was a boat-load of fun, we decided to spread the love and bring our loud, spirited team to Azerbaijan. Our hotel is unique and we currently live in these little cottages. Right across from my room is a two-story high bridge that looks over the Caspian Sea. I know talking about all of these ocean views is killing my parents. I prefer a cabin near the mountains, but if you were to ask my mom there would be nothing better than a small cottage on the beach with a wrap-around porch. Oh, and NO snow. She’s simple like that. That’s why I promised to put my first paycheck towards that house. Of-course their “Plan A” wouldn’t work and they wouldn’t be able to move away while I’m at college and not tell either of my brothers or me. For now though, that is just a dream. Where I am right now, at the U-17 Women’s World Cup, is an actual reality!

We were told today that the tickets for our first game against France this Saturday were sold out. That’s 12,000 people… at OUR game. I guess you could say that’s a little more exciting than the couple of friends at my high school games or the ten parents at my club games. One of the girls at practice today asked our head coach, Albertin Montoya, if he had ever played in front of 12,000 people. He grinned and let out a chuckle. Of course he has. He told us that we won’t even hear them. He said “when we step on the field it’s about us. When you’re in the game you don’t hear the crowd around you. You hear your teammates and you hear the ref.” Even though it’s hard to believe, as a team, we trust our coach and believe in what he says. None of us have ever played in front of a crowd that big before but then again we hope this team will be making even more history. We are playing in the first Women’s World Cup ever held in a predominantly Muslim country, which is a great achievement for women’s soccer world-wide. Trust me, we won’t stop there. Our goal is to do something that no other U.S U-17 Women’s Team has ever done before and that is to win. Our goals on the field are the highest, as is our dedication to our board-short movement!

Morgan Andrews is the captain of the U-17 U.S. women’s national team, which begins its World Cup campaign in Azerbaijan on Saturday at 6 a.m. ET against France.