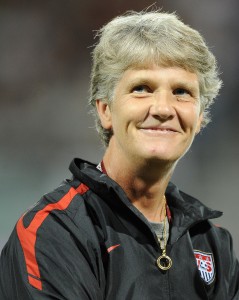 Pia Sundhage will not continue as the head coach of the U.S. women’s soccer team and will pursue other options back home in Sweden, U.S. Soccer announced on Saturday. The Swedish FA has announced Sundhage will take over as coach on Dec. 1 after Thomas Dennerby recently announced he would step down. Sundhage said on Friday she misses home in Sweden.

“After the Olympics we had discussions and early in the process it became clear that Pia was very interested in returning home to Sweden,” said U.S. Soccer President Sunil Gulati. “It certainly wasn’t an easy decision for U.S. Soccer or Pia. She deserves a tremendous amount of credit for the amazing success the U.S. Women’s National Team had during the past five years. On behalf of U.S. Soccer, we sincerely appreciate Pia’s hard work, dedication and commitment to the organization. We wish her all the best in the future.”

Sundhage had the following to say in a statement:

“It was an honor to be able to coach these players for five years and I learned a tremendous amount from them,” said Sundhage. “I want to thank all the players and all of my assistant coaches for making me better. Before I took this job, I always admired the spirit and character of the U.S. team, but to experience that first-hand on the training field and from the bench as their coach was truly special and something I will treasure for the rest of my life. Although it is time to move on, I’d like to thank U.S. Soccer for this wonderful opportunity and I wish this team and the players all the best in the future.”

Check out my thoughts on Sundhage’s legacy here at Sports Illustrated.

Who will lead the U.S. women next? Someone invested in integrating the youth system more with the senior national team, ideally. More at Goal.com.

The U.S. defeated Costa Rica 8-0 on Saturday to open the Fan Tribute Tour. Sundhage will finish her tenure as coach in the next two U.S. games against Australia on Sept. 16 and 19.