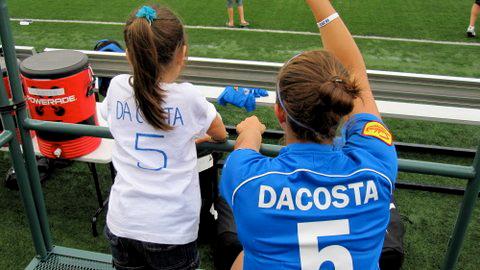 Amanda DaCosta is enjoying life outside the lines, including coaching.

2012 kicked off with a bang (kicked off, get it??). Things started off in Tampa, Fla. with the first U.S. U-23 national team camp of the year, moved across the world to Japan with Sky Blue FC, and then straight into preseason with the Boston Breakers. With U-23 camps scattered throughout the WPS Elite season, and one international trip to Norway with the team, I was already tired and it’s not even 2013 yet!

At the end of my season with the Breakers, I faced a bit of an injury that put me out of commission for the last pair of games of the regular season. I managed to get on the field for the semifinal game vs. the Chicago Red Stars where I scored my first goal of the season (maybe I should get hurt more often? Just kidding…) but we unfortunately fell to the Red Stars 3-1. Instead of heading back to our cozy hotel beds in Rochester, we would drive through the night back to Boston on our charter bus and clear out our lockers. Our season had ended abruptly, and my teammates and I would go off in different directions for the off-season. I was faced with a decision at this point. Did I want to play overseas until next season or should I find something else to do? Still nursing that nagging injury from the weeks prior, I decided it was in my best interest to take the fall to focus on rehabbing and working on my individual game.

To be honest, there is no off-season when you are expecting to start up playing again. Whenever you are away from the team it is your responsibility to make yourself better until the new season takes form. A complete rejuvenation from head to toe! Literally.

My mind – the struggle to stay disciplined and get the proper treatment and recovery I need so that I can start training again.

My heart – keeping in shape, whether it’s running fitness or cross training.

My body – hitting the gym, working on my overall strength, staying healthy.

Life Outside the Lines:

One of my greatest interests has always been sharing my passion for soccer with those around me, particularly younger players. This fall I’ve taken on a number of coaching jobs with Tallahassee United Futbol Club (TUFC) and Cornerstone Middle School. I’ll also be working with Florida State University in an outreach skills program dubbed ‘Project 4.0” and doing the color commentary with ESPN3 for the Seminoles soccer team. I get exhausted just typing it all out. I’ve decided to take on a pretty busy schedule, but I hate being bored so I’ll be fine, right? I mean, playing is easy for me. When I step on the field there is clear direction of my role and what I am expected to do, and as always there is some room for me to be creative as well. I’ve been coaching and training younger players for years now but I’ve never been responsible for my own team.

Now I have three. Yikes. Three huge puzzles with a million tiny pieces just sitting there waiting for me to try and piece them together. And not the nice puzzles with big cartoon characters on it so it’s obvious where the pieces go. I’m talking about the annoyingly difficult puzzles of the ocean where every single piece is blue. All of these young girls (and some boys too) were now looking up to me to teach them my secrets and further their knowledge and love for this beautiful game.

Needless to say, I’m in for a bit of a challenge. A different perspective is never a bad thing. When you’re on the field, everything is all in one plane for you to see and you can try to solve the problems as they appear: but you can’t see everything. I am a huge advocate of being a student of the game – talking about soccer, practicing on your own, and most importantly watching soccer until you’re red in the face!

Sitting on the sidelines at my first pair of games over the weekend, I saw it all. I took notes and played with my lineup, moved some girls around and explained to them what they were good at and why I was doing what I was doing. The whole thing felt like it was coming together, and it was exciting to see the girls be successful. It made me think of what it was like to play when I was their age: reckless abandon. I loved it and I still do!

Walking around on game day with my teammates thinking we were so cool with our matching warm up tops and travel bags all lined up under our team tent. Playing nine games back-to-back-to-back-to-back and not getting tired. Whatever happened to being able to do that!? My point is that I love this new perspective. After being so submerged in this soccer life of coaching I feel like more of a soccer junkie than ever, and trust me that is saying A LOT. I’ve been thinking lately of how much I miss playing even though it has barely been a month since our season ended. Sometimes I wake up and wish I had gone overseas for the season so I could still be playing. Then I remind myself that everything happens for a reason, and I wouldn’t change where I am for a second. I am shocked, however, at how much I am learning from being on the other side of things! And I’m semi-shocked at how badly I want to run out on the field while my girls are playing and take control of the midfield…or steal the ball from the other team when they get close to my sideline. 🙂

At the moment, I am almost back to full recovery and have been cross training like crazy to keep in shape. I’ve taken on rock climbing as my newest challenge (my monkey arms and I have found our calling) and bike riding (my dog is struggling with this one) along with other random activities, but I love every second of this crazy life of mine and I wouldn’t change it. I am beyond excited to get back to playing in the U.S. again next season, and believe me when I tell you that I will be prepared. I feel such a thirst for the game right now and I’m not sure if I’ve ever been more self-motivated.

Life outside the lines is treating me pretty well right now. I enjoy a fresh perspective and a new take on life. It keeps me on my toes. It keeps me wanting more.