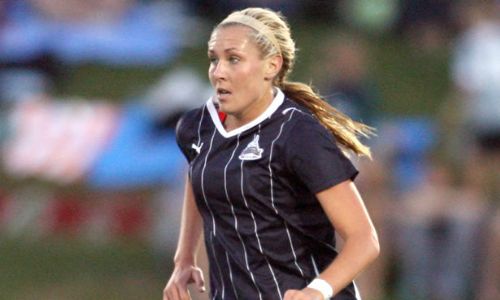 The women’s soccer world is holding its collective breath waiting for details on the latest attempt at a pro league in the U.S. and that includes players. Midfielder Allie Long is among those biding their time, hoping for the best.

“I’m really excited that (a pro league) is coming back,” the 25-year-old Long said.  “It’s hard to find a contract that would just sign me for five months.  So I will not be going back to France, even though I had a good experience.”

Last winter, Long was lucky enough to get a contract with Paris-St. Germain (PSG) that allowed her to leave in time to return for WPS training camp.  She wound up staying an extra month after the WPS season was cancelled, but her focus this winter will be on getting ready to play in the new league, whatever that is and wherever it takes her.

To say details of the new league are scratchy is an understatement; and if Long — certain to be a sought-after player — knows any more than we do, she is not letting on.

“I’m just so thankful that there is a league,” she said. “I’m so happy and excited, and all the other details will come as the time passes.”

When the details come, the Long Island native will continue to set her sights on someday playing for the U.S. national team.  She was called into camp once, two years ago, but never got a chance to show her best stuff.

“That’s a goal for me,” she said.  “I got into camp a year before the World Cup and I actually got hurt the first day.  I was immature.  I hurt my MCL and I should have just stopped.  It’s been a goal for me ever since.  It would be a dream to me to be able to play for my country one day.”

Paul Riley coached Long in youth soccer and again this summer in the WPSL Elite League, where Long missed the first half of the season with plantar fasciitis (foot inflammation).  If it were up to Riley, Long would have been in London wearing a USA jersey this summer.

“She’s the player that should be going on the plane to London,” Riley said earlier in the summer before the Olympic tournament had started.  “Allie has everything.  She’s got great range of passing.  She’s capable of unlocking anybody.  She can spray the ball around the field.  She disguises passes well.  She sees the game really well.”

Jim Gabarra coached Long for three seasons in WPS and like Riley, viewed her as a player who saw the game better than most players.  And while most WPS players typically attributed changes within a game to cliché phrases like fighting harder or wanting it more, Long could be counted on to give a deeper assessment of the tactics at hand.

On Riley’s praise she said, “I definitely respect Paul’s opinion and I appreciate Paul saying that and believing in me as a player.  All my respect is with Pia and the team for what they have accomplished.  They have really helped women’s soccer.  If my time comes then I will be more than thankful.  That’s what I’m working for.”

The next major tournament for the U.S. is not for three years.  That leaves plenty of time for Long to work her way into the mix.  And while she will not play organized soccer for the next six months she knows there is always an opportunity just around the corner.

“I have a lot of faith that this league will come and work,” she said.  “If it doesn’t I know that there will be something.  I’m not worried.  I am going to just take it day by day.  I don’t think there is a worst when it comes to being able to play soccer for your job.  But at the end of the day there are leagues that start in March.  England has a league that starts in March.  Sweden starts in March.  So I would still have time to consider my options.  But I hope everything (with the new league) works out.”