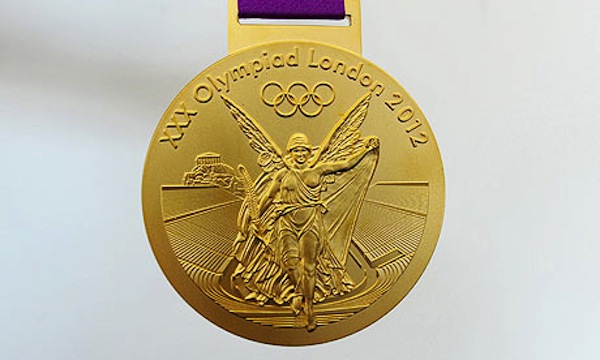 The United States won their third consecutive Olympic gold medal on Thursday, redeeming their loss to Japan at Germany 2011 by defeating the World Cup champions 2-1 at Wembley Stadium. The title was the U.S.’s fourth in five Olympic tournaments (third in a row) and was won in front of the largest crowd to ever see a women’s Olympic soccer match: 80,203.

Carli Lloyd opened the scoring in the eighth minute, running onto a floated cross from Alex Morgan to head the U.S. in front. In the 54th minute, carrying the ball from the middle of the field to the edge of Japan’s penalty area, Lloyd fired into the left netting from 19 yards out to give the States their match-winning goal.

Yuki Ogimi pulled Japan within one nine minutes later, tapping a ball in from four yards out to push the score to 2-1. Despite an ensuing chance from substitute Mana Iwabuchi requiring a lunging save from Solo, Japan was unable to find an equalizer and were forced to settle for the silver medal.

The United States struck early when Alex Morgan, having just taken a heavy touch with her left foot on a ball sent in from Tobin Heath, turned on a ball near the byline and crossed at the far post. Abby Wambach appeared set for a left-footed volley before Lloyd, running past midfielder Mizuho Sakaguchi from the top of Japan’s penalty area, put her head to the ball, giving Japan goalkeeper Mino Fukumoto no chance to get to the opening goal.

Japan had the good chances to equalize before half time. In the 18th minute, Turbine Potsdam standout Yuki Ogimi headed a shot toward the underside of the crossbar only for Solo to palm the ball against the woodwork. In the 33rd minute, Aya Miyama hit the crossbar with a left footed shot from 15 yards out, while Christine Rampone and Hope Solo combine to thwart two Japan chances on a mid-period sequence.

The Japanese hit the woodwork one additional time in the first half, with an errant header from defender Azusa Iwashimuzu in the 28th minute going off Fukumoto’s right post before careening back across goal, with Japan barely avoiding an own goal.

Early in the second, Lloyd gave the U.S. their final tally, dribbling unmolested from midfield to the edge of Japan’s area before putting her laces to a shot to the left side of goal. Fukumoto had no chance to stop a shot that went into the left side netting, giving the 30-year-old New Jersey native her second goal of the match. Again, it was Sakaguchi who was left watching as Lloyd scored against her team.

Japan answered quickly, with Turbine Potsdam standout Yuki Ogimi poaching her team’s first score. Chaos in front of Hope Solo’s goal after another Rampone save left a lingering ball at the edge of her six yard box. Withs the U.S. defense scrambling, Homare Sawa played a ball left to Ogimi, who tapped Japan within one.

Japan’s best chance to equalize came from prospect Mana Iwabuchi, brought on the in the 77th minute for Aya Sameshima. Just outside the U.S. area, Iwabuchi stole the ball from Christie Rampone, the U.S. captain making an uncharacteristic mistake, trying to dribble around an opposing player so close to goal.

Iwabuchi collected the ball and went in alone on Solo, but although she had much of the right side of goal to shoot into, the 19-year-old curled a ball too close to Solo, allowing the U.S. keeper to push Japan’s last good chance clear of goal.

With the victory, the U.S. gets redemption for last summer’s loss to Japan in the 2011 World Cup final. Then, a late goal from Sawa sent the teams’ match into penalty kicks, where Japan went on to win their first world title.

On Thursday, Norio Sasaki’s team had to settle of silver, as a U.S. team that returned 11 members from their 2008 gold medal squad took their turn atop the podium.