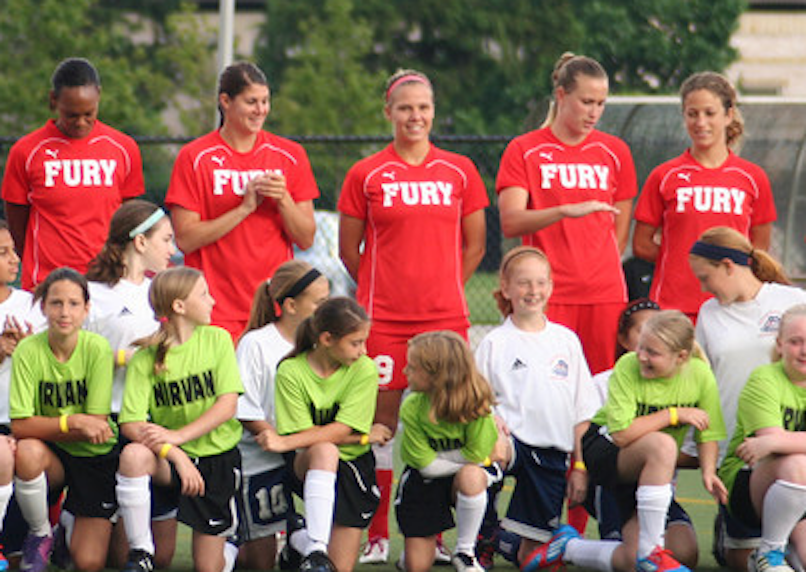 Aaran Lines made dueling substitutions in the 74th minute. By the 80th, Jodi-Ann Robinson and Laura Heyboer each combined with Katy Frierson for the tying and winning goals in a 2-1 victory for the Western New York Flash over the New York Fury.

The win sends the Flash to Saturday’s final where they will attempt to win a third consecutive title — all in different leagues.

“Exactly what they ended up doing for us,” Lines said, when asked what his substitutes did for the team. “We always reiterate that winning a championship is a squad performance. Substitutes need to make an impact when they come into the game.”

Get great offers and free bets on soccer at FREEbets.org.uk.

The Flash trailed for 70 minutes following a defensive miscue that gave the Fury the early lead. They turned it around in rapid fire. First, on a play started by McCall Zerboni, Robinson put a cross to Frierson who calmly wound up and fired. The shot took a fortuitous deflection off defender Leigh Ann Robinson (no relation) and in to level the match and bring a stir out of the pro-Flash crowd at Sahlen’s Stadium.

“The way I was diving I thought it was coming to me,” Fury goalkeeper Michelle Betos said. “Leigh Ann did what she was supposed to do.”

“Once they tied it up there was only going to be one winner to be honest,” Fury coach Paul Riley said.

If Riley really had that premonition as he watched the match unfold, it took only two minutes to become reality. This time Frierson started the play, stepping into a poor Gina DiMartino giveaway and crossing in front to the other sub, Laura Heyboer. Defender Nikki Krzysik recovered well to mark Heyboer but the just-23-year-old Heyboer got a perfect touch to the far post for the game-winning tally.

“You know Laura does stuff like that in training all the time,” Frierson said. “She scores goals that you don’t know where she comes from. She made a great, hard run across and I kind of hit it with pace. Lucky she was able to redirect it and beat her defender to the spot.

“We talked about that a lot before the game that it was going to be that little extra effort. She made that effort on that goal to beat her defender. It was an exciting goal.”

The talk before the match may have been about extra effort, but at halftime it was Lines getting into his players about the nature of the opening 20 minutes.

“I told them at halftime it was girls against women for the first 20 minutes,” Lines said. “We had too much respect.”

The Flash goal began with a pair of corner kicks. The first, from Merritt Mathias, was tapped back out of bounds by goalkeeper Brittany Cameron. The second was poorly cleared by McCall Zerboni and came to Allie Long. The Fury midfielder did not miss, burying her shot to make it 1-0.

By the end of the half the Flash had started to take over the possession, a few times forcing Betos into making quality plays.

“Once we settled down we became a little bit more comfortable,” Lines said.

Still the Fury seemed in control even in the second half until the two quick goals buried their season.

“(Seventy-five) minutes it was our best performance of the season,” Riley said. “And then we just lost our way. We made two catastrophic defensive mistakes. I tell players all the time games always come down to big moments. In those two big moments we didn’t get it done.”

A year ago Riley and several Fury players — including three-quarters of the starting back line — lost the WPS final on penalties to the Flash. That was when they were the Philadelphia Independence. They Fury had one golden chance to get back on level terms late but DiMartino misfired from inside the six. Perhaps, Riley suggested, she was still smarting from the giveaway that led to the game-winning goal.

Western New York advances to face the Chicago Red Stars, who defeated the Boston Breakers in the second of Wednesday’s semifinals.