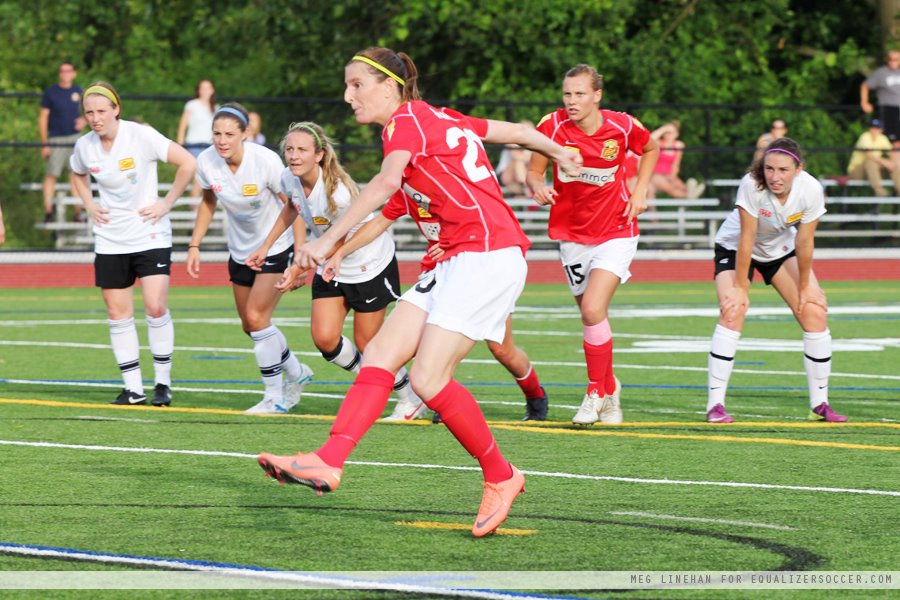 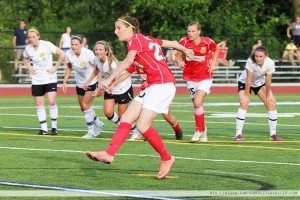 LISLE, Ill. — The Chicago Red Stars ended their 2012 home season with a 2-1 loss to the Western New York Flash on Saturday night. The nearly sold-out crowd at Benedictine University witnessed a thrilling 90-minute clash between two of the top teams in WPSL Elite, replete with quick combination play, physical tackles from both sides, and several balls in the net ruled non-goals due to fouls.

The Flash, who handed the Red Stars their first loss of the season with a 3-0 tally in June, held off a second half charge from the Red Stars to earn a 2-1 victory.

Chicago captain Lori Chalupny said that although the Red Stars were disappointed with the loss, they were pleased with the game’s intensity.

“We were excited for a good battle,” she said. “It really wasn’t about revenge or anything. It was a good game. Back and forth. I think that’s the reason we all play in this league, and it was a good game for the fans. Unfortunately, we didn’t come out on top on this one, but we’ll get a chance at them again.”

The game began inauspiciously for the Red Stars with a bobbled kickoff and steal from the Flash’s McCall Zerboni. Following a pass forward to Adriana, Red Stars goalkeeper Jamie Forbes saved the shot in the first minute of play. Not to be outdone, Red Stars midfielder Julianne Sitch found a bouncing ball off a Michele Weissenhofer flip throw in the 4th minute. Weissenhofer flipped the ball over her head, and volleyed a shot off the crossbar.

Throughout the majority of the half, both teams threatened in the final third. Katy Frierson had a strong showing for the Flash, coming up with a shot in the 24th minute, which was scooped up by Forbes. Red Stars forward Ella Masar tried several through balls to her teammates, with a wide-open Chalupny running on in the 19th minute, but she was ruled offsides.

In the 35th minute, a collision directly outside the Red Stars’ box resulted in a blown whistle seconds before an errant header by the Red Stars defense propelled the ball backwards into the net. Five minutes later another foul was called in the same spot after Red Stars defender Michelle Wenino and Adriana battled for a long ball. Adriana stepped up to score on the free kick, launching the ball past the Red Stars wall into the upper right-hand corner of the goal.

Less than a minute after Adriana’s goal, Wenino retaliated, coming forward for a back post header into the net but the goal was immediately taken away due to a foul in the box. Red Stars head coach Rory Dames called those defining moments of the game.

“The first goal tonight was important, and they got it,” Coach Dames said. “We tied the game. It was the referee’s judgment, and that’s her choice. It is what it is. But we had a header at the back post that we knocked in. So we don’t get that call, and we continue to fight through.”

The Red Stars ramped up the intensity of play in the second half, but faced an opposing side with strong speed of play and quick pressure on the ball. After a tackle and foul on Masar in the 51st minute, a free kick in by Jen Buczkowski was headed towards goal by Alyssa Mautz and saved on the line by Western New York. A few minutes later, the Flash’s Omolyn Davis dove in front of goal, reaching for a long cross only to find the ball snatched away by Forbes. In minute 60, Wenino went one-on-one with Adriana in front of the goal to save a potential open shot.

The Flash’s lead grew in the 75th minute. A Forbes clearance from goal deflected off a Flash player, and a quick-thinking Frierson lofted the ball past the goalkeeper to make it 2-0. Dames acknowledged the error, and praised the Flash’s play in the second half.

“That’s part of the game,” he said. “We gave away two chances, they scored twice. That’s the beauty of the game. They’re a very good team, they’re very well coached, and they were very organized.”

The Red Stars narrowed the deficit quickly, with a goal by defender Lauren Alkek in the 78th minute. Chalupny played the ball to Mautz in the center of the field, who slotted it through to an oncoming Alkek on the right side.

“I wanted to keep the pace of the game up, and get forward to give my teammates some extra people up top,” Alkek said. “Alyssa Mautz had a great through ball, and I was able to run and slide and get the last little bit of it and finish it. It was awesome, she played a great ball.”

The final 12 minutes of the game were furiously paced, with the Red Stars looking for the equalizer. The pressure came from both corner kicks and multiple flip-throws that were launched into the box.

The Red Stars had several opportunities at goal in the last several minutes, but were unable to put one away. Despite the loss, the Red Stars said they are looking ahead to the WPSL Elite playoffs and the opportunity for a rematch with the Flash.

“All of these games are kind of leading us up and preparing us for that championship game,” Chalupny said. “The reason we play is for these kinds of games, and this kind of atmosphere. We’re excited about the playoffs, and hopefully we’ll get one on them then.”

The Red Stars head out on the road this week, with a game against the New England Mutiny on July 19th.