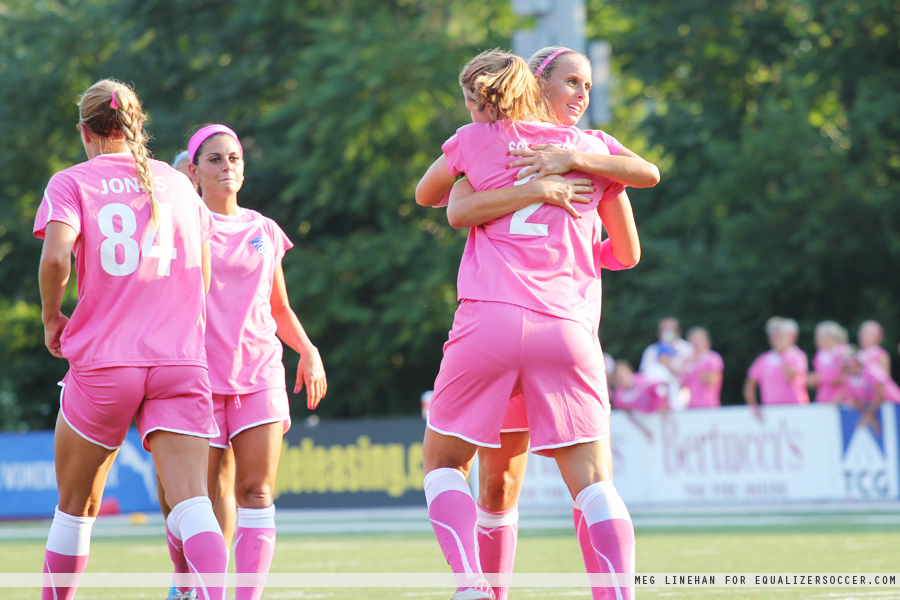 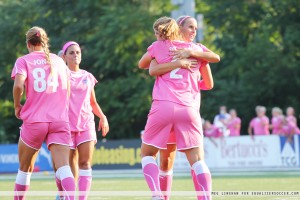 SOMERVILLE, Mass. — In their final home game of the season, the Boston Breakers beat the Philadelphia Fever 2-0 in front of their seventh consecutive sell-out crowd, with an attendance of 2,541. On PUMA Project Pink Night, Katie Schoepfer (13’) and Courtney Jones (42’) scored the two goals for Boston, keeping them in a tie for first place in WPSL Elite.

Philadelphia’s defense was packed in throughout the entire match, leaving them little opportunity to counterattack.

“Last time we played them at home (in Philadelphia), the game ended up 1-0 and they did the same thing,” said coach Lisa Cole. “We knew that they were going to sit back, hope for the counter. We’re just hoping that we would keep the ball moving, open up seams and then take our chances.”

The Breakers kept the pressure on Philadelphia’s defense and keeper, Michelle Dalton. The first chance of the night came in the 4th minute when Breakers’ midfielder Bianca D’Agostino’s shot bounced off the post. Three minutes later, Breakers’ defender, Cat Whitehill, blasted a shot over the crossbar. In the 12th minute, Schoepfer got tripped up in the penalty box, leading to a PK. Scheopfer has been taking the PKs all season and this one was no different, as she calmly put the shot in the net, giving the Breakers the 1-0 lead, and earning her seventh goal of the season.

“It’s just been my job to put them away, so I practice to make sure I’m ready for them whenever they happen,” Schoepfer said of her goal.

Boston continued to pile on the shots. Most of their chances missed the target and the others were saved by Dalton, who often made impressive saves on balls that seemed destined for the back of the net. But, in the 42nd minute the Breakers were able to get on the scoreboard again. Schoepfer took a quick corner to Breakers’ captain, Leslie Osborne. Osborne had some space and got the pass off to Jones, who took the shot from 25 yards out, sneaking it past Dalton for her second goal of the season and putting the Breakers up 2-0.

“We had a corner kick, we ended up taking it short. Their defense was all in the box, a little unorganized,” Jones said of the goal setup. “So, Shep [Katie Schoepfer] passed it to Leslie [Osborne], Leslie was going to take it to goal, but ended up getting stuck. I usually hang out with T [Taryn Hemmings] in the back, but I went up a little farther, got it from Leslie. Their defender came at me, I took a touch to the right, and hit it and prayed for the best.”

The Breakers kept the pressure on in the second half, while the Fever continued to keep their defense packed in. Boston had plenty of opportunities to get more goals on the board but could not finish their chances. However, a win is a win, and Boston was happy with walking away from the game with three points.

“I think a 2-0 win is great for us,” Cole said. “But I also think that we had a lot of opportunities to put the game away and really run up the score and get goal differential ahead of us. But, we’ll take the 3 points.”

The win keeps the Breakers in a tie for first place in WPSL Elite with one game left in the regular season. The Western New York Flash are tied with Boston after beating the Chicago Red Stars 2-1 on Saturday.

One of the other big stories of the night, however, was PUMA’s Project Pink Night, and the fans involvement with the team. The stands in Dilboy Stadium in Somerville, Mass were filled with fans in pink in an effort to support the fight against breast cancer.

“It’s a pretty special night here for us,” said captain Leslie Osborne. “Project Pink Night’s always a big, special game for us, just because of the meaning behind it. And wearing pink and making a statement as professional athletes is huge, especially in the community here in Boston. So it’s always a fun game for us, we get really excited.”

After the game, Osborne also took out the microphone and thanked the fans for their support throughout the season, as well as WUSA and WPS sesasons. The Breakers total attendance for the season was 15,577, leading the WPSL Elite.

“We’ve been saying it all year, that these fans are amazing,” said Schoepfer. “They’re easily the best fans in this league, and I’d challenge that they’re the best fans in any league. They’re very dedicated and they’re smart too, and they know stats and they know players. It’s amazing to play in this kind of atmosphere.”

The Breakers last game of the regular season is on Sunday, July 22 at Western New York Flash. They will then be playing in Rochester again in the WPSL Elite semifinals on Wednesday, July 25.