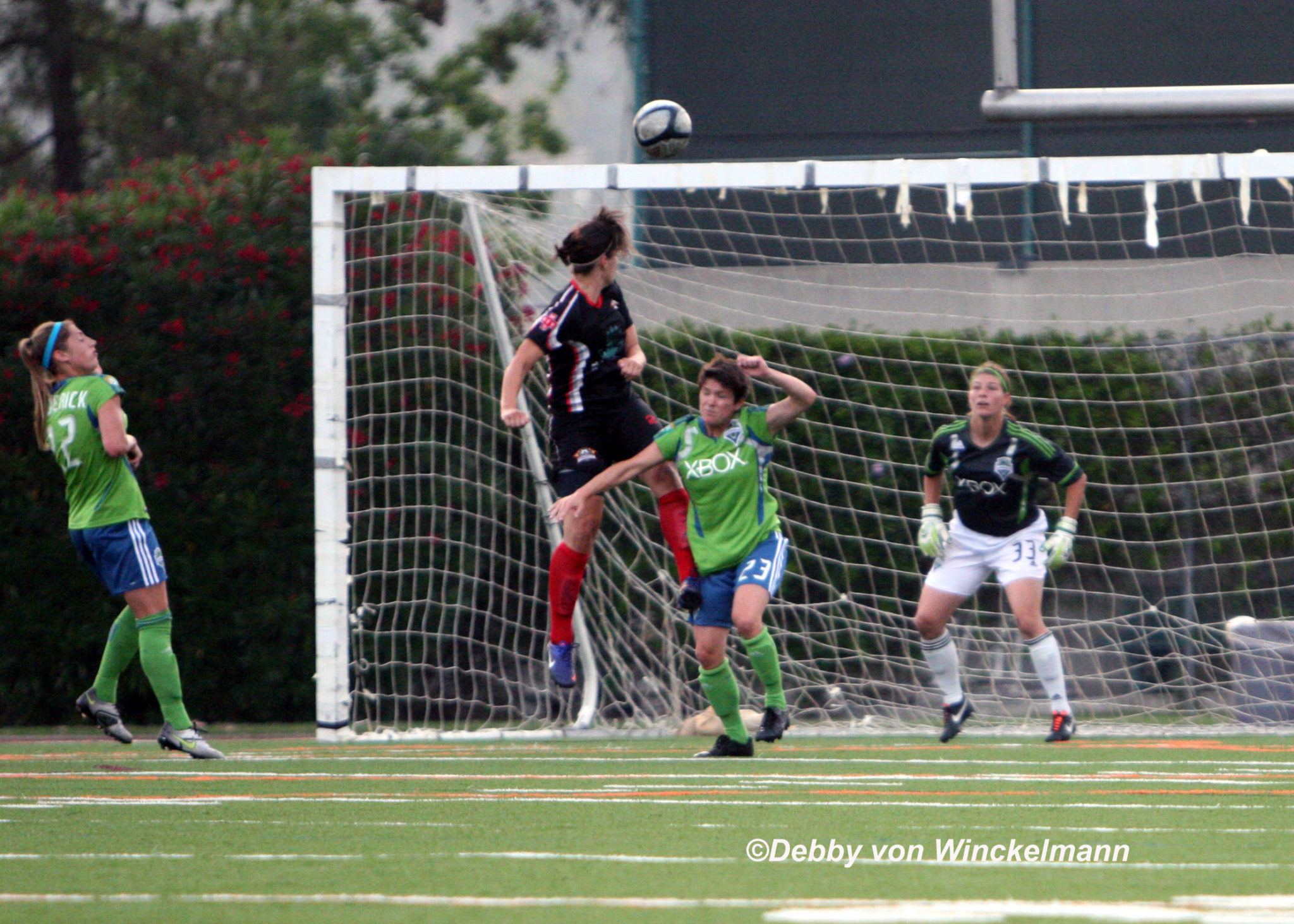 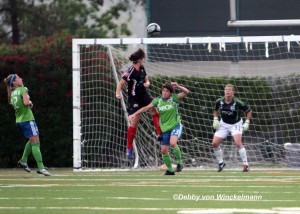 Caitlin Munoz (c) heads in a goal for the Strikers in their 5-2 loss to the Seattle Sounders at Occidental College on Friday night. (Photo Copyright: Debby von Winckelmann)

In their last home game of the season, the LA Strikers were defeated by the Seattle Sounders 5-2 at Occidental College on Friday night.

The Sounders were able to play more of an attacking offense than in their last game, after having two more players join them on their road trip.

“I like that we scored some goals – it was better,” said Sounders head coach Michelle French. “We had a little bit of a better rhythm tonight. It’s always good when you can score five goals. I don’t like giving up two, but it’s good to score five.”

Seattle didn’t waste any time getting on the scoreboard with Lyndsey Patterson scoring in the 5th minute after hurdling over charging Strikers goalkeeper Nicoline Jorgeusen.

Strikers forward Caitlin Munoz headed in a cross from Jamie Bell in the 7th minute, knotting the score at 1-1.

Alexandra Beahan, who hadn’t scored yet this season, found the back of the net twice in the game. Her first goal came in the 16th minute on a ball from Patterson, and she scored again in the 42nd minute to put the Sounders up 3-1 at the half.

After the break Seattle went right back to their offensive attack with Sophie Reiser going far post from the right side for a 4-1 lead just two minutes into the second half.

The Strikers were playing without a few of their key starters, including their central defender and team captain Vanessa Valentine, who suffered a major ankle sprain in their last game. Brown wasn’t willing to blame the loss on those absences, though.

“It’s horrible that you look across our backline and three of our starters are sitting off on the bench,” Brown said. “Obviously it makes a big difference, but at the same time I’d like to think that we can field a good group of players. “

The Sounders Women were able to show that they are a strong team that can score, even without the big name national players. And to think anything else is a disservice to the other players on the team, said French.

“I think we’ve been ‘quietly’ going through the season when we don’t have those players,” French said. “We’ve had to win the majority of our games without them. Do they help us? Absolutely, on so many different levels. But, I am so proud of what this team has done. Now we have two games against Pali left and it will be interesting to see how everything shakes out.”