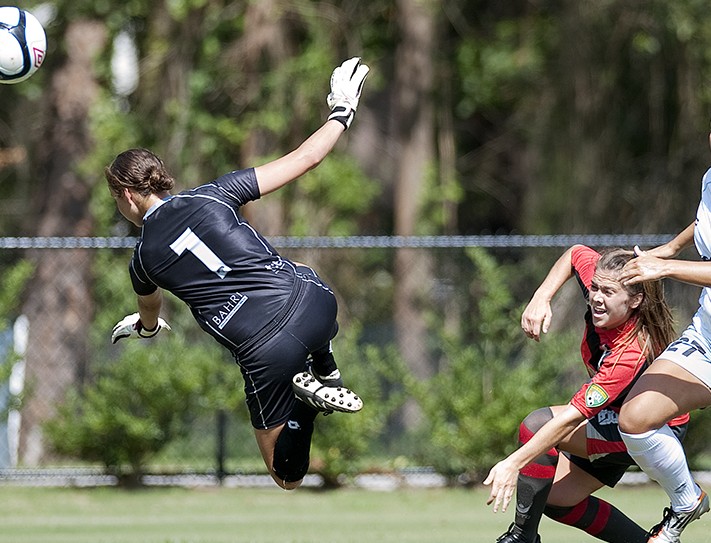 TAMPA/JACKSONVILLE, Fla. – What, on paper, appeared to be an easy path to their fifth consecutive division title has now put the Atlanta Silverbacks’ season in serious jeopardy. Last weekend’s trip through Florida to face VSI Tampa Flames (2-7-2) and FC Jax Destroyers (1-9-1) looked to be a walk in the park for the 2011 W-League Champions. It turned into a crawl through the swamp, though, as dropped points from a dour 1-1 draw in Tampa before a redemptive 8-1 pounding of Jacksonville have put the team’s back against the wall going into the final game of the season.

A sweltering, oppressive July sun beat down on the field for the 5:00 p.m. kickoff on Saturday in Tampa, as the Silverbacks took to the pitch hoping to build on the momentum of Alexa Newfield’s last-gasp, point-saving equalizer against CSC Cobras two weeks prior.

The match in Columbia was not without its casualties, though, as center back Ronda Brooks’ season-ending Achilles injury and midfielder Rebecca Nolin’s one-match ban meant the team would not have the services of its two longest-serving players. Both captains were with the team for their first division title in 2007.

As the match unfolded, it became clear that Tampa were not going to roll over and play dead. The fourth-place expansion team had learned valuable lessons from the previous two matches against the Silverbacks and came out aggressively from the whistle. The heat was an undeniable factor as Atlanta played conservatively, trying to save their energy by letting the ball come to them. Tampa, on the other hand, wouldn’t allow the Silverbacks to coast, putting constant pressure on Atlanta players and doggedly challenging them for possession at every opportunity.

Twenty-four minutes into the match, though, it looked to be business as usual as a pinpoint-accurate pass from Libby Guess opened a window for Kristin Burton. Twenty yards out and tightly-marked on the left flank by defender Shelby Spinelli, Burton jockeyed for position on the ball, spinning her opponent ‘round while quickly firing a gorgeous shot in the same movement. The ball soared past goalkeeper Jennifer Manis into the opposite corner of the net to put Atlanta up by a goal and give Burton her team-leading seventh of the season.

Tampa refused to accept their fate and their constant reservoir of energy despite the heat would pay off before the end of the half. In the 41st minute, a ball played near the edge of the Atlanta box put Tampa forward Jordan Johnson one-on-one with Silverbacks’ goalkeeper Ashley Baker. The England international came out to smother the ball as Johnson shot, but the ball deflected first off Baker, then off Johnson’s face, eventually taking a huge Tampa bounce into the back of the net.

The second half saw more scrappy play by the Flames as they outshot Atlanta 6-3 in the half, but neither team could break the deadlock. A late surge by Atlanta saw several opportunities go unrewarded as substitutes Alexa Newfield and Natalie Martineau each had golden chances to put Tampa away, but the new kids on the block would not yield to the defending champions.

The game ended 1-1, the third draw on the road for a team whose flawless performances away from home led them all the way to the 2011 title.

Fatigued and shocked, the Silverbacks shuffled wearily onto their bus, heading out immediately for Jacksonville. A glimmer of hope began to catch fire amongst the players as news spread that division rivals Charlotte were embroiled in their own tense one-all battle with Southeast fly-in-the-ointment CSC Cobras. Charlotte extinguished that flame shortly thereafter, scoring just before the end of their match and taking maximum points, another potentially-demoralizing blow to the exhausted Silverbacks.

The Charlotte victory saw the Lady Eagles temporarily overtake Atlanta at the top of the division, but with a game-in-hand still to be played the next day in Jacksonville, the Silverbacks had an opportunity to immediately atone for their lackluster performance. 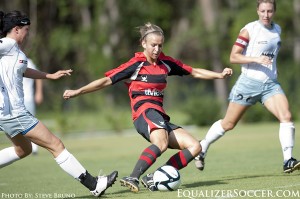 Their response on Sunday against an FC Jax Destroyers plagued by internal strife was emphatic and unquestionable: A bountiful cash crop of goals yielding the team’s highest output of the season.

Captain Rebecca Nolin returned to the pitch having swallowed the bitter medicine of her one-game suspension. Nolin’s energetic persona radiated like a beacon as she led her team onto the field for introductions. Clapping loudly and cracking jokes as each player’s name was called, Nolin’s mood spread infectiously down the line. The Silverbacks’ inspirational leader was back in charge, and the futile struggles of the previous day turned into a blitzkrieg of offense at the expense of the hapless Destroyers.

Atlanta jumped out to a quick lead in the sixth minute as a ball sent to the right edge of the 18-yard-box dropped in front of Alexa Newfield. Under pressure, yet unflappable, the crafty forward shrugged off the challenge of a defender and hung a looping shot just over onrushing Jax ‘keeper Jessica Griffith.

Newfield struck again six minutes later in a mirror-reflection of her first goal as the cheeky forward lofted another shot over the head of Griffith from three-point range, this time from the left flank, much to the chagrin of the twice-beaten goalkeeper.

Tiffini Turpin and Libby Guess each got a whack of the pinata as Turpin took advantage of a deflected strike from Guess to slot home the third goal in the 14th minute. Four minutes later, Guess received a ball to the left of the goal, driving past a defender and sending her shot through the ‘keepers legs*.

The Silverbacks closed out the half continuing to pummel the Jacksonville punching bag as Nolin sent a long-range bomb beyond Griffith’s reach from 25-30 yards out.

The Destroyers gave their fans something to cheer about two minutes into the second half as a counter-attack down the left flank and shot by Lindsay Zullo gave the Destroyers their first goal of the season against the mighty Silverbacks.

Stunned and deflated, Atlanta were only able to muster three more goals against the Jacksonville defense, the first coming less than a minute later as midfielder Stacey Balaam lifted a clever pass into the box, finding Emily Dover. The forward split two defenders as the ball dropped in and rifled a shot past replacement goalkeeper Erin Moseley.

Rebecca Nolin added her second of the night in the 62nd minute as the captain imperiously rose above a scrum in the box to head home a cross from the left flank for Atlanta’s seventh.* Nolin’s brace earned the holding midfielder a spot on the W-League Team of the Week.

Super-sub Nkese Udoh followed suit six minutes later with another header, this time going down to ground level to put a low cross from Kristin Burton just inside the far post.*

The eight-goal performance moves Atlanta (8-0-3) back in front of Charlotte (8-1-2) at the top of the division by a single point, setting up a thrilling season finale in Charlotte this Saturday.

Atlanta have won their division every year since 2007, but perennial contender Charlotte have always found their way into the Eastern Conference playoffs right behind the Silverbacks, with one of the two teams often eliminating the other in the tournament.

This year, that will not be the case as a new (and, quite frankly, bizarre) playoff format will see the “wild card” team of the three-division conference enter the playoffs not on the merits of their own performance, but on the coattails of the top-seeded team. Regardless of point total or won-loss record, the second-place finisher from the top seed’s division mystically “earns” a magic carpet ride into the playoffs.

What does this mean for Charlotte and Atlanta? Of the two teams, only one will advance as DC United have already staked their claim to the best record in the conference, carrying either Virginia Beach or Fredericksburg from the Atlantic Conference on their backs.

Each team has only five wins to their name.

For Atlanta, the mission is crystal clear, yet far from simple: A win or draw on the road in Charlotte is required to secure a trip to the playoffs. A loss to the Lady Eagles means a cold, unjust end to the 2011 champion’s title defense.

*Note: Several of the goals in the Jacksonville game were erroneously credited. According to the statisticians, the scoring was as follows: Newfield (2), Turpin, Newfield, Nolin, Dover, Kansas Bayly, Burton. Even this information conflicts with the box score, though, which lists Burton scoring twice instead of Bayly. The team is attempting to get this resolved and hopefully the league will give proper credit to the players who scored (Guess, Nolin and Udoh).