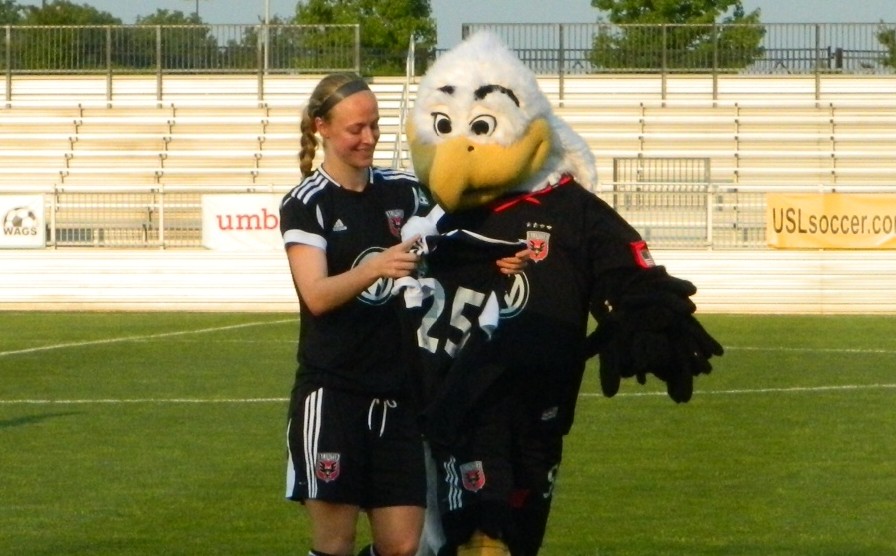 D.C. United dominated possession throughout much of the first half, but they had trouble finding the back of the net. The match remained scoreless until Lianne Sanderson’s strike in the 34th minute gave D.C. a 1-0 advantage. Seventeen-year-old Ashley Herndon was credited the assist. Herndon drew in multiple defenders then passed the ball to Sanderson, who tapped the ball into the net.

Despite D.C. dominating possession for a majority of the first half, the game was tied 1-1 at halftime after Dayton’s Jen Agueci scored in the 44th minute. Dayton managed to equalize despite only recording two shots on goal in the first half.

At halftime, D.C. United head coach Mike Jorden decided to give them an extra spark, telling his players that if they won the game they would host the Eastern Conference playoffs. The move paid off as D.C. United scored three goals within the first 15 minutes of the second half to secure the win.

“We weren’t playing so well in the first half,” Jorden said after the game. “We’ve [had] a couple times were we get one and give one up, and that’s what happened in the first half. They [Dayton] got one right before halftime, which hurt. We found out they (Atlanta) drew, and we had to get it done… We came out with a new attitude in the second half.” 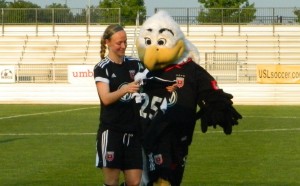 Becky Sauerbrunn received a signed jersey from her teammates before Saturday's match.

The first second half goal came from an unlikely source. Fittingly, Becky Sauerbrunn, who was playing in her D.C. United Olympic sendoff game, scored the eventual game-winner in the 53rd minute. Herndon played a nice ball forward to Sauerbrunn, who was able to chest it down and send a shot where the keeper could not reach.

Saturday’s score was the first in three years for Sauerbrunn, the last coming in the first Washington Freedom game in the WPS era .

“[I’m] hoping it’s a good sign for the future going into the Olympics,” Sauerbrunn said, about her goal. “Maybe I’ll score one there.”

A couple of youngsters were responsible for the night’s final two scores. Both goals were unassisted. USWNT U-17 player Andi Sullivan added the third in the 56th. Herndon added another just two minutes later.

Sullivan’s goal was a lovely long range strike from about 22 yards out. Sullivan was impressive in her first match with D.C. United. She was excellent on the ball and managed to get a few nice looks at goal.

Herndon scored her goal after beating a couple of the defenders and launching a shot that initially hit the post. The ball then bounced into the net, giving D.C. United the 4-1 lead.

D.C.’s flurry of goals ended and neither team was able to notch another goal. D.C.’s lead was never in question as they once again dominated possession in the second half.

After Saturday night, Herndon and Sanderson are now tied for second on the team in points, each having recorded 12. Mikaela Howell leads D.C. United with 23 points.

D.C. United will finish up their regular season by visiting the Virginia Beach Piranhas on Saturday, July 14. Dayton meanwhile have played the Northern Virginia Majestics twice since Saturday. The Majestics won both contests 2-0 to earn their first points of the season.