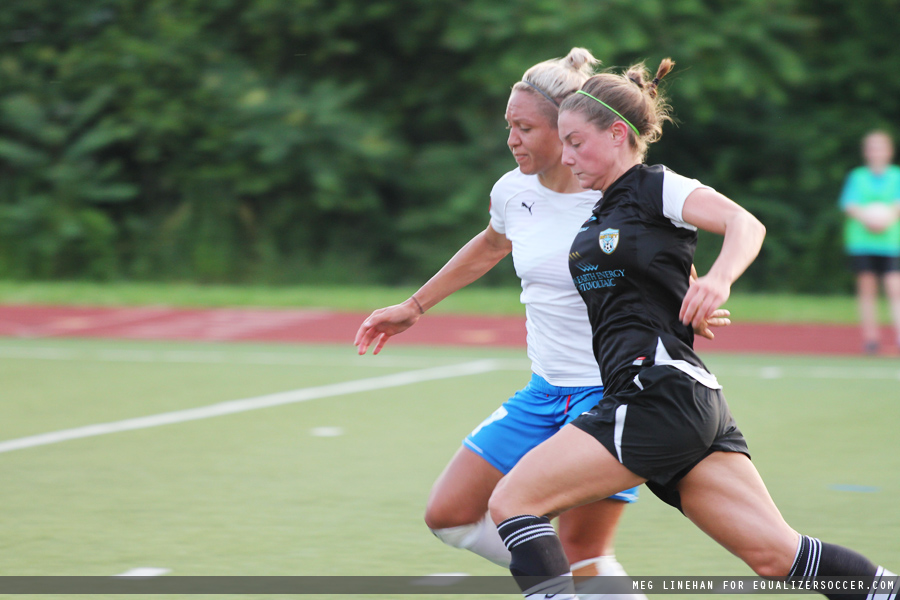 EAST LONGMEADOW, Mass.–What if once upon a time, Cinderella decided not to go home from the ball at midnight and simply kept on dancing late into the night?

That alternate fairytale mentioned above became a reality for the New England Mutiny find themselves in, as they knocked off the Boston Breakers 2-1 in WPSL Elite action on Saturday. The win for the Mutiny not only is a historic one as they become the first “amateur” team to defeat a former WPS squad, it also keeps them alive in the postseason discussion in their final three games.

With a flair for the dramatic, the Mutiny’s Tiffany Weimer and Taleen Dimirdjian scored a pair of goals to give their squad the win in the waning moments of stoppage time.

Weimer used a shifty one-on-one move to deke a Breakers defender and draw the opposing defense out of position as a catalyst for her game-tying goal.

“We had a good feeling towards the end,” Weimer said. “They were playing back and we got a great ball through. She (Breakers goalkeeper Alice Binns) had been making saves all day and I knew that I had to put it where she couldn’t reach it.”

Weimer’s stoppage time goal was merely the warm-up to the game’s final crescendo, Dimirdjian’s game-winner. The goal was aided greatly by a pass from Mutiny forward Becca Mays that was placed nearly perfectly through the goal mouth for Dimirdjian to give just the right amount of touch to put it in net.

Ever the team player, Dimirdjian credits a full team effort in the game’s final minutes to help set up the goal.

“I think our last couple of minutes there were all about hard work,” Dimirdjian said. “We stayed connected up top and that helped us give a lot of energy.”

In the first half, both squads seemed to be embattled in a knockdown, drag-out battle in the midfield, leading to a scoreless tie. That tie would be broken by a goal in the 47th minute from WPSL Elite League scoring leader Kyah Simon, who now has 12 goals.

The goal was a slow roller that skittered past Mutiny goalkeeper Vikki Alonzo.

“Bianca (D’Agostino) put a brilliant ball in behind the defense for me to run on to,” Simon said. “I guess it took a bit of composure for me to slow it past the keeper as she was coming out.”

Simon had multiple chances to add to that tally, but was met by New England’s last line of defense, Alonzo. Alonzo’s impact on the game was immense as she made a handful of key saves against Boston’s top scoring threats.

Alzonzo executed a perfect kick save on what could have been a surefire goal for Amanda DaCosta. Alzono gobbled up the point blank shot from the Breakers’ forward.

In the 74th minute, Alonzo made a save on a shot from Simon that looked destined for the back of the net. Instead, Alonzo ripped the ball away before Simon could get a second crack at a possible rebound.

“She was big,” Mutiny coach Tony Horta said. “She made some key saves for us.”

For the Mutiny, the win certainly carries more weight going forward than the loss does for the Breakers. Boston sits safely in playoff contention, but Saturday’s loss certainly hurts on an emotional level for the team.

“I think we needed to score more, earlier; we need some work in our final third, and be better in our composure,” Breakers coach Lisa Cole said. “But we learned some good lessons today. Hopefully we can what we’ve learned into the playoffs.”

From here, the Mutiny will take to the road to face the ASA Chesapeake Charge and return home on July 19 for their penultimate home game against the first-place Chicago Red Stars. That game will be held at East Longmeadow High School. Boston hosts the Philadelphia Fever on July 14.