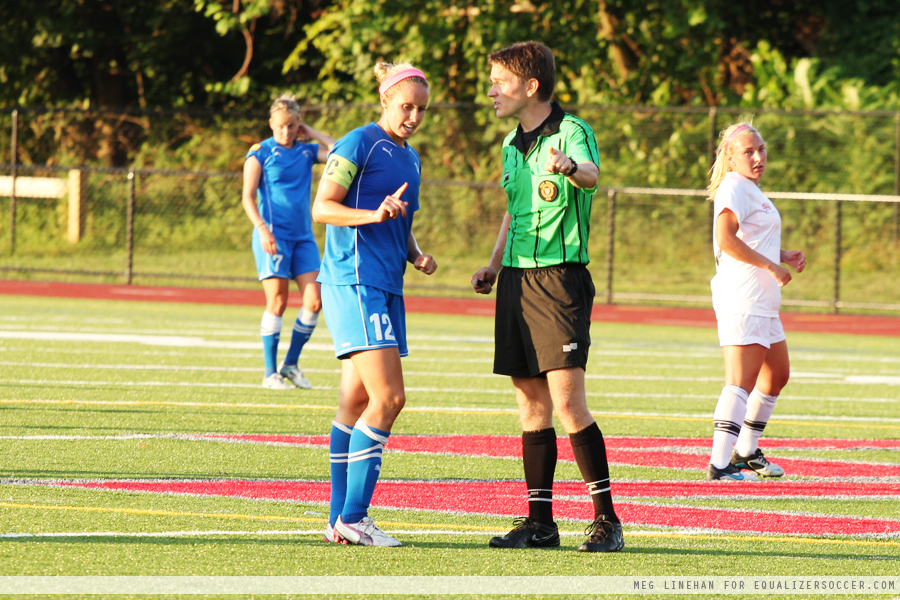 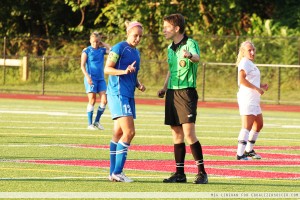 The New England Mutiny pulled off the most shocking result in WPSL Elite thus far this season, scoring two late goals to beat the Boston Breakers 2-1 on Saturday. The loss is a tough blow for Boston, and Meg Linehan breaks down why:

1. The loss will be a particularly bitter pill to swallow for the Breakers. It won’t be because of the upset or the back-to-back play, but because they weren’t able to capitalize on their chances to create a two or three goal lead over the Mutiny. With stellar goaltending from Alice Binns between the posts and a nifty rescue from Courtney Jones to stave off what could have easily been goals from their opponents, the Breakers lacked the finishing touches in the first half. If Coach Lisa Cole’s twitter is any indication, it will be a lesson learned to put the game away early. More importantly, if the team is able to use this as a spark and rallying point, it could create some extra motivation for the rest of July. If nothing else, this game certainly served as a painful reminder that the team cannot simply cruise its way into the finals in Rochester, despite already having a playoff spot clinched.

2. The loss of Amanda DaCosta due to an injury sustained in tonight’s game is an unexpected blow to the Breakers’ postseason plans. While information on her injury has yet to be released, Coach Lisa Cole did confirm that DaCosta was headed for x-rays. Up until her injury, DaCosta had a solid performance in midfield, utilizing her speed to make runs up the flanks and then to push the ball to Kyah Simon. A midfield without DaCosta suddenly puts a much higher premium on keeping Tameka Butt healthy to preserve this aggressive midfielder contribution. Additional focus should also be placed on ensuring Melissa Henderson has fully integrated herself into the Boston offense, which is still a work in progress.

3. While finishing will and should be the main focus for the Breakers, it’s time to admit that the set plays aren’t working. Against the Charge, Courtney Jones technically scored off a corner kick set play, but one that seemed to be modified on the fly by Heather O’Reilly as a short pass that allowed Jones a better look at the back of the net. It’s not that Schoepfer and Jones aren’t sending decent crosses in, it’s that there’s never any real threat from the Breakers in front of the goal. There were some encouraging signs tonight that the positioning is better, with both Leslie Osborne and Cat Whitehill tracking Schoepfer’s corners and heading them in potentially dangerous locations, but the plays simply fizzled out and the Mutiny were able to clear each time. With a corner in the dying minutes of the game, after giving up the tying goal, the Breakers were presented with a corner kick to steal back the lead. Yet there was no nervous ripple of anticipation from the Mutiny home crowd that this play could wipe out the draw, and only a muted round of applause emanated from the stands as the cross in only found the side of the net.

4. Leslie Osborne not only proved her fitness level with 180 minutes of soccer played in 24 hours, but her contributions to the offense have increased. While typically Osborne holds the midfield and uses her position to call advice to her teammates, she ventured up the field more than ever against the Charge and the Mutiny. While she still plays a selfless style of ball by looking to create plays rather than score goals, she is an asset to the offense that could be tapped even further. Her cross in the 2nd half to Kyah Simon against the Mutiny was perfectly weighted and placed as Simon sprinted full-speed up the middle of the pitch. Cat Whitehill also had some offensive moves of her own in the first half, carrying the ball through the entire midfield past a number of opposing white shirts, and managed a shot on goal under pressure.

5. It’s undeniable that officiating played a role in the outcome of the match. Both sides appeared equally frustrated by the referees for a large portion of the match, over missed handballs and fouls, incorrectly assigned throw-ins, and other relatively minor and standard quibbles. On the other hand, the call for four minutes of stoppage time due to substitutions at the end of the second half was questionable at best, considering at that point Amanda DaCosta had yet to go down and be carried off the field. The time was then revised to six minutes after that occurred. In comparison, a similar number of substitutions and a player went down in the Breakers game against the Charge, and only a minute of extra time was played. Consistency is still lacking amongst the referees for the WPSL Elite. And certainly no one can blame the Mutiny for a flash of gamesmanship as they ran out the clock by sending Morgan Andrews jogging back forty yards to set up for the final goal kick of the evening. That said, the Breakers know they never should have let this one slip away from their grasp in stoppage time, no matter how long it lasted.