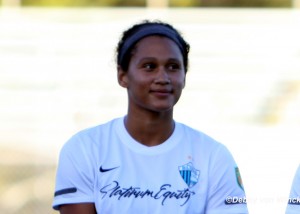 Lynn Williams scored a hat trick on Friday, July 6 to lift the Pali Blues to a 5-0 victory over the Colorado Rapids. (Photo Copyright: Debby von Winckelmann)

FULLERTON, Calif. — With their playoff spot secured, the Pali Blues cruised to a 5-0 victory over the Colorado Rapids on Friday, as Lynn Williams scored a hat trick to help fuel the win at Titan Stadium.

Sarah Huffman scored the first goal of the match in the 28th minute of play, when Michelle Pao sent a long throw into the box, where Mariah Nogueira passed it to Huffman, who just had to tap it into the goal.

Huffman had a couple of other chances, but couldn’t find the net. In the 32nd minute Cami Levin slid a pass into the box, but Huffman’s shot went far left. Christie Shaner lofted a ball into the penalty area, but Huffman’s volley sailed over the crossbar.

While Huffman set the tone in the first half, giving Pali the 1-0 lead, Williams ran with it in the second and put the game out of reach.
Just four minutes into the second half, Williams took the ball up the right side and while it looked like she was sending a beautiful cross to Ann Marie Tangorra, the ball sailed over the head of Rapids goalkeeper Lauren Robertson, for Williams’ first of three goals for the day.

Williams again streaked up the right side, but was fouled, giving Pali a free kick. Huffman stepped up to take it and angled a perfect ball onto the head of Whitney Engen for the 3-0 lead in the 52nd minute.

Williams scored her second goal on a header in the 70th minute from a corner kick delivered by Huffman, who notched her second assist of the game.

Tangorra had a few chances to score, including a one-on-one with Robertson, but her shot went wide left. With what looked like her final opportunity in stoppage time, Tangorra declined to shoot and passed the ball off to Williams, who blasted it into the net for the hat trick.

The Rapids had started the game strong and looked like they would get the first goal when Camilla Larsen lobbed a shot over Pali goalkeeper Anna Picarelli in the 9th minute, but the shot went just wide of the goal.

Unfortunately for the Rapids, they lost starter Katrine Korsdaard to an injury in the 25th minute and lost some momentum, as well.
Pali ended up out-shooting the Rapids 14 to 6.

Still undefeated at 11-0-1, it was the second-straight win for Pali and the 100th win in W-League regular season play for head coach Charlie Naimo, who is still fine-tuning his squad this late in the season. Naimo signed Stanford’s Lindsay Taylor on Thursday and she put in 45 minutes during the game.

The Pali Blues return to Titan Stadium on Sunday at 3 p.m. ET to take on the Colorado Rush. Pali will honor Abby Wambach of the U.S. women’s national team in a halftime ceremony.