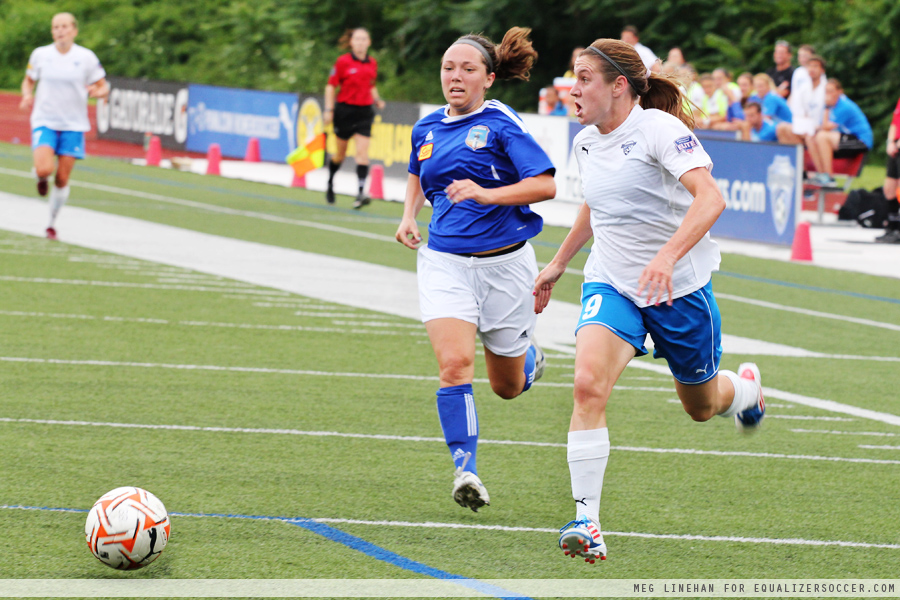 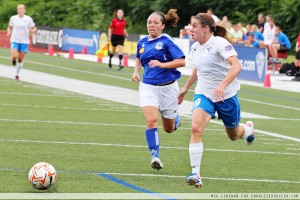 SOMERVILLE, Mass. — The Boston Breakers won their fifth-straight match on Friday night with a 3-1 victory over ASA Chesapeake Charge at Dilboy Stadium. Heather O’Reilly played in her final match of the year for the team as she heads off to the U.K. for the 2012 London Olympics.

O’Reilly assisted on two of Boston’s three goals on Friday, first on Kyah Simon’s opener in the 16th minute and then on Courtney Jones’ eventual game-winning goal in the 53rd minute. Melissa Henderson added an insurance goal for Boston in the 71st minute. Cheyenne Skidmore scored for Chesapeake in the 47th minute.

Meg Linehan was at the game and has a piece on what we learned from the match, as well as postgame video with O’Reilly. Here are her thoughts:

1. With tonight’s game against the Charge occurring 23 hours prior to the next match against the New England Mutiny, most of what happened in this game is definitely outside the ordinary. That said, this match certainly gave coach Lisa Cole the opportunity to use role players and test them in actual playing conditions. Multiple starters rested or played only one half. Both starting forwards Kyah Simon (1 goal) and Katie Schoepfer came off with forty five minutes of play. This was O’Reilly’s second and final game with the Breakers before she leaves for the London Olympics on Tuesday, and her presence, playmaking spark, and speed on the field will be sorely missed during the playoffs. Cole also started the latest addition to the team, goalkeeper Alejandra Velasco. While she allowed one goal and there were certainly some rough edges, Velasco acquitted herself well, and had a few notable punches of dangerous high shots over the bar.

2. Kyah Simon might be the most dangerous player in the WPSL Elite. Simon’s goal in the first half is her eleventh of the season, and she maintains her lead over Western NY Flash’s Adriana for goal scoring. No opposing team has yet to find a way to overcome her speed. Overall, the Breakers’ offense merely needs to fine-tune their finishing. Countless passes were threaded through the Charge’s defense, but too many of these passes ended up in shots wide of the goal or directly at Charge keeper Erin Quinn. If the Breakers manage to work out the kinks in front of the goal, what is already a powerful offense could become completely overwhelming.

3. On the flip side, the defense continues to be the weakest link. How much of tonight’s weakness lies with resting Cat Whitehill for most of the game is debatable. Whitehill certainly provides a calming direction to the back four, and there was a marked difference when she subbed into the game in the 70th minute. The back four’s developing relationship with Velasco might also be partially to blame. Elli Reed seemed unusually vulnerable, and was beat by the Charge’s Cheyenne Skidmore (1 goal) multiple times. Courtney Jones, who is still learning the ropes of defense as a converted forward, once again proved that she is a threat from anywhere on the field with her goal in the 53rd minute. Along with Whitehill, her size and power on the ball are great assets for providing extra offense for the Breakers.

4. The Charge did not roll over. While the Breakers lacked the finishing touches on their passes in the first half, the score at halftime was still only 1-0 in the Breakers favor. Their tying goal from Cheyenne Skidmore in the 47th minute was an impressive strike as she went one-on-one with Velasco, and placed the ball in the top right corner of the net without any hesitation. The game might have finally escaped their reach with Henderson’s goal in the 71st minute, but the score does not necessarily reflect their quality of play.

5. This game, and the next against the New Engand Mutiny, won’t indicate much as the Breakers inch toward the playoffs in Rochester. There are, however, some notable things from tonight’s game that indicate the Breakers could reach the finals on July 28th. The unit of Simon, Katie Schoepfer, Tameka Butt, and Leslie Osborne is locked in. Butt especially proved how much the Breakers are a better team when she’s healthy, and Osborne found small pockets of space to push forward offensively for some effective crosses to O’Reilly. As Melissa Henderson picks up more playing time with the rest of the team, this will only complicate things further for the defenses of opposing teams. A defense that starts Whitehill is far more assuring than the one seen tonight, and keeper Alice Binns has an established relationship with her back four.

Below, Heather O’Reilly talks about her time with the Boston Breakers, the upcoming Olympics, and if she’ll sample the Scottish delicacy of haggis.