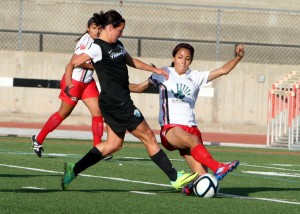 During the Pali Blues recent trip to Canada star players Sarah Huffman & Liz Bogus had time for a quick interview on an off day in Vancouver, B.C. Huffman is playing in her first year with the Pali Blues while Bogus is making a return to the team she played for in 2008. Together they’re a big reason why the Pali Blues are 10-0-1 this season in the competitive W-League.

The Pali Blues are undefeated and demolishing the competition what is the team doing to have such a great season?

Sarah Huffman: I think it started with Charlie (Naimo, head coach) putting together a good team. He’s known for doing that and he did a great job getting some great college players, some young players and then a good mix of veterans that were here before and then those of us that are coming over from the WPS with a good emphasis on playing pretty soccer and winning. I think it’s a pretty good combination.

How will the team continue to be successful and make the W-League championship in Ottawa?

Liz Bogus: I think throughout the season we’ve had an attitude of just trying to improve every game and every week get better and better. We’ve had a lot of different players coming in. I think we just got a couple of more players just last week so just continuing to learn how each other play and just get better and better.

After the WPS cancelled their 2012 season why did you decide to join the Pali Blues?

Sarah Huffman: I live in LA in our offseason, and Europe was definitely an option but for me I just wanted to wait a few months and stay at home with a good team around. LA and the Pali Blues have everything together so it was a pretty easy decision for me to decide to stay home.

The WPS had a lot of success last season and with it deciding to fold where do you see women’s soccer headed in the next few years?

Sarah Huffman: Forward… I mean we can’t stop, we got knocked down again but we just played at Seattle and soccer is thriving up here (Northwest) so hopefully they can come back in some shape or form. Whether it’s more of a PDL (Premier Development League) style I think there’s a market for it. There’s young kids who want to see what they can become and I think there’s plenty of parents who want to show their kids that all that’s involved in soccer are teamwork, and hard work you know.

With that being said should the USL W-League and the WPSL Elite merge together or is it better if they stay separated?

Liz Bogus: I really don’t know hopefully we will have some kind of professional league come back but I guess in my opinion I think that we should try to get it condensed into one league but that’s really just an opinion on my part. I don’t know all the logistics with everything and everything that’s involved in making that happen. It would definitely be nice to have one league, maybe different conferences where ultimately all the teams are competing against each other.

After the Pali Blues season is over where do you see yourselves playing next?

Sarah Huffman: For me personally I’m not sure.

Liz Bogus: There are leagues overseas but in terms of in the US I don’t think there’s anything except for W-League. 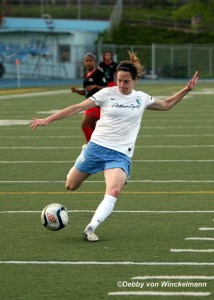 Are you weighing your options to see what’s available?

Sarah Huffman: Yeah and seeing priorities and that kind of thing. I’ve played in Norway, I loved it and it was a great experience but the timing might not be right. I just think there’s a lot of factors that go into moving. I think it’s awesome, I would definitely recommend it for people but for me personally I don’t know where my life is going to take me in a few months.

Liz Bogus: For me it’s up in the air still. I don’t know what I’m going to be doing exactly this fall. I’m kind of considering going and playing somewhere but nothing is determined right now.

It’s difficult to make the U.S. Women’s National team and with a few players retiring after the London, Olympics and speculation that coach Pia Sundhage might return home to Sweden do you feel your chances to make the national team might improve in the future?

Sarah Huffman: I have played on the national team and it’s just an evolving thing I think that’s a tough question. Yeah a coach could change a lot but they could also not change a lot. I learned a long time ago not to put all your eggs in one basket just because you don’t make the US national team it doesn’t define you or who you are. Who knows.. I’m sure the coach will change some things and won’t change others. There are so many great players in the US and so many people who can get the job done so I just hope they win the Olympics and I hope they always continue to thrive and win whether that’s with or without me on the team. Of course it’s a dream.

Can you talk about the amount of support women’s soccer has received since the World Cup last summer? It seems like fan support has taken off and grown in a huge way.

Sarah Huffman: Yeah I think it just was put out there that there was a league but depending upon the market you have fans it’s just tapping into the right market and the right venue. Wasting $20,000 on a stadium to rent out for a game when you only have maybe 400 (fans) come just seems like a silly expense.

A lot of professional soccer players including yourselves have trained with www.beastmodesoccer.com in Los Angeles can you talk about that?

Liz Bogus: He’s an individual trainer and has a lot of different clients, kids, and adults, who come and train with him and get soccer lessons and he’s trained us and he’s a great trainer and a great guy.

Liz Bogus: For me 7 has always been my favourite number growing up I played it in club teams, and college teams. It has no significance it’s just my favorite number to wear.

Sarah Huffman: I wore it a long time ago and I was also always #10 and Lori Lindsey was 10 on the (Washington) Freedom and I just went back to 14 and it’s been able to stick.

Soccer is a big part of your lives but when you have free time and are away from the team what do you like to do?

Sarah Huffman: Sit at the beach, read, hangout with friends, and drink coffee.

Liz Bogus: Drink coffee, try out different restaurants, I do like doing outdoorsy things but I don’t get to do that as much as I’d like.

Would you like to add any final comments or thoughts about soccer or anything else?

Sarah Huffman: We just appreciate all the fan support and we appreciate you guys covering women’s soccer and I think both Liz and I really hope the game continues to grow and that there are avenues for people to play professional soccer whether that’s for us or in the future. I definitely think it’s important that the fans know it’s really fun for us to play in front of a crowd. We’re more than willing to give back to the game too.

Liz Bogus: I’m definitely thankful that we have the W-League and other leagues here to play in and I do hope that going forward they can build off of that and grow and bring back a professional kind of league. Definitely I’m very appreciative of all the fans it’s been kind of neat to see some of the fans from WPS still really keeping interest and still following us in the W-League and the different leagues. Hopefully we keep their interest and move forward with it.