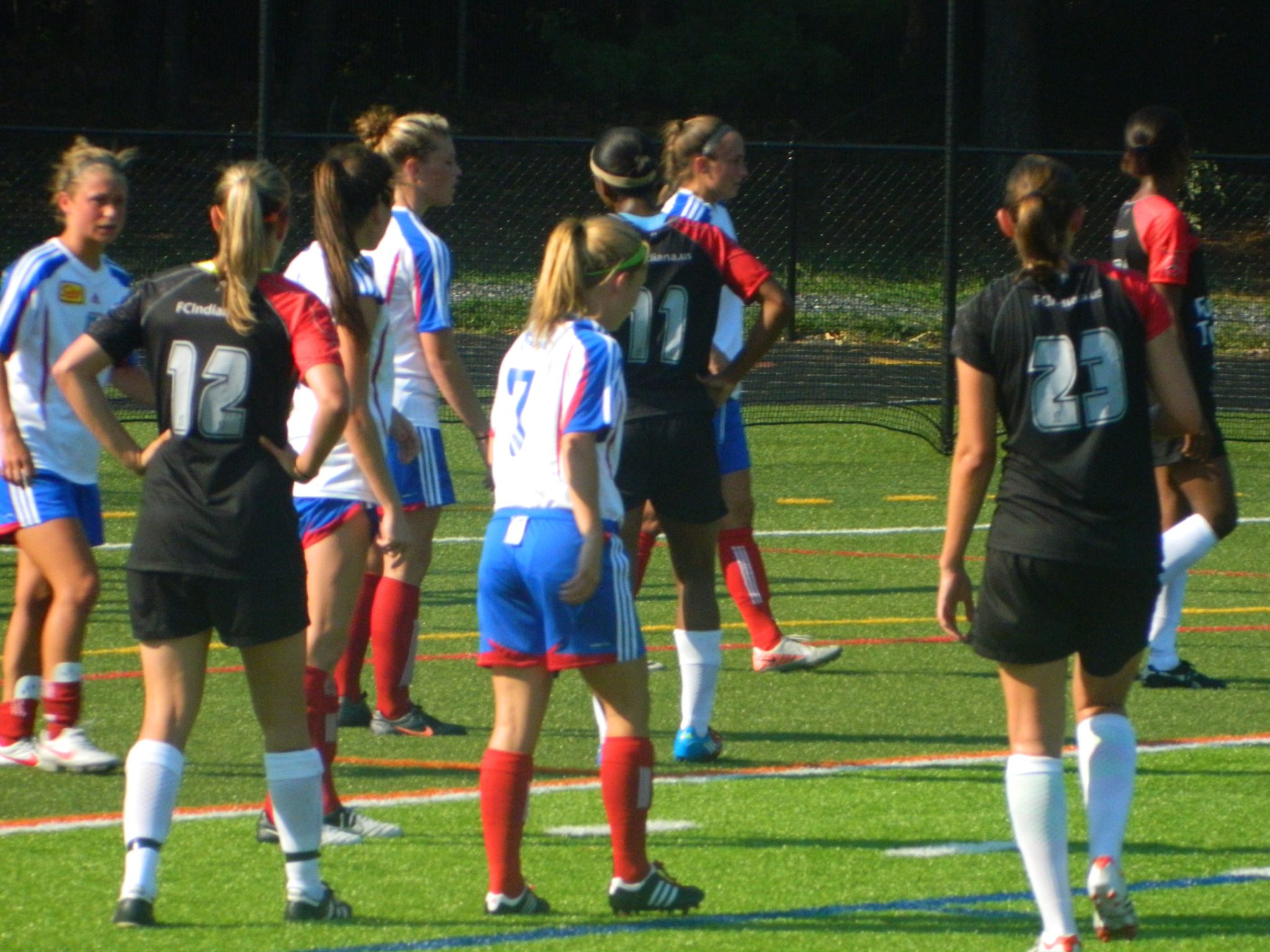 The good news for the ASA Chesapeake Charge in the first half: FC Indiana did not often find themselves in their offensive half of the field. The bad news for the Charge: FC Indiana made it count when they got there. FC Indiana scored twice in their first three shots to take a 2-0 lead by the 22nd minute.

Despite dominating possession throughout much of the game, it appeared as though the Charge were destined for another loss. Thanks to late goals by midfielders Riley Barger and Christine Nairn, the Charge were able to equalize and after more than 102 minutes in the sweltering heat, the game ended in a 2-2 tie.

In the early going, Chesapeake had control and dominated possession. Unfortunately, as was the case all afternoon, their attack seemed forced. Players on the flank would attempt a pass in the final third that awaited only the players from the opposing side.

Both FC Indiana’s goals were the result of essentially the same scenario. The Charge sent numbers forward, leaving their defensive end of the field exposed.  FC Indiana’s offense was able to capitalize on this as they were much speedier than their opponents.

On both goals, FC Indiana launched the ball forward well ahead of the Charge defense, essentially leaving Chesapeake goalkeeper Lyndse Hokanson as the only remaining obstacle. Nadia Valentine scored the first goal in this fashion in the 18th minute.  Sophia Batard extended FC Indiana’s lead a few minutes later in the 22nd minute.

After the two quick scores by FC Indiana, Chesapeake made some adjustments, including moving Megan Gibbons forward from her usual defensive position to contribute more to the Charge attack. The move proved advantageous for the Charge as Gibbons provided a couple of quality chances.

The Charge controlled possession throughout the majority of the second half. Unfortunately, they still could not find the back of the net. FC Indiana managed to keep Chesapeake off the scoreboard until late in the second half.

The bright spot for Chesapeake on Sunday was Barger. She showed superb vision when distributing the ball and stayed composed under pressure. Fittingly, it was Barger’s strike in the 86th minute that gave Chesapeake a chance to salvage the game.

Following Barger’s goal the momentum swung heavily in favor of the home team. Despite the swing, another goal seemed improbable given the team’s offense woes. Before Sunday’s game, the Charge had only one multi-goal game all season. That game came back on May 27th against the Philadelphia Fever.

But as often the case in sports, the seemingly improbable occurred. Less than two minutes after Barger’s goal, FC Indiana came close to scoring a third goal that would have dashed Chesapeake’s hope at a comeback. A FC Indiana forward broke free from the Chesapeake defense leaving only the keeper between her and goal. Hokanson did a good job of making herself seem big and the ensuing shot when wide.

In the sixth minute of stoppage time, Barger was fouled about 20 yards from the net, giving the Charge a golden opportunity to even the score. The subsequent free kick was taken by Nairn and the well placed ball found the back of the net.

There would be another seven minutes of stoppage time but neither side could find a third goal. Nairn had the best chance in the 98th minute, but fortunately for FC Indiana the shot went wide of the goal.

After the game Chesapeake Head Coach Albert Oni said his team could have been better.

“It was a poor performance today as far as playing a complete game,” he said. “We fell asleep on defense and made some mistakes we should not have made and we paid the price for it. On Offense, we didn’t make the best decisions and we weren’t able to make the most out of our attack.”

Barger echoed her coach’s sentiments regarding the need to play well for 90 minutes. She also felt like coming back from the deficit helped boost the team’s confidence and showed that they do belong in the league.

Notably, FC Indiana got its first string of results this season. Prior to the team’s win against the Fever on Friday, they had only one point. Following Sunday’s match, FC Indiana’s tally had risen to five.

FC Indiana looks to continue their upward trend when they play Philadelphia Fever at home on Thursday July 5th. Meanwhile, Chesapeake will need to play 90 minutes of good soccer in order to compete with the Boston Breakers on Friday July 6th at Dilboy Stadium.