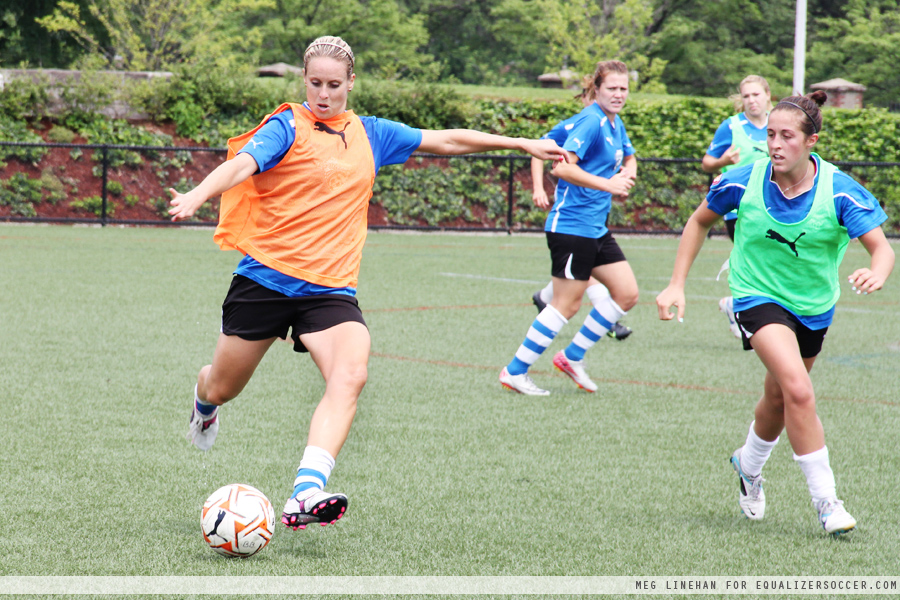 One day before their rematch against the Chicago Red Stars, the Boston Breakers held practice on a field behind Harvard Stadium. The weather went from a light rain to a sudden glaring heat, but the focus and intensity remained constant. With only five games left in their WPSL Elite season, tomorrow’s battle has large implications for the standings with the playoffs looming only a month away.

If the Breakers feel any pressure, they certainly know how to hide it. Instead, coach Lisa Cole and team captain Leslie Osborne stressed a theme in Friday’s practice: to constantly improve, to find faster touches and merely continue what’s worked for them so far this season. With the news last night that a second goalkeeper has been added to the roster in Colombian national team backup keeper Alejandra Velasco, the pieces for the postseason are starting to come together.
While the addition of Velasco is an extra level of security, the contributions of rookie goalkeeper Alice Binns should not be overlooked. She has frequently been clutch for the Breakers this season. During a short-sided drill, Binns made a save while contorting her entire body mid-air to punch away a shot from close range. Amanda DaCosta was impressed from her vantage point and nudged at a teammate’s shoulder, asking, “Did you see that? She just looked like a ninja!”

After Saturday’s rematch against the Red Stars, the Breakers’ next challenge is two games back-to-back. They face the ASA Charge on July 6th at home, followed by a brief road trip to the western part of Massachusetts to face the New England Mutiny on July 7th. Considering the performance of Morgan Andrews and Kate Howarth in the Mutiny’s recent tie against the Western New York Flash, the rematch with the

The Breakers could offer a tempting chance to pick up three points in the hunt for the fourth playoff spot.

The Breakers look to be in a very promising place to make a postseason run and bring a championship back to Boston. Saturday’s game against the Chicago Red Stars should provide an excellent indicator of the level of play between these two contenders for first place in the WPSL Elite.