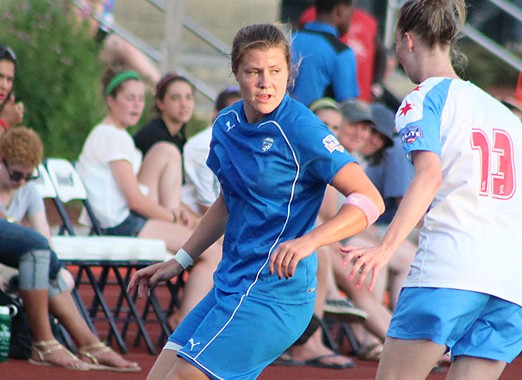 SOMERVILLE, Mass. –The Boston Breakers moved back into a tie for first-place with Chicago Friday night in front of 2,092 fans – their fifth straight sell-out in Somerville, Mass. The match seemed destined to end in a 0-0 draw, until Kyah Simon broke the scoreless tie in the 89th minute with her 10th goal of the season, giving the Breakers the 1-0 victory over the Chicago Red Stars.

Breakers’ coach Lisa Cole has said in the past that the team needs to improve how they start games. Tonight was no different, as the tall and physical Red Stars put on the pressure. Neither team could find a rhythm in the first half – both getting few chances and having trouble maintaining possession.

“Today, I felt like they took us out of our rhythm,” Cole said, post-match. “[They] took us out of what we wanted to do, at least in the first half. We just need to be able to start that half composing ourselves a little bit better.”

In the second half, Boston was able to create more opportunities, which came in big part from the back line being able to wear down Chicago’s attack.

“I think we’re probably one of the fitter teams in the WPSL Elite,” Cole offered. “So we hope that we’re wearing down teams. We hope that teams are, at the end of games, looking tired while we’re looking fresh.”

“I think we opened up a few more opportunities in the second half and I think our runs were a bit more direct and helpful for our midfielders to play in those balls.”

The Breakers’ backline has not been a consistent four players for much of the season, but they still managed to get their fifth shutout of the season with impressive play all around.

“I think our defense has come leaps and bounds since the beginning of the year,” defender Cat Whitehill said. “We’re all on the same page. We’ve had a lot of different lineups. Courtney [Jones] started last week, Elli [Reed] hasn’t been here the whole time. Everybody’s stepped in and played awesome. And Alice [Binns, keeper] is holding down the fort back there, and I’m really proud of her.”

Both teams had chances in the second half, but besides an Ella Masar shot for Chicago in the 68th minute that hit the crossbar, few chances seemed destined for the back of the net. That changed in the 89th minute when Courtney Jones made a long run down the sideline and was able to get the ball off to Katie Schoepfer who redirected it to Simon in front of the net. Simon took an off-balance shot, but it found its way past Red Stars’ keeper Jamie Forbes, for what proved to be the game-winner.

The Breakers needed a big boost to get that winning goal, and much of that can be credited to the performance of Courtney Jones, who came on for Jess Luscinski in the 79th minute.

“I was really proud of her. It’s always hard to be in the starting lineup in one position and then come in as a sub in another,” Whitehill said of Jones’ performance. “And she took it in full stride and she was the biggest impact on the field the 10 minutes she was in the game. You love to see that from a player like Courtney. She’s a true professional, and she’s got the speed, so it’s fun to play her the ball up there.”

Earlier this season, the Red Stars handed the Breakers their only loss so far, and Boston wanted to make up for that.

“[Boston] knew that Chicago had been ahead of us in the standings, with us losing the points,” Cole said. “That kind of irritated them. But I think what they were more focused on the fact that Chicago had beaten us, it was our only loss. So they wanted to get even on the year.”

The Breakers did manage to get even, and move back into a tie for first place with four games left in the regular season. Included in those four games are back-to-back games next Friday and Saturday.

“Some rest and recovery,” Cole said about preparing for the back-to-back games. “We’ll try to keep practices a little bit shorter and I’m going to use more players. A lot of minutes have been played by our starting eleven, so we’re going to have to use some other players, which I think is exciting.”

The Breakers are back in action Friday, July 6 at home against ASA Chesapeake Charge. They will then make the trip out to the western part of the state the next day to take on the New England Mutiny on Saturday, July 7.