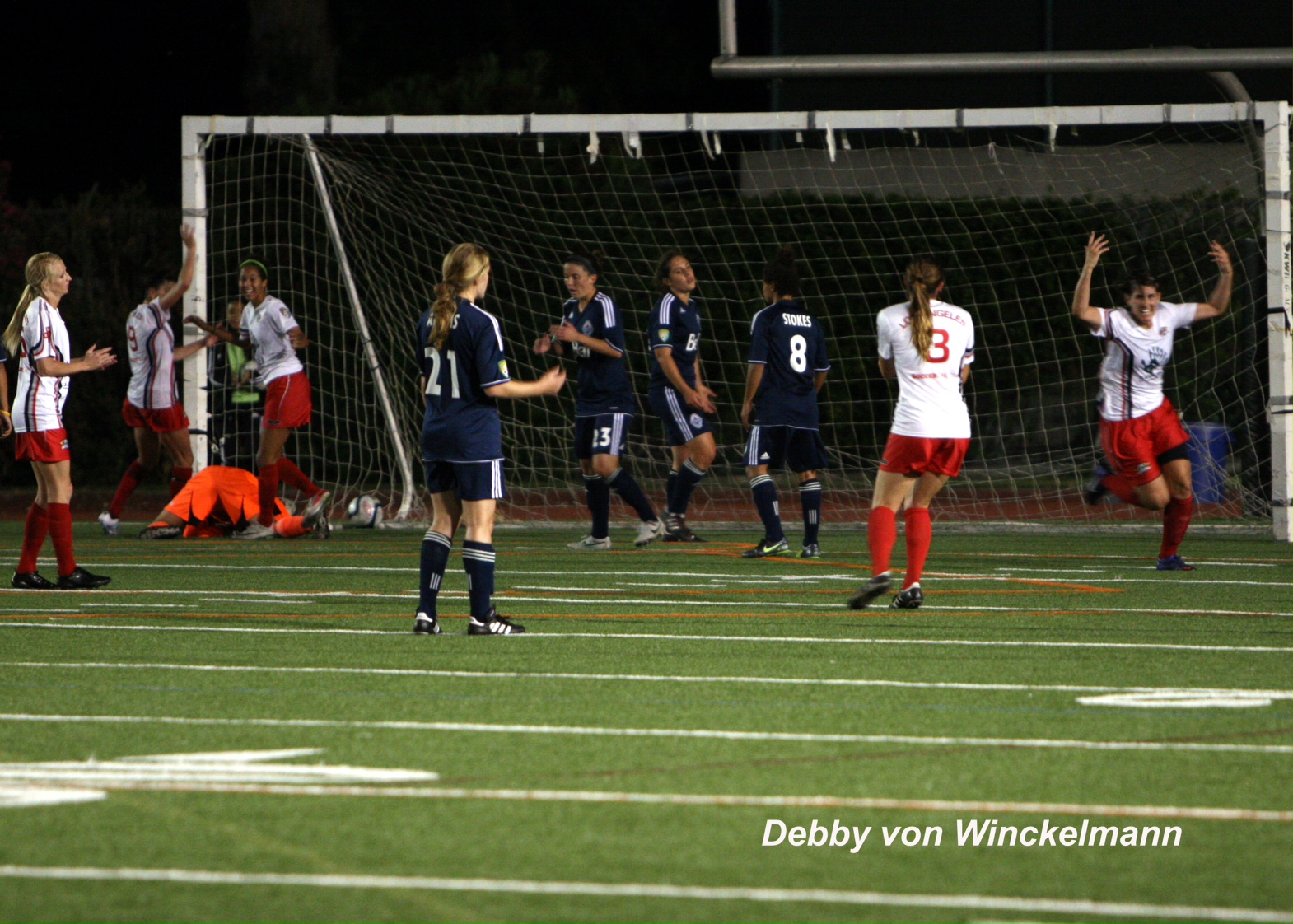 Even if your team is down two goals with only 15 seconds left in regulation time.

For the LA Strikers on Friday night, facing that scenario was not enough to make them throw in the towel. Instead of coming away with what looked to be a 3-1 loss to the visiting Vancouver Whitecaps, the Strikers kept fighting and were rewarded with a 3-3 tie.

With the Whitecaps leading 3-1, the Strikers were awarded a penalty kick after Vancouver was called for a handball in the penalty area. Laura Stockdale converted the shot and closed the gap to 3-2.

Two minutes of stoppage time was added to the clock and the Whitecaps’ Jenna Richardson took the ball to the left corner of the field to stall for time. LA’s Ashton Larkin and Wendy Warner were able to knock the ball free and the Whitecaps committed a foul as the Strikers moved toward the goal.

Australian international Amy Chapman took the free kick from about 10 yards outside of the box,  finding the head of fellow Aussie Caitlin Munoz for the equalizer.

“Amy put a nice ball in and I kind of ran on it,” Munoz said. “It was near post and I just headed it far post, and yeah, it was lucky it came.”

The end of the game was frustrating to the Whitecaps, who had the offensive edge for most of the game.

“As a group we need to be able to manage games and giving away unopposed penalty shots and a free kick in injury time is unacceptable,” said Vancouver head coach Jesse Symons. “Full credit to their players. They worked extremely hard and deserved the result. Unfortunately, we gave this one away tonight.”

The Strikers were first to get on the board with a goal by Mel Fernandez in the 15th minute, but Vancouver’s Richardson made her way through LA’s defense and knotted the score at 1-1 in the 27th minute.

In the 38th minute Richardson sent a cross from the left side to teammate Jaclyn Sawicki, who buried it into the back of the net for the 2-1 lead.

Richardson and Sawicki combined for several more opportunities in the second half, but couldn’t finish their chances. In the 70th minute Richardson broke past her defender and put the ball on the ground and into the left corner to put the Whitecaps up 3-1.

“I felt like there was a great amount of space in front of their back line and we definitely capitalized on it,” Sawicki said. “And then, the last couple of minutes we just couldn’t hold them off. “

Richardson, who took a game-high four shots, was impressive in her attack.

“Jenna Richardson tonight was unbelievable,” Symons said.” She was full on, she caused a lot of troubles, scored two goals and set up one. Credit to her, she had a phenomenal game tonight and probably deserved a couple more, actually.”

For the Strikers, their best chances to score came from Jaime Bell, who came off the bench in the second half and found space up the right side a couple of times. Chapman also had a chance, sending a shot just right of the post in the 71st minute.

“Vancouver was very good on the day and I thought we did well to keep them at bay,” Brown said. “They had the lion’s share of the ball and created some great chances, but I think, even in the first half, that we did well enough to stay in the game, which is what’s important. Especially for us, where it hasn’t been easy for us. So, finding any little thing to keep us positive and to keep us going is what we’re really trying to do. And, nothing better than today and two minutes at the end of it.”