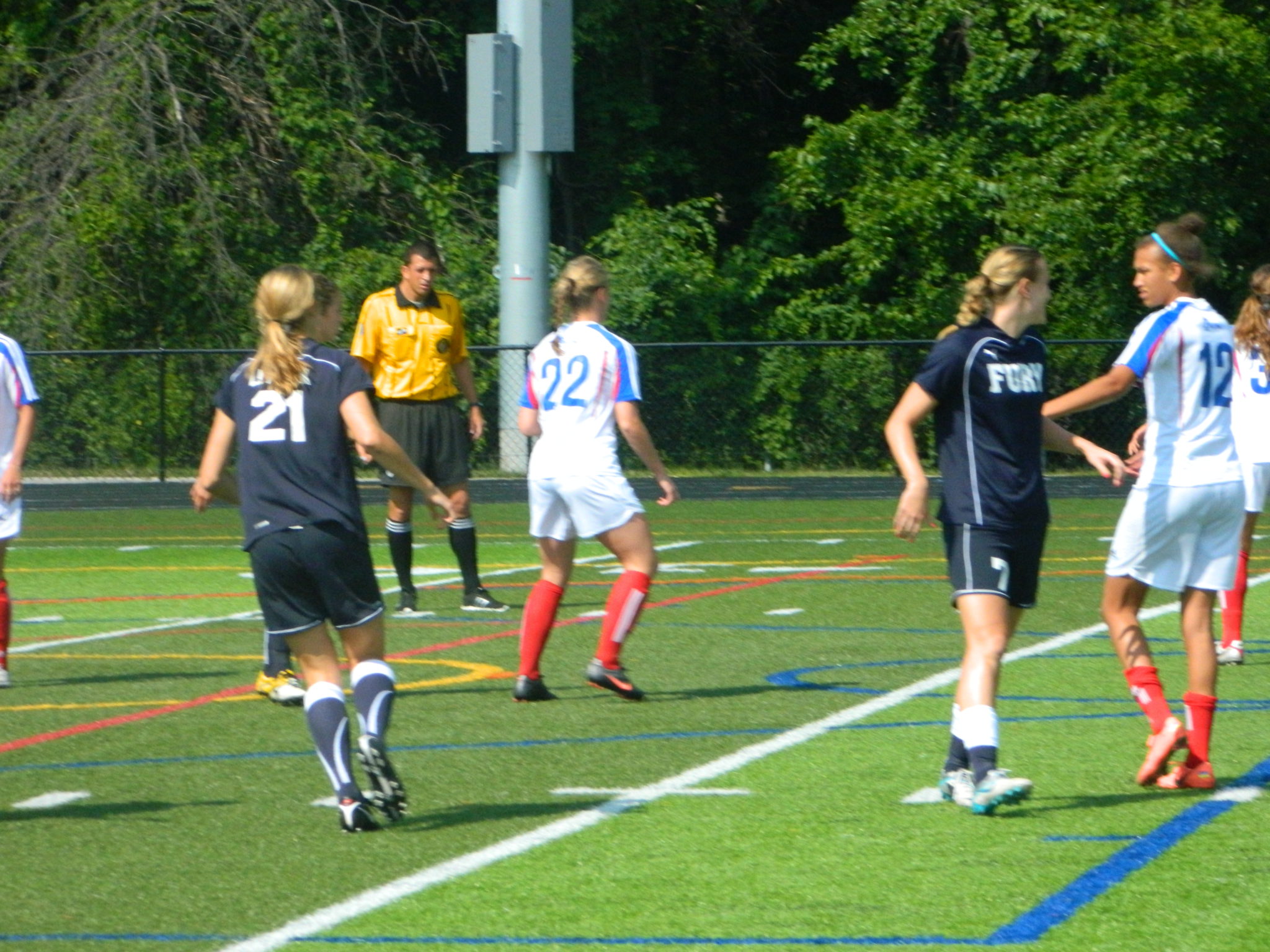 The 1-0 scoreline can be the byproduct of any number of different scenarios within the course of a soccer match. Thursday night at Hofstra University the New York Fury defeated ASA Chesapeake Charge on a Meghan Lenczyk goal, but it was the Charge who appeared to take more satisfaction out of the match.

“I thought the Fury had a really strong side, they’re a fun team to play against, and I thought our team competed well,” Charge coach Albert Oni said. “I thought we probably played our best game of the season. I’m never happy about a loss but I’m happy the way we competed with them.”

If not for a decided pace edge for the Fury backline over the Charge forwards, the amateur team from Maryland may well have found the equalizing goal. The Charge played several balls into space on counterattacks, but each time the Fury backline rose to the challenge.

The Fury improved to 6-3-1 (19 points) including a perfect 5-0-0 against WPSL Elite’s “bottom 4” but the result outdid the performance.

“I think we played okay in patches,” Fury coach Paul Riley said. “I don’t think we had enough bite again tonight. It was about six levels below a WPS match.”

Lenczyk’s goal was a noted exception. It was the 32nd minute and the Charge were on their heels courtesy of some fancy ball movement by the Fury. The play culminated with Leigh Ann Robinson—probably the best Fury player before leaving in the second half with an injury—whipping a cross from the right side to a streaking Lenczyk, who redirected it from point-blank range.

“Great goal,” Riley said. “But that was one of the few times where the ball moved four, five times, one touch-two touch, with zip and great pace. That was a WPS goal.”

The Fury were almost always in charge of the possession, but rarely looked dangerous in the final third. Riley has been searching for answers throughout the season, particularly at striker where the Fury have not been a strong finishing team. Lenczyk’s goal was their 10th in nine games since they put five on the New England Mutiny to open the season.

“I think we’re on the outside looking in to be honest with you,” he said. “I think the other teams are better than we are, they’re better up front.”

Riley further suggested that former WPS players might be having some difficulty getting geared up to play WPSL Elite matches against weaker opponent in front of smaller crowds.

“They walk out and they say well it’s not WPS so maybe we’ll just give 75 percent tonight. Maybe not just us either,” Riley said.

As for the Charge, the loss dropped them to 1-7-1, but their final five games offer opportunities to improve their standing to reflect how much their play has improved. To that end they have yet to play the Mutiny, Fever, or FC Indiana at home.

“Albert does a good telling us what to expect so that if we’re scored on and we’re down we’re not going to get discouraged,” said Megan Gibbons following an active game at right back. “It’s frustrating, but it’s good experience.”

Oni said some of his players have returned to their colleges for camps and reported back that “the game seems to be going in slow motion.”

“We can tell the team to play faster in training. That means nothing,” Oni said. “But when they come out here and that pressure is facing them on the field now they understand why they have to play faster. And in the second half (tonight) we came out and played a little bit faster.”

NOTES: the Fury played without injured Kia McNeill and Sinead Farrelly as well as Tina DiMartino who has taken a job… …Allie Long played her first match of the season, going the full 90 in her traditional defensive midfield spot… …Christine Nairn is expected to join the Charge in time to play Sunday against FC Indiana.

Pali comes from behind, beats Vancouver 2-1
New women’s soccer league in the works for 2013 following meeting in Chicago