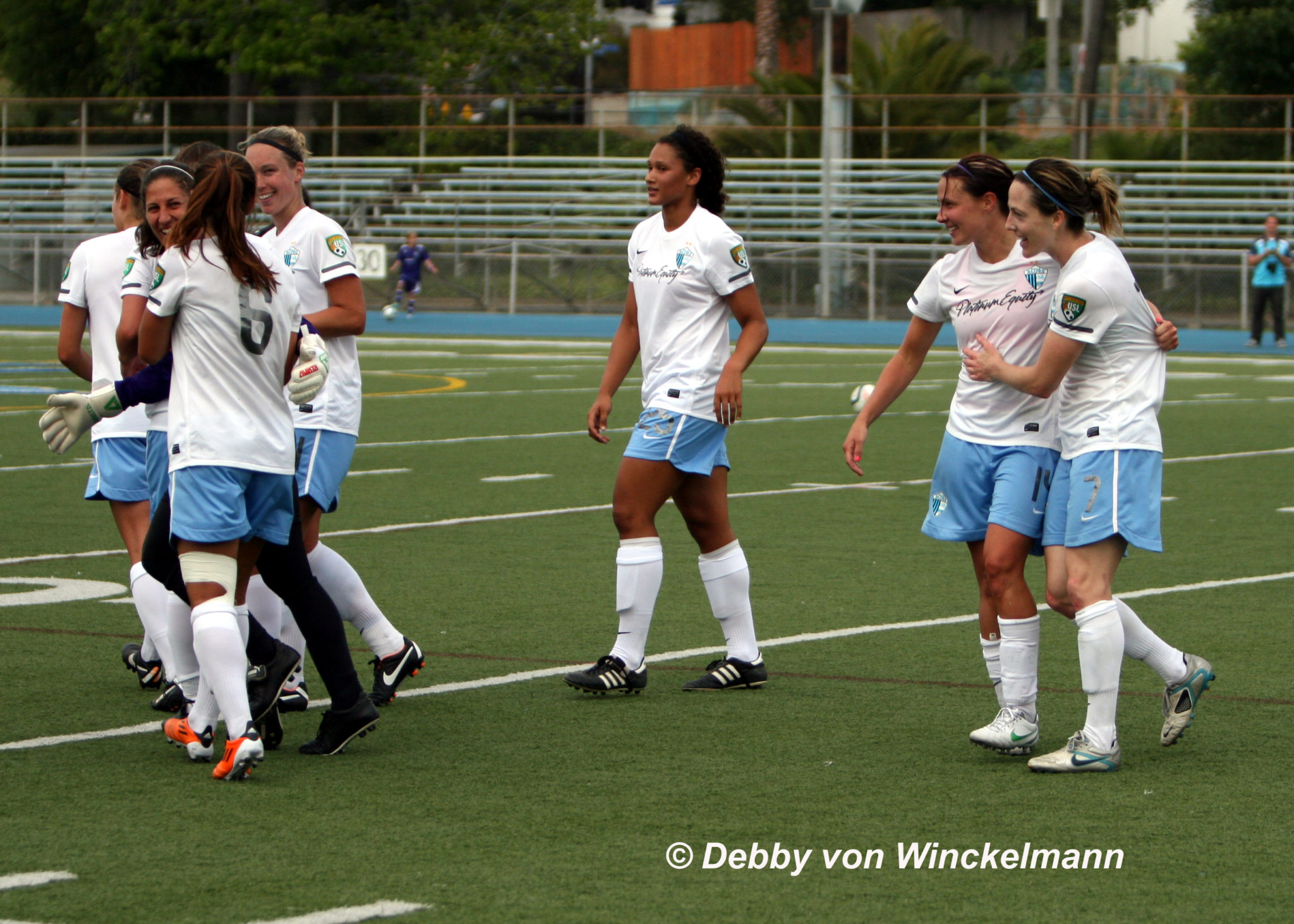 NORTH VANCOUVER, B.C. – The Vancouver Whitecaps faced their toughest competition in the USL W-League on Sunday afternoon at Kinsmen Stadium, in North Vancouver and came out with a surprising 0-0 draw against the league leading Pali Blues.

The Pali Blues were playing their 3rd game in five days after previously defeating the Seattle Sounders 2-0 on Wednesday and the Victoria Highlanders 4-0 on Friday. Pali Blues are the class of the W-League and a force to be reckoned with having outscored their opponents 26-2 so far this season. Perhaps there traveling around the Pacific Northwest this week left them a little gassed but even if that was the case the Pali Blues are tough to compete against. Imagine how great the Pali Blues would have played if they were healthy, well rested and playing at home. The Vancouver Whitecaps caught the Pali Blues at the end of their long road trip and they knew they could take advantage of a tired opponent.

The Pali Blues controlled the ball and kept most of the possession in the opening half. Vancouver seemed to be caught off guard by the skill level of the visitors. With the amount of time spent in the Whitecaps end of the pitch Pali should have come up with a goal. The Whitecaps back four of Demi Stokes, Shannon Woeller, Jenna Carosio, and Danielle Johnson did a great job of clearing the ball away whenever it landed in a dangerous spot.

Nikki Washington had the best opportunity to score for her team five minutes in when her curling shot just missed the top right corner. Lynn Williams and Washington are the top two goal scorers for the Pali Blues and Vancouver did a great job of getting back and collapsing when Williams and Washington tried to get behind the defense. With the Whitecaps focused on preventing goals their offensive game was non-existent in the first half. Vancouver was simply content with booting the ball up the field out of harms way. You could almost say the Whitecaps implored the strategy of Greece when they shockingly defeated Russia at Euro 2012 earlier this month.

The second half of the game was a lot more balanced in terms of possession. Whitecaps coach Jesse Symons must have given his team a few pointers on where the ball needs to go in order to score a goal. Jenna Richardson was the most dangerous threat for the Whitecaps and had two great chances to score in the second half when she broke down the left-wing and cut in only to have both of her shots miss the net. Richardson’s speed seemed to cause the Pali Blues some trouble and unfortunately for Vancouver, Richardson couldn’t harness all her strength to put one by Pali Blues goalie Anna Picarelli. Whitecaps leading goal scorer Mele French, who had a pair of breakaways in a 2-0 win over the Santa Clarita Blue Heat on Friday, was kept in check and didn’t get the open space she likes to have to create beautiful goals.

The Pali Blues had a significant edge when it came to set pieces. The Whitecaps committed 17 fouls to Pali’s 5 and Pali had 4 of 5 corners all in the second half. Sarah Huffman crossed the ball into the Whitecaps box on several occasions but nothing materialized to give Whitecaps goalie Gurveen Clair any trouble. Huffman was shadowed by English international Demi Stokes all afternoon. Stokes is among the W-League leaders in fouls committed and she did a great job of limiting Huffman’s time and space when she received the ball. If you give a creative and talented player like Sarah Huffman time and space she’s going to hurt you and that’s why the Whitecaps game plan included shadowing her.

Demi Stokes shared her thoughts on the game and her man marking assignment on Sarah Huffman.

“We came into this game and we knew they were a good team and they have great players on their team,” she said. “We knew that we just had to come in and help out and work for each other and we knew that if we did that we would come out with a good result. A tie is good against the best team in the league and we deserved it.

“(Sarah Huffman) is a good player but I had to maybe change my game plan to what I usually would do but I felt I dealt with it well and felt as a team we dealt with their individual players too.”

Woeller did a great job anchoring the Whitecaps defense against Pali Blues and her aggressive play and terrific instincts have proven to be a key asset for the team all season long. Woeller talked about the defensive performance of her team postgame.

“Their top in the league right now so it was a good performance for us we were really strong defensively I think we’ve really come together defensively so it was a good performance to get another shutout,” she said. “I think we just stayed compact moving together. I think at the back we’re all really smart players so as long as we communicate I think we can probably control anyone in this league.”

The best chance to score in the second half came off a Pali Blues corner when substitute Anisa Guajardo had her shot on target blocked in front of the goal-line by Whitecaps forward Marissa Mykines. Just before the final whistle blew Pali Blues lost one of their outstanding defenders when Christie Shaner fell during a scramble for the ball in the Pali Blues box. As the play carried on up the field play was eventually stopped so Shaner could be attended to. Shaner looked to have injured her leg and was carried off the field by two of her teammates.

“I don’t know what it is yet but obviously her health is really important to this team and will figure out what it is and get her back on the field as soon as possible,” Pali head coach Charlie Naimo said after the game.

Naimo wasn’t making excuses for his travel logged team after the game.

“I thought our team worked really hard and I’m proud of them for battling through tired legs,” he said. “It’s a tough trip, three games and a lot of travel in six days. That was our 10th game so the fact that we stepped it up in the second half and went after the game I was happy with our team but I would say that Vancouver’s a good side and they’re going to give teams problems for the rest of the league season for sure.”

Overall the Pali Blues are the most talented and hard-working team the Vancouver Whitecaps have faced all season. With the pitch being in poor shape, and the fatigue factor possibly being an issue Pali Blues still manged to show why they are the best W-League team. Credit must also be given to the Whitecaps for putting together and carrying out a solid defensive game plan that kept Pali Blues scoreless for the first time this season. After a couple of days of rest the rematch between these teams should be fantastic, and it all takes place this Wednesday, June 27, at Palisades High School in Santa Monica, California at 10:00 p.m. ET.

Vancouver is now 2-3-3 (9 pts.) but unbeaten in five-straight matches.

Notes: Pali Blues midfielder Liz Bogus missed the game with a hamstring injury and is expected to sit out the remainder of the season so she can rest before a potential playoff game. The Whitecaps will play all three Californian W-League teams in the next week while on the road. The attendance was 755.