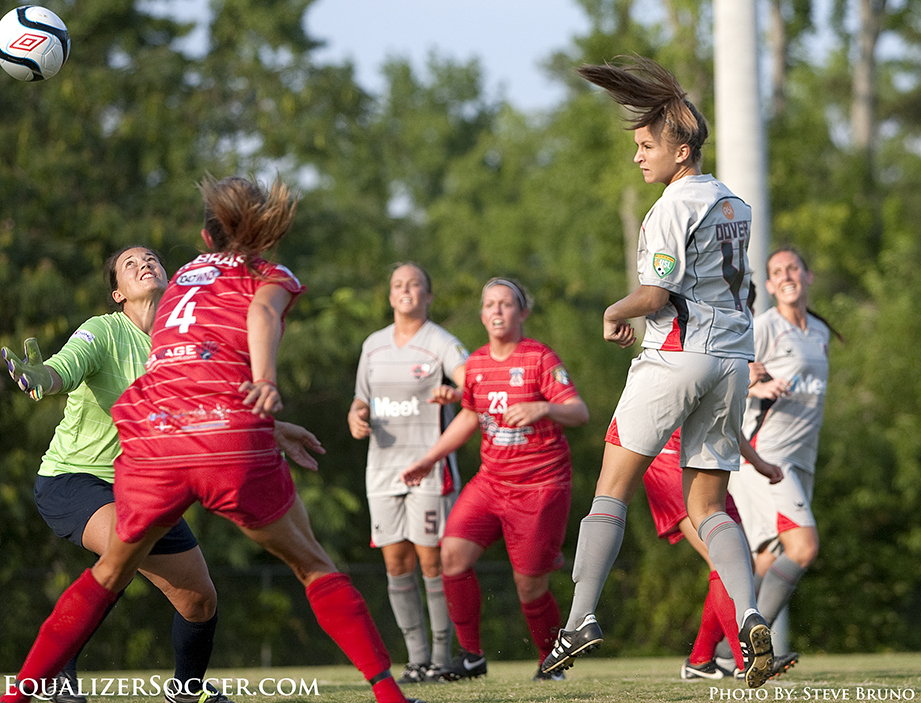 COLUMBIA, SC – Coming off their biggest win of the season Friday night against Charlotte, the Atlanta Silverbacks knew their away game against the Central South Carolina Cobras could easily be the proverbial “banana skin” game. The team, however, could have never foreseen the surreal match which unfolded in Saturday night’s thrilling 2-2 draw.

With Middle Eastern-themed music droning through the speakers moments before kickoff, the Silverbacks may have begun to get the feeling they weren’t in Kansas anymore as they stepped onto the pitch. The team had ventured into this undiscovered territory without the guidance of offensive leaders Libby Guess and Kristin Burton, while forward Rachel Garcia was off the roster as well, nursing an injury picked up the previous night.

As the opening whistle blew, the Silverbacks charged the goal and immediately created a threatening opportunity as captain Rebecca Nolin fired a round from distance over the Cobras’ goal within the first 30 seconds.

True to their mascot, though, the Cobras struck back fiercely, pushing hard toward the Atlanta goal and pressuring ‘keeper Ashley Baker into immediate defense with a shot on goal from the right flank. The Cobras continued to push numbers deep into the attacking third, earning four corner kicks in the first 10 minutes.

On the other end, the Cobras’ defense played its usual high-pressure, physical style with goalkeeper Christina Reuter shifting and organizing players from the net.

There were signs the Cobras were getting under the Silverbacks’ skin in the 32nd minute when Tiffini Turpin tried to fend off the challenge of a defender near the sideline. As the ball went out, a frustrated Turpin turned and complained to the referee that her ankles were being clipped, but spiced it up with some saucy language. The ref warned the Atlanta forward, pulling her aside as she continued to argue the call. It was an early indication that the Silverbacks were being drawn into a dark place.

Before her frustration got the better of her, head coach Chris Adams subbed Turpin out in the 34th minute for Emily Dover, deciding tired legs following a full 90-minute run against Charlotte the previous night had neutralized his flying winger.

The substitution appeared to be a stroke of genius when, two minutes later, the Silverbacks netted their first goal. A 36th minute corner kick whipped into the box from the left by Nikki Hill connected with the head of Nolin, who popped the ball back in front of the box despite being tightly marked by two defenders. Dover rose up for the loose ball and headed it past Cobra ‘keeper Reuter for the score. *Note: The goal has been credited to midfielder Jamie Pollock and has not been corrected as of this writing.

The half closed out without much fanfare and the Silverbacks huddled under a palm tree to plan their second half strategy. The next 45 minutes, though, would see the team quickly meltdown as the season very nearly unraveled before their eyes.

Two minutes into the half, distribution off a goal kick from Reuter set the stage for a quick Cobra attack as forward Tabitha Padgett moved the ball urgently down the left flank, crossing in to Jamie Stewart who put it past Baker for the leveling goal.

The Silverbacks had a chance to retaliate minutes later when a foul 25-30 yards wide to the left of goal set up a prime scoring opportunity. Inside the box, Nolin wrestled with a Cobras defender as she looked to get her head on Bailey Powell’s long service to the far post. The players became entangled as the ball dropped in and Nolin was brought down inside the box. Nolin appeared to have a legitimate gripe for a penalty, but the ref blew his whistle for a goal kick instead. Her competitive spirit enraged, Nolin vehemently argued her case to the referee.

Like Turpin earlier in the match, the Cobras’ physical tackling had Nolin visibly frustrated. Unable to restrain herself, though, the midfielder spat a venomous insult directly in the defender’s face, drawing a gasp from the crowd. With no alternative at this point, the referee issued a yellow card to Nolin for her abusive language.

As a few moments elapsed while the referee noted the booking, the assistant referee called him over to the sideline, quietly, but firmly, reminding him that children were present and he should take that into account in his decision. Clearly influenced by the AR, the referee changed his mind, pulled a red card from his pocket and hunted down Nolin, already on the other side of the pitch awaiting the goal kick. With no explanation from the referee as to why the color changed, Nolin was ejected in the 52nd minute, much to the bewilderment of the coaching staff and the delight of fans who taunted the devastated captain.

The Silverbacks’ coaching staff continued to press the referees loudly from the sidelines and were warned just over a minute later for protestations following another call. Ten minutes after the first ejection, assistant coach Matt Holmes was sent off as well for his continued barrage after the official seemed to miss a call on a handball. Even louder and more demonstrative than before, several vocal fans heckled the Silverbacks from across the field as Holmes made his way to the locker room.

Within seconds of play resuming, Cobra forward Tabitha Padgett received a yellow for a knockdown on Stacey Balaam in the midfield. It was the first of a flurry of cards which would be issued, five total in the last 30 minutes, as the pitch broke down into a warzone.

Now spurred by their numerical advantage, the Cobras scored again in the 73rd minute as a serve into the box from deep in the midfield found Christina Stern, who turned and rifled the ball just under the crossbar to put the Cobras in front.

“They had the extra belief that they could rattle our cage a little bit,” Balaam said. “We just needed to stay disciplined and we lost our heads during the game and that affected us.”

The situation had deteriorated from bad to worse and seemed to reach “worst” a minute later.

Realizing they had their opponents battered and bloodied, the Cobras resumed their attack, improbably off a counter from a Silverbacks’ throw-in, with Baker coming up big to stop the shot. Unnoticed as players dispersed for the goal kick, Silverbacks’ captain and center back Ronda Brooks stayed down with an injury from the play. Time was eventually called after the Cobras mounted another assault and Brooks limped off the field to be replaced immediately.

With all three of their leading scorers unavailable, both captains out of the game, down by a goal and down to ten players, it seemed any glimmer of hope for a point had been extinguished.

The feisty offensive steamroller from the University of Georgia had entered the game as a sub in the 70th minute. Still struggling to find her majestic form in an injury-shortened season, the closing act would give the 5’5” wrecking ball an opportunity to impose her single-minded will on the game.

In the 78th minute, Newfield drove the ball in from her left wing position and fired a bending strike from distance toward the far post. It required a supreme diving effort from Reuter to keep the ball out, but the ‘keeper managed to latch onto it, preserving the Cobras’ lead.

As the game wound down, or, in this case, up, to the 90th minute, midfield play broke down completely and the teams played end-to-end. After a half filled with cards, ejections and injuries, the referee added six minutes of stoppage time.

Shortly after earning a card herself for a shove in the back, Newfield received a ball near the center of the box and appeared to be in on goal when fellow forward Emily Dover crossed her path and busted the play. A cathartic scream erupted from Newfield, who had just seen their best opportunity to equalize go awry.

Newfield again pounded on the door in the 95th minute, taking a free kick just outside the box, only to carom it harmlessly off the defensive wall.

Fate would gift Newfield one final chance to pull a rabbit out of her hat in the 97th minute as the Georgia star got an eerily-similar repeat of the earlier botched play. A free kick over the top again saw Newfield and Dover converging at the edge of the box with an opportunity to get on the ball. This time, Dover peeled off as Reuter charged out of the net to grab the ball.

“I honestly don’t even know who played the ball over the top,” Newfield said. “The ‘keeper came out to the edge of her box, I was just going up for the ball trying to get a touch around her. I guess (I) ran into her and then I looked down and the ball was just kind of bouncing at my right foot, so I just tried to stay composed and just placed it in.”

The collision left Reuter in a heap as the Cobras ‘keeper gave her all to stop Newfield, who had calmly deposited the ball in the back of the net in the aftermath. As the referee blew his whistle once, confusion broke out. Was it a foul? Was it a goal? One person knew.

“I saw him turn and point to the halfway stripe; I knew it was a goal,” Newfield said afterwards. “It was a good feeling.”

With Reuter still down, the referee blew his whistle three times a few seconds later. Players, fans, even the official scorer were still in the dark as shouts of “What’s the score?!” rang out amongst the stunned crowd. Nearly two minutes of nervous chatter passed before the final result flashed on the scoreboard: A 2-2 draw with Newfield’s goal the last action of the match.

“I just had a feeling that someone on the team was going to get one,” Newfield said of the Silverbacks’ late surge. “With so many chances eventually it had to go in and, thankfully, it did.”

Atlanta players gathered around their bench, debating whether or not to take a cool-down jog, with several suggesting they should just leave as quickly as possible. Many fans were outraged at the final score and players were genuinely concerned it might spill over onto the field. Some fans even seemed to be going onto the pitch, challenging the players to “come over here”, which added to their trepidation. In fairness, though, the fans were likely calling to several children who were playing near the Silverbacks’ bench. Regardless, the players took their point and got out of town.

“(I’m) proud of the girls for wrestling it back, playing 10-versus-11,” Adams said of the positives he took from the game. “That one point could be very huge.”

Following the unsettling events of Saturday night, a weekend off couldn’t come at a better time. Adams says he’ll give the players a week off before a back-to-back series against the Florida teams in two weeks.

“I think we’re all excited about a little time off,” Balaam said, adding that factors such as heat and multiple back-to-back games have taken their toll on the team. “We’re all fatigued…. It’s tough and it’s wearing on our bodies. We need to come back with the mindset that we need to carry on where we left off and prove we’re a national championship side.”

The draw puts the Silverbacks ahead of Charlotte in the Southeast Division based on their superior goal-scoring and with a game in hand. If the team can sweep through Florida, the season finale in Charlotte should only have implications in the race to host the Eastern Conference playoffs as only DC United have a better record than Atlanta.

Red Stars come from behind, beat Charge 3-1
Flash take on Mutiny on Sunday in W. Mass.