Silverbacks down Charlotte 1-0 in top-of-table clash 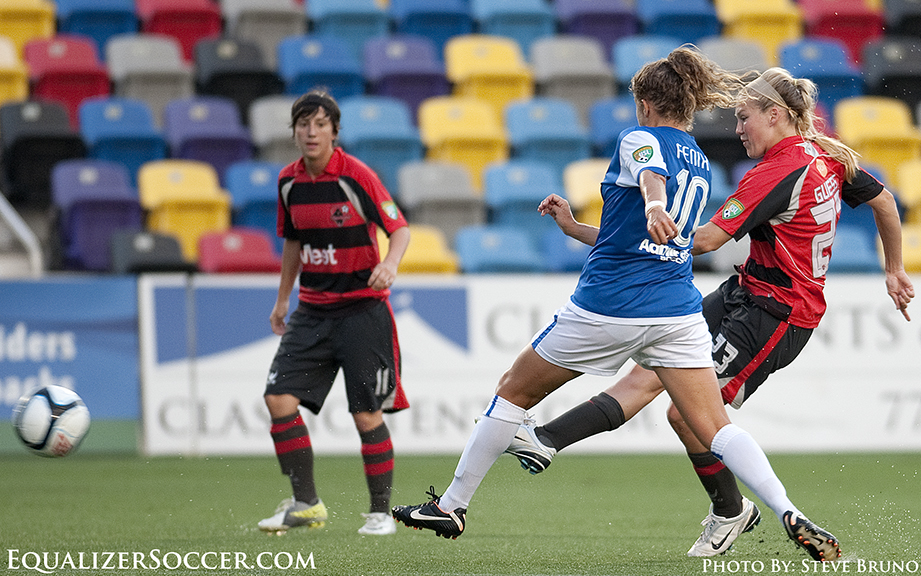 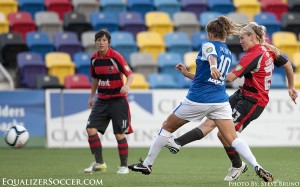 The Atlanta Silverbacks (7-0-1) dealt division leaders Charlotte Lady Eagles (7-1-2) their first defeat of the season Friday night in Atlanta with a 1-0 victory. A goal from Libby Guess in the 18th minute put the Silverbacks in an enviable position following a critical home-and-away series against the Lady Eagles which sees Atlanta move one point behind Charlotte with two games in-hand.

On the heels of a hard-fought 2-2 draw in Charlotte, the Silverbacks had a week to prepare for the return match, making sure the Lady Eagles didn’t repeat their early dominance which saw them go up by two goals in less than twenty minutes.

Atlanta head coach Chris Adams accepted blame for the team’s early lack of sharpness in that game, saying the standards in practice that week had dropped to an unacceptable level: A problem he vowed to immediately remedy.

“We had a great week of training,” Adams said, “and, as always… that carries over.”

Adams had seen the team come out flat in the last few games, whereas early pressure and scoring were a hallmark of the club at the beginning of the season.

“We had to get geared up a little quicker in training,” the coach said. “We… got into some stuff that made us be sharp mentally (and) physically a lot quicker in the training sessions. (The team) came very ready, very eager to make some adjustments from last time.”

Back in action this week were center back Ronda Brooks, goalkeeper Ashley Baker and midfielder Jamie Pollock, who returned following a leg injury in the season’s second match. Libby Guess dropped back into the center of midfield as forward Rachel Garcia took her place at the top of the front line.

Charlotte returned a big gun of their own as leading scorer Leah Fortune got her first taste of the Atlanta-Charlotte rivalry.

The game picked up where last week’s game left off with each team matching up well and getting decent chances in the attacking third.

Storm clouds loomed overhead, though, bringing lightning which halted the game 10 minutes in, ensuring neither team would settle into a real attacking rhythm.

A rain delay two weeks prior in Jacksonville saw a rejuvenated Atlanta team take to the pitch after two hours on ice in the locker room. This week’s delay was just over an hour and the Silverbacks, again, came out on the front foot, pinning Charlotte back early as play resumed.

Within the first minute, forward Tiffini Turpin led a charge into the box as she challenged Charlotte goalkeeper Robyn Jones on a loose ball. Turpin scored in the previous fixture as she went one-on-one with Jones, getting the better of the ‘keeper for the game-tying goal. Jones was an impenetrable wall this time, gathering the ball under pressure and hanging on as Turpin bounced off her. Stunned from the impact, Turpin had to be helped up by the ‘keeper after a tense half-minute or so on the ground.

Minutes later the Silverbacks finally drew first blood as forward Rachel Garcia got into the attack, feeding a ball back to Guess just outside the 18-yard-box.

“We set that up great,” Guess said of the decisive goal. “Ultimately, what we want is for the forwards to hold it and play back into the midfield where we can have a shot. I just hit it low and hard… it was wet and I was hoping it would skip in and it did.”

Guess’ 18th-minute strike was her fifth of the season, as her play and leadership on the field continue to make her case for team MVP.

“Elizabeth Guess was fantastic,” Adams said after the game. “(She) was just all over the field.”

With the assist on the play, Garcia moved into a tie for sixth in the league with her third of the season. The high school senior would be unable to influence the game any further, though, as a sliding attempt for the ball near the goal saw her get up limping and sub out immediately after.

Atlanta had a chance to widen the gap before the end of the half as a cross in from the left flank by Kristin Burton found Turpin on the far post. Turpin struck a superb side-footed volley, but Jones, anticipating the play perfectly, again foiled the Atlanta forward as she fearlessly blocked the point-blank shot, keeping her team in the game going into the half.

Charlotte’s best chance came in the second half as a 58th-minute shot from distance had an outstretched Baker beaten, but deflected down off the crossbar and back into the box before being cleared out by the Silverback defense.

Baker says, although the frame was rattled, the defense wasn’t.

“Whenever they were coming at us, we just weathered it,” the ‘keeper said of Charlotte’s second-half pressure. “(We) didn’t feel threatened really, we felt comfortable.”

Although Baker and Brooks each missed the first game against Charlotte, they were well-prepared to step up for the big game.

“Since I was away, I just spoke with the defense and just kind of got a feel for their tendencies,” Baker said. “They like the through-ball and over-the-top, so I just played a high line. Our backline just communicated and stayed organized… we really didn’t have any issues.”

Adams was pleased with the U-23 England international’s return to the team.

“It was nice to have Baker back at the helm,” the coach said. “She just communicates and commands the defense.”

Adams also highlighted the superlative performances of both center backs Ronda Brooks and Bailey Powell, adding that Powell showed her “coachability” by immediately cleaning up a few first-half mistakes to have an excellent second half.

In the final minutes, Atlanta dropped into a 4-5-1, willing to play conservatively and take the one goal win. Adams concedes, though, he had to “put the reigns” on Nikki Hill, as the left back was still eager to get up the flank into the attack while the rest of the team dropped back.

The game played out as an end-to-end affair, with Atlanta players taking the ball to the corner, yet still creating dangerous chances instead of stalling. Charlotte countered immediately whenever regaining possession, getting several other chances downfield, but Baker and her defenders held fast for their sixth clean sheet of the season.

The Silverbacks will have little time to pat themselves on the back after taking this crucial step toward another division title. The team heads out to Columbia to face Central South Carolina Cobras for the third time this season, but the first outside of Atlanta.

The Cobras have given the Southeast Division fits in their inaugural season, losing each game to the Silverbacks by a single goal while fighting back heroically to draw against Charlotte for the Lady Eagles’ first dropped points of the season.

“This is definitely that ‘trap’ game,” Adams said of Saturday’s match. “Central South Carolina didn’t play today. We played a very hard-fought match where the majority of our starters were on for very long minutes, so we’re going to have to be very tactically sound tomorrow (and) let the ball do a lot of our work.”

Adams says the series of back-to-backs has the team prepared, though, as players have learned to manage their time over the long weekends. The coach will also lean on the team’s battle-tested bench to fill a few voids, even adding two new “secret weapons” to his roster.

“To complete the weekend, we need one more result, so we’ll be focused.”