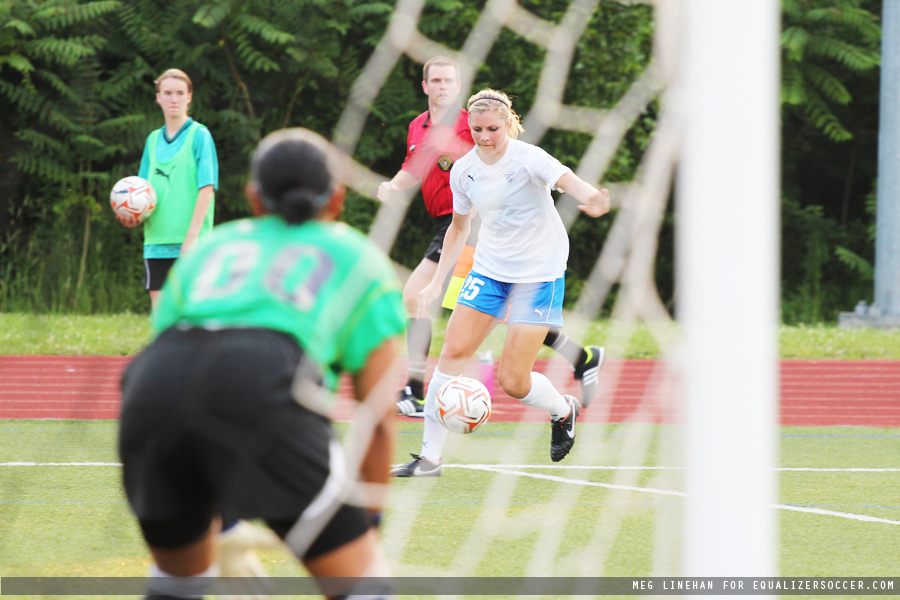 Taryn Hemmings and the Boston Breakers moved back into a tie for first place in the WPSL Elite League on Wednesday with a 4-2 win over the New England Mutiny. (Photo Copyright: Meg Linehan)

SOMERVILLE, Mass. — Temperature at kickoff on Wednesday just outside of Boston was 96 degrees as the Boston Breakers defeated the New England Mutiny 4-2. Kyah Simon, one of the Breakers’ Australian internationals, earned the second-ever hat trick for a Breakers player in the game with goals in the 41’, 45’, 66’, while Katie Schoepfer added a fourth Breakers goal (49’). Riley Houle and Katie Howarth scored for the Mutiny. New England struck first in front of 2,147 fans at Dilboy Stadium, but after Boston equalized and went ahead the Mutiny was unable to get back in the game.

In the 12th minute, there was a defensive breakdown for Boston in front of its own goal. The breakdown left a loose ball in the box that Breakers’ goalkeeper Alice Binns came out to challenge, and Houle was left with an open net that she finished into, getting her second goal of the season. After a slow start to the game, the goal may have woken up the Breakers.

“I think it caught us a bit off guard and we were not expecting it at all. There haven’t been many games that we’ve been down 1-0 within 20 minutes or so. It got us to really kick into gear,” said Simon about the Mutiny’s first goal.

Schoepfer also talked about coming back from the Mutiny goal.

“We came out a little bit slow, and it was hot out here and everybody just was in their own world. But then as soon as the goal happened, we snapped together and showed the kind of team that we are, that we’re going to fight back even when we’re down,” Schoepfer said.

The Breakers continued to attack as the half rolled on, but didn’t get on the scoreboard until the 41st minute when Schoepfer passed off a great through ball to Simon, who finished her first goal of the night. That goal was Simon’s fifth of the season, and four minutes later she added her sixth. In the 45th minute, Courtney Jones crossed the ball into Simon who was waiting in front of the net to put the Breakers up 2-1 going into halftime.

Breakers’ coach Lisa Cole did not think her team looked strong in the first 45 minutes, and told them that at halftime.

“I think it was more about our quality, and that’s what I said to them at halftime, it’s about us. We have to be better, and if we’re better, than this game will go the way we want it to go, and if we stay the same then it may be a battle,” said Cole.

The Breakers responded by tacking on another goal early in the second half. In the 49th minute, Jones got off a beautiful pass to Schoepfer who dribbled around the defense but was tripped up in the box, leading to a penalty kick. Schoepfer buried the PK to get her sixth goal of the season and put the Breakers up 3-1. Schoepfer is confident at the penalty line, having now taken the only two of the season for Boston.

“Leslie [Osborne, Breakers’ captain] just always asks if I want to take it, and of course, as a forward, I’m going to say yes,” Schoepfer said.

The Mutiny tried to get back into the game ten minutes later when Kelsey Hood played a ball into Howarth, who put away her team-leading fifth goal of the season, bringing the game back to within one. The Breakers would put the game away, however, in the 66th minute when Jones got her second assist of the game with a long ball into the box to a waiting Simon, who headed in her third goal of the night. That was Simon’s seventh goal of the season, making her the leader in WPSL Elite.

The hat trick is also only the second-ever in Boston Breakers history, which spans three leagues. Norwegian Dagny Mellgren is the only other player to score a hat trick for Boston. She did so in the WUSA era. Shoepfer had scored a hat trick in the May 26 game against the Western New York Flash, but that is now null after the Breakers were forced to forfeit the match on Monday due to the use of an ineligible player.

“I think as a striker you’re always thinking hat trick whether you’ve got one or none [goals],” Simon said. “But definitely having two I have it [hat trick] in the back of my head. I was thankful the third goal came and at the end of the day I scored a hat trick.”

Simon does not take all the credit for the goals, however.

“I think mainly it’s the service that you get, so I’m just the lucky one on the end,” she said. “Both Shep [Schoepfer] and Courtney set me up for really good goals. All the credit to them for setting me up, but at the end of the day, it’s a team goal.”

Cole also talked about the offensive mindset of the Breakers’ defenders.

“I think that’s been something that’s always been part of the Breakers, even before with Tony and Alex Scott getting forward and Stephanie Cox playing the ball in. So we’ve these young backs, we’re trying to instill the same thing, that if you want to play at the international level and make that next step, you can’t always be just a good defender, you need to be a good attacking player. And Courtney Jones actually played for UNC as a winger, not as a back. We’re training her to be a back with attacking instincts. You saw that tonight,” Cole said.

With the win, the Breakers move up into a tie for first place with the Chicago Red Stars, with 18 points each. Boston is back in action at home this Saturday against the New York Fury at 6 p.m. ET.

WATCH: Kyah Simon talks to Meg Linehan about her hat trick, playing in the heat and the schedule ahead: